We could use the laughs. 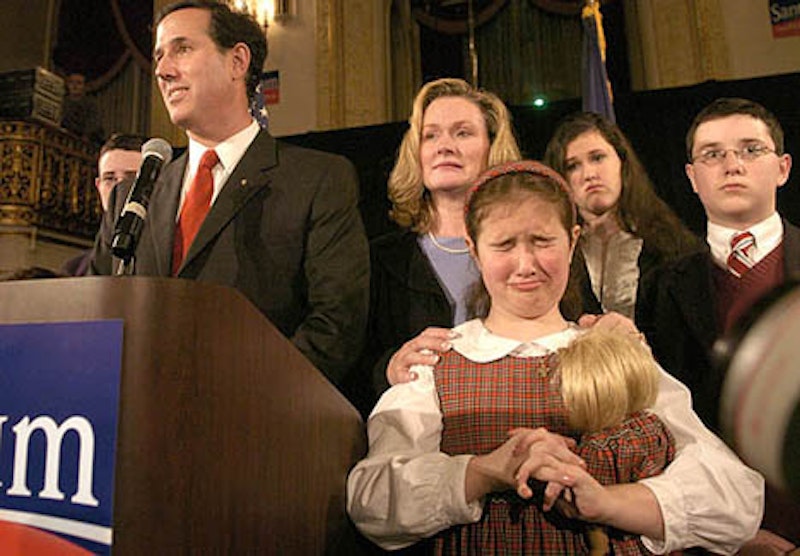 Since the 2010 elections are now a distant memory, and we're left with boring actual policy for the next nine months or so, let’s talk about the 2012 presidential race, the only fun right now in American politics. But 2012 is shaping up to be a dull season. I'm unconvinced that Barack Obama has anything to worry about, and other than a few delusional loonies, I don't think anyone in the Republican party is convinced either. No serious contenders are going to run this time around, and we'll get another 1996, a bloodless re-election with token opposition while the other side rallies in anticipation of 2016. The only alternative to boredom is a Sarah Palin candidacy, which is too stomach-churning to even qualify as dark comedy.

What I crave is the high-wire laughs that only the full-tilt raving monster that is a presidential campaign can provide. And so I hope and pray that former Pennsylvania Sen. Rick Santorum puts his money (or, more accurately, his donors' money) where his mouth is and really makes a go at the White House.

Santorum has been sniffing around the 2012 race since at least the beginning of last year, when he sent a letter out to the supporters of his Political Action Committee, America's Foundation, declaring that he’s considering a White House run. And with the nation deep into the 2012 campaign season (it officially started halfway through the first commercial break during coverage of the 2010 election returns) Santorum is taking every opportunity to get out in front of voters and gain some early ground.
His response to the President’s State of the Union address, published last week in the Manchester’s Union Leader, was tepid boilerplate, a rote run-through of standard Republican lines regarding the Obama presidency. It was far from Santorum's greatest hits—the man who as a U.S. Senator had no compunction about blaming the Catholic molestation scandals on the lax liberal social morays of Boston; who went on national television and likened homosexuality to bestiality and incest; and who had no problem making political hay out of his wife's 20-week old miscarried fetus (Santorum made the hospital change the form to read "20-week old baby"), speaking to reporters of how he brought the fetus home and had his three children, aged one to six, touch and cuddle with it.

That's the Rick Santorum I want to see, the one who could make the run-up to 2012 worthwhile all on his own. And we got a glimpse of that Santorum the week before the State of the Union, when during an interview with CNS News (a conservative web outlet), he hit at Obama on abortion by saying, "I find it almost remarkable for a black man to say, 'Now we are going to decide who are people and who are not people.'" The statement itself is not so ridiculous (it's really the logical extension of an anti-abortion worldview) but it's that kind of aggressive scorched-earth culture war rhetoric that lost Santorum his Senate seat in 2006. If Santorum thinks he's doing himself any favors by resurrecting it for a presidential race—where every Republican in the primary will be de facto pro-life, and the general election will be decided not on culture issues but the economy and foreign policy—is a testament to the kind of zealotry that makes Santorum so thoroughly entertaining. He’s like a guy who’s locked out of his house, and instead of looking for an open window, is relentlessly smashing himself against the door.

That Santorum is even running at all is a huge boon to my mood. That he's taking it seriously enough to hire key campaign staffers in Iowa and New Hampshire makes me kvell with joy. It takes a certain delusion of grandeur for anybody to run for president, but Santorum is just plain nut. He's a dweeby-looking guy with a weak chin who got tossed out of the Senate for being a jackass, and whose last name, when Googled, turns up as a first result the definition "santorum (san-TOR-um) n. 1. The frothy mixture of lube and fecal matter that is sometimes the byproduct of anal sex." Yeah, Richard Nixon was a failed presidential and gubernatorial candidate in 1968 and Barack Obama's middle name is Hussein—surprises can occur. I hope that Rick keeps those surprises in mind, and takes them as inspiration to ride this campaign all the way to the end. Like millions of Americans, I could use the laughs.