How Does America Recover From This?

I still stubbornly believe in a non-cynical version of America, but after Wednesday's debate, I wonder if I'm just delusional at this point. 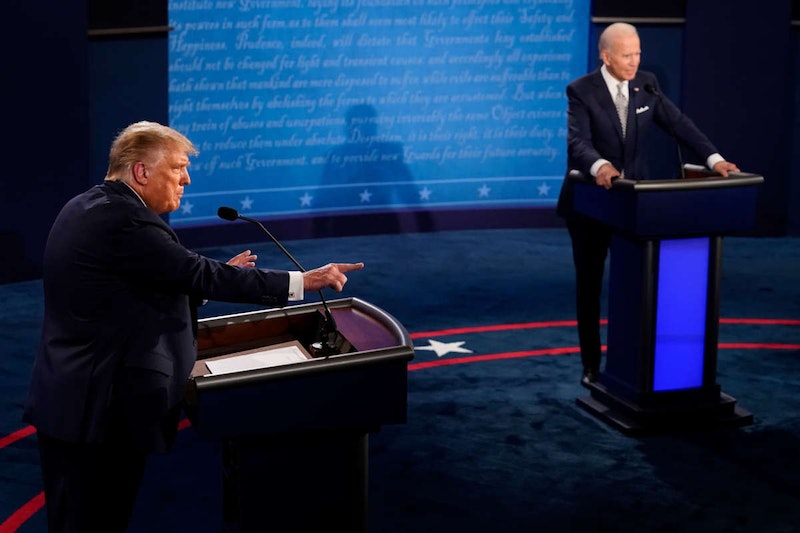 The disturbing and illiberal nature of the first 2020 Presidential debate has left me shaken along with a lot of other Americans. This display of unthinking, undemocratic shouting has reinforced my sense that the marketplace of ideas in the U.S has gone away with the decorum that supported it. I'm conditioned to expect propriety, even if my better judgment tells me Trump’s involved and so anything’s possible. But I can't lay all the blame on Trump for this new low.

Trump relies on dark, feral, pathological currents of in our national psyche because they’re his sources of rhetorical power. As the incumbent, he has a record to defend, but the last four years haven’t been positive, certainly not in the eyes of the majority. As Ryan Lizza observes, "Trump, the king of powerfully simplistic political branding, no longer seems to have a message."

The agenda he released for his second term is as functionally meaningless as it is partisan, justified on his website as "optimistic" as opposed to Biden's "gloomy": "President Trump’s boundless optimism and certainty in America’s greatness is reflected in his second-term goals and stands in stark contrast to the gloomy vision of America projected by Joe Biden and Democrats”—an ironic offering by the author of American Carnage. Optimism without practicality approaches a kind of empty delusion.

Are we all politically deluded now, looking for shared meaning and exchange through broken traditions and disconnected channels? I've came away from the debate feeling that the polarization in American politics has gotten worse, something I didn't think possible. Moreover, the great handwringing, lamenting mass of pundits and opinion journalists is more neurotic and less thoughtful, their braying more ear-shattering.

Caught up in the stress of the moment, I tweeted, "This is brutal," and responded to Dan Rather's, "This is much worse than herding ants; it’s like trying to pacify an ocelot" with "I'd take my chances with the ocelot." But compared to the doomsaying pronouncements I saw posted during the debate, that was light fare. The country had yet another schizoid break with no relief in sight.

In a tangible yet darkly simplified sense, Biden and Trump have become the avatars of their parties. Biden said, "I am the Democratic Party," even though he’s primarily aligned with its increasingly drowned-out, moderate, institutionalist aspect. Similarly, Trump could say, "I am the GOP," even though many Republicans have dismissed his debate performance (as if it were merely the latest obnoxious scandal, row, or meltdown on a long tiresome list) as unseemly and unpresidential.

But it's impossible to extract Biden and Trump from this moment in politics. Bothsideism and nuance, particularly after this jarring non-debate, overlook the fact that these two have become the Yin and Yang of performative American politics. Like an alchemical experiment bound to burn down the lab, the election has to run its course. It will combust. It will fulminate. Getting burned may be inevitable. We only hope no one gets killed in the process.

Because Trump is President, we're bound to take him at his word, to take his utterances seriously, even though we know we shouldn't. If he refuses to denounce neo-Nazis, suggests that his supporters go to polling centers, and refuses to say he’ll respect the outcome of an election he's already decided will be fraudulent, we can't overlook it. While I think apocalyptic fortune telling about the country descending into race war and the collapse of civil order is stupid, I worry about lesser conflagrations: innocents getting harmed in further riots, voter intimidation, the further derangement of the body politic, and Amy Coney Barrett not recusing herself on election-related cases, resulting in protracted legal erosion.

In 2016, I wrote about the Trump-Clinton debate in Baudrillardian terms, calling it "a sad continuation of the long, slow-motion fall of the South Tower caught on video, perpetually collapsing, the whole world watching the smoke, loading their hand cannons, waiting by the window for some horrible, inevitable end." Looking at my article, writing and thinking back over the last four years, I feel like I had a moment of clarity, of prescience, even though I've doubted my perceptions and judgment many times since.

Our collective political education continues, but I remain willing to stubbornly believe in a non-cynical version of America in which political compromise produces the highest quality of life for everyone. Unfortunately, I also have to wonder whether I, too, am delusional and things really are as bad as they seem.