The first presidential debate of 2020 was a stunning spectacle of cruelty that was inconceivable just a few years ago. 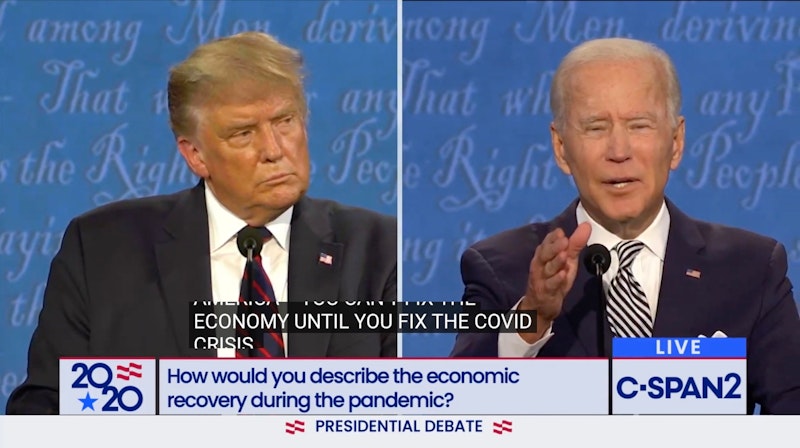 Back during "the transition," people said they hoped that Trump would grow into the presidency, slowly merging his own into the line of decorous, if somewhat dull and implausible, presidential personae. He's been growing, alright: growing Trumpier by the day. I don't know whether we reached max Trump in last night's debate, but we've got to be getting pretty close. Mainstream commentators still try to be surprised that he's so "unseemly" and "unpresidential," as the mainstreamiest, the Post's Dan Balz, put it again in his instant assessment. But we've had years of non-stop unseemliness.

At this point, to really make the unpresidentiality register, to restore its power to refresh and shock and throw his opponents off their stride, Trump seems to have concluded that he needs to escalate it steeply. The way he talked to Biden on the debate stage–constantly interrupting and hectoring, drifting through a litany of invented charges–made even the way he debated Clinton in '16 seem seemly.

I'm not sure how that played, though everyone (even Chris Christie) appeared to agree that Trump was "over-amped," that he "came in too hot." "He may well have ended his presidency tonight" said David Axelrod on CNN, but though I hope his presidency is soon over, I'm not sure he lost it last night. One thing that "America" hired Trump to do was smash political rhetoric, which in previous decades had grown entirely false and entirely boring, designed to conceal everyone involved in a cloud of seemly commonplaces. Jeb Bush and Marco Rubio were completely bewildered when Trump gave them just the leading edge of his unseemliness.

By the time last night rolled around, Biden had been rehearsing for days to do better than Jeb. Joe is definitely rattleable, but he was also braced, with a head full of advice on how to deal with the insults, red herrings, fabrications. To try to have the effect on Joe that he had on Jeb, Trump jacked up the volume, almost beyond belief, and well beyond Chris Wallace's ability to shape the argument.

This may have been a bad plan, and certainly it made for a disturbing and depressing spectacle, overall. I don't know what your Twitter may have looked like during the debate, but mine was an endless procession of "this is so depressing," "look what America's come to," "remember norms?" and the like. And Biden didn't exactly achieve a redeeming vision, even if he did manage to survive. The bracing and rehearsal helped, I'm sure, but even with all of that, Biden looked shaken at times.

If Trump was Trumpy, Biden was Bidenish, his syntax fractured, his grasp on the facts thin. A typical Bidenish formulation: "There’s systemic injustice in this country, in education and work and in law enforcement and the way in which it’s enforced." At least he didn't throw two random "in fact"s into that sentence. Even more than usual, a dozen times or more, Biden the enumerator did his "number one, number two," with the items often unrelated, or formulated without any sort of parallelism. "There is no manifesto, number one. Number two....." well, there is no number 2. At one point he went straight through "number two," without actually formulating a second item, to "number three." This gave Trump his only decent insult of the evening: "No, you're on number two, Joe." I wish the abuse was more along these lines than, say, stuff like the claim that Hunter Biden made "billions" of dollars overseas. That's easy for Joe to deny. That he's making sense is going to be a harder sell.

And even as he tried to be firm, Biden also tried to evade controversy in the tried-and-true Clinton/Obama style. Wallace (and Trump) asked him whether he's in favor of court-packing. "Whatever position I take on that, that'll become the issue," he replied, taking none.

But Biden also showed that in some sense Trump really has smashed the last vestiges of decorousness in American political speech. He didn't exactly take the approach of rising above it all. He called Trump "a clown" and "this clown" on several occasions. "Everyone knows he's a liar," said Joe. "You're the liar," replied Trump. On Covid, Biden went with "Because guess what? A lot of people died and a lot more are going to die unless he gets a lot smarter, a lot quicker." Trump gave this back: "Did you use the word smart? So you said you went to Delaware State, but you forgot the name of your college. You didn’t go to Delaware State. You graduated either the lowest or almost the lowest in your class. Don’t ever use the word smart with me. Don’t ever use that word." "Keep yapping, man," said Biden, which could have been worse.

Try to imagine an exchange like that between Obama and McCain in 2008, for example, or between Biden and Paul Ryan in 2012. Trump's non-strop transgressions, as well as the tone of Twitter, really have transformed American political rhetoric. I can imagine more uplifting transformations, however, and that was one unedifying spectacle.