Ignoring Joe Biden’s obvious cognitive decline is more disgusting and offensive than anything Donald Trump has ever said. 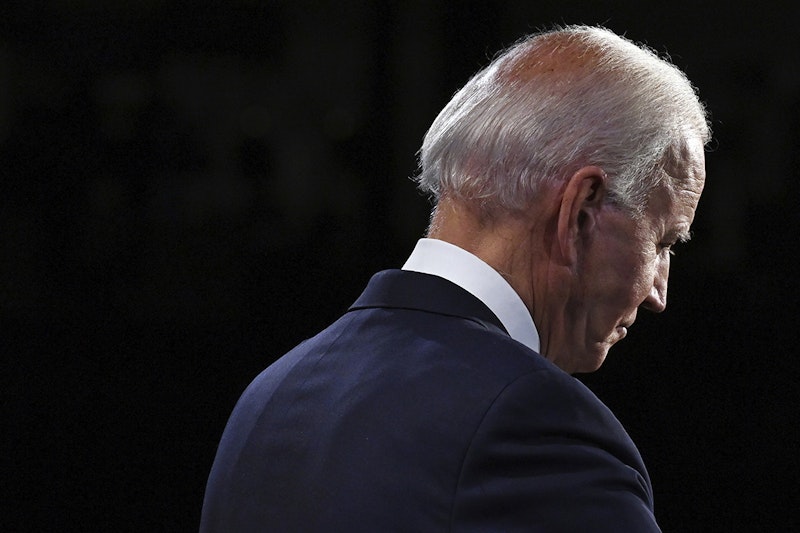 The C-SPAN debate in Cleveland, the first presidential debate of 2020, was the beginning of a new epoch in American history. We’re in the Coliseum now. I suggested in the weeks leading up to the debate that Donald Trump should ask Joe Biden to recite the alphabet, or spell “red.” Why not? Biden’s “cognitive decline” isn’t an open secret, it’s an open joke. Amber A’Lee Frost wrote this about Bernie Sanders nearly two years ago, in an article for Jacobin called “It’s Still Bernie”: “I don’t care if we have to roll him out on a hand truck and sprinkle cocaine into his coleslaw before every speech. If he dies mid-run, we’ll stuff him full of sawdust, shove a hand up his ass and operate him like a goddamn muppet.”

Of course I mis-remembered this as a comment on Biden from someone else, but good lord if you looked at that and told me it isn’t the DNC’s exact strategy right now against Trump, I’d spit at your feet, COVID be damned. Everyone that has eyes and ears can see Biden has been “slow,” to put it very generously, for the last four years at least. I’m 27, and my introduction to Biden was his early 2007 gaffe about Barack Obama being “clean” and “articulate.” I’m familiar with Biden’s tendency to say stupid things at the wrong time.

That is not what has been going on this election cycle. Look no further than this clip of him in early 2016—the difference is night and day. Frankly I was surprised at how poorly Biden performed and how weak he appeared, considering his last debate with Bernie Sanders in March was by some distance his best debate of the 2020 cycle. But Bernie didn’t dare stick the knife in or even challenge his “friend Joe.”

Trump is, of course, another story. All moderator Chris Wallace could do was throw his hands up in the air and laugh, because Trump was ready to go from minute one, and refused to abide by the rules he and his campaign and agreed to. Wallace reminded him of this, and he nodded, mouthing “I know” before proceeding to break the rules again and filibuster. Why not? Fuck them. He’s the President. That was “modern day presidential.” If the candidate I support is getting blown up with a bazooka, I’m not going to hem and haw over whether I should draw up a resolution or challenge him to a duel in the parking lot at 3pm with closed fists but nothing in the face. The DNC thinks they can give Trump enough rope to hang themselves, but they’re the only ones left hanging out to dry after that disaster.

This idea floated now about microphones cut at the next debate—next Wednesday’s veep square-off—is completely insane and counterintuitive if you want Trump to lose. As his reelection seems more and more likely, and after his legacy has already been minted with the unprecedented appointment of three Supreme Court Justices, anti-Trump Americans are finding it increasingly harder to accept and, more importantly, operate in reality. You can’t cancel previously scheduled debates because one of the candidates was “too mean” or “too loud.” You can’t cut the mic of either candidate. Besides, these are mean, loud, and dumb times. Why shouldn’t the debates reflect this?

But we knew what Trump would do, and he laid into Biden more than I thought he would, interrupting him constantly and trying to confuse and trip him up. I joked that Trump would ask Biden to “spell ‘red’” as Howard Stern once asked Beetlejuice, and he actually did brush off a Biden comment with this reply: “You don’t remember much.” And he doesn’t.

What the DNC is doing with Biden, clearly ill, is so demented and beyond cynical, far more offensive than anything Trump has ever said. The guy isn’t Reagan 1984; he’s Reagan 1994. If ever the 25th Amendment applied to someone, it's Biden 2020. What the Democrats are doing is so disgusting and shocking, and not from a political standpoint—remember that JFK went through the entire Cuban Missile Crisis high on amphetamines and horse semen—but as a human being, the whole thing made me sick. I have no affection for Biden, but how fucking dumb do you think people are? The guy is GONE.

“The biggest defeat in every department of life is to forget, especially the things that have done you in, and to die without realizing how far people can go in the way of crumminess. When the grave lies open before us, let’s not try to be witty, but on the other hand, let’s not forget, but make it our business to record the worst of the human viciousness we’ve seen without changing one word. When that’s done, we can curl up our toes and sink into the pit. That’s work enough for a lifetime.”

Trump and Biden were born a decade after Céline wrote those words in Journey to the End of the Night, born, in Biden’s case, during World War II (1942), and in Trump’s, just after (1946). By this point, Céline had laid himself down in the mud and dried himself in the air of crime by collaborating with Vichy France and publishing anti-Semitic pamphlets and tracts that, I’m not kidding, Nazi officials considered “too extreme.” He died a pariah with a compromised legacy, but with enough first-hand accounts of the everyday crimes of humanity to last many lifetimes. Céline’s anti-Semitism was not caused by early stage dementia, even if everyone came back from WWI with their brains vibrating in their skulls. It was exactly the “human viciousness” he wrote so beautifully about in the 1930s.

“It’s hard getting a word in with this clown—excuse me, person, not clown.” Biden apologized for calling Trump a “clown” in the middle of the debate. This was after nearly an hour of verbal blitz from Trump. I don’t understand how or why the DNC continues to bring knives to bazooka fights. “Will you shut up, man” is not good enough. But really, there’s no story beyond the obvious: the DNC has nominated a sick, mentally incompetent man. Trump bulldozed through Biden, getting him to disavow the left and to say he doesn’t support the Green New Deal.

There is novelty in looking at car accidents, but it’s a really bad idea to make a habit of it.