1964-2020: From Free Speech to Policing Speech on College Campuses

The lessons of the Berkeley Free Speech Movement are forgotten. 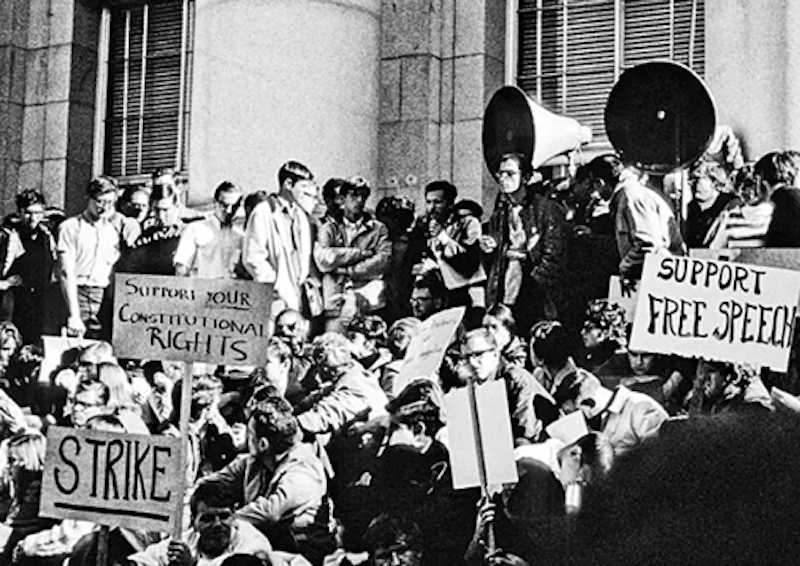 Fifty-six years ago today, UC-Berkeley grad student Jack Weinberg was arrested for setting up an information table in front of Sproul Hall to promote a group known as CORE—Congress of Racial Equality. Disseminating political information was banned on the Berkeley campus at that time, but students had had enough. Hundreds, and eventually thousands of them swarmed the police car holding Weinberg. They remained there for 32 hours until the police released him. Some firebrands gave speeches while standing on the squad car's roof. It was the first mass act of civil disobedience on an American college campus in the 1960s. Berkeley philosophy student Mario Savio gave a speech so powerful that he became the unofficial leader of the Free Speech Movement that was born on that day.

In 2020, it's difficult to imagine that, at one time, you couldn't hand out a few pamphlets promoting racial equality on an American college campus. In the 1960s, 94 percent of the nation's college students were white. That figure has dropped to 59 percent today. Diversity has both its strengths and its weaknesses, as we're now seeing.

Berkeley students fought hard, but peacefully, that entire academic year to win the right to express themselves freely. In the years that followed, American college students owed a debt to those rebels, but the zeal for free speech on our campuses hasn't endured. The Berkeley students agitated for the right to express political opinions, but some universities today define bias incidents as including expressions of bias against particular political affiliations. This is dangerous territory. These schools are encouraging their own students to squeal on others for making political statements that aren’t considered polite. As civil discourse has given way to outrage, free speech is viewed as freedom to oppress.

Freedom of speech is the fundamental, defining right of the United States as a nation, but it's fallen out of favor on the Left, which dominates American campuses to the point where those with dissenting opinions are often forced into self-censorship. This isn’t to say that college students in general now oppose free speech, but campus activists have learned that an outraged minority can impose their will on the open-minded majority just by making some noise; it's survival of the loudest.

One chilling campus development has been the swift rise of what are known as Bias Response Teams. These organizations consist mostly of administrators, especially those in Residential Life and Dean of Students offices. Faculty, staff, students, and anyone else on campus can report incidents of bias to the BRT, with an option of anonymity, which opens up the possibility of hoaxes or frivolous complaints. Here's a complaint from John Carroll University: “Anonymous student reported that African-American Alliance’s student protest was making white students feel uncomfortable.”

The stated aim of BRTs (also called BARTs, BERTs or BIRTs) is to foster a safe and inclusive environment by providing advocacy to anyone on campus who's been a victim of bias. This sounds innocuous, but there's an inherent tension in simultaneously promoting both the freedom of expression that higher education requires and the prevention of bias—a tension that BRT administrators are unaware of. Few BRTs have members who are able to instruct the team on the value of protecting speech rights and academic freedom. The result has been a bias towards restricting expression. BRTs rarely determine that a particular complaint does not qualify as a “bias incident."

There's little evidence that BRTs are trained on First Amendment issues. This opens up the problem of team members using a broad definition of "bias," which can lead to violations of constitutional rights related to protected speech, and opening BRTs up to lawsuits. In response to one of those lawsuits last year, a federal appeals court ruled that even though the University of Michigan's Bias Response Team might not be able to take disciplinary action against students, it may still have the ability to curtail constitutional rights on campus. The university's BRT can't force a student to meet with them, but it can refer incidents to campus law enforcement, the Office of Student Conflict Resolution, or the mental health counseling center. The court ruled that this power is a "real consequence that objectively chills speech." Shortly after, the University of Michigan dropped its BRT. It now only offers counseling to students who feel they've been the victims of bias.

Universities have developed a tendency to define bias in rigid ways that fail to take into account a person's motivations, and they sometimes respond with a draconian punishment. When Syracuse University professor Jon Zubieta referenced the “Wuhan Flu or Chinese Communist Party Virus” in his 2020 fall semester course syllabus, the school placed him on administrative leave and forbade him to have any contact with students. Zubiek said that his intention was to "mock the euphemistic conventions of PC culture" rather than ridicule Chinese people.

If a university's going to take such a hardline approach to policing language that only offends a few, then it has the responsibility to produce a list of verboten words and phrases. How sensitive are today's college students? An Italian-American UC-Santa Cruz student filed a bias complaint over a single poster advertising a campus "mafia" game. She claimed it could result in the harassment of Italian-American students. The school took the poster down.

While Berkeley students in the 1960s sought freedom, today's students crave comfort and what they call "safety"—safety from ideas that upset them. That's what's driving the support for BRT-led censorship, which produces dogmatism and fear. Colleges catering to coddled, sensitive students can’t equip them with the skills they'll need to handle disputes when they're outside of the campus bubble. Their job is to prepare young people for the future, not to create a temporary sanctuary for them.