The Debate Did Not Take Place

No one says what they're really thinking: there is no escape. 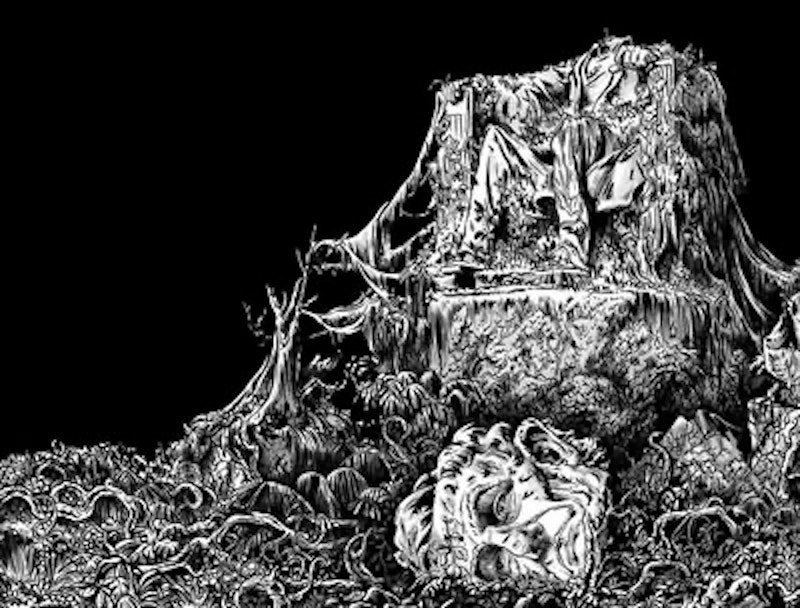 Walking through the 18th arrondissement on the final day of the Paris climate talks, I could feel electricity in the air, the hyper-vigilant static raised by 34,000 national police out for blood. A month earlier, ISIL had murdered 89 people at the Bataclan theater and 41 more in other areas across the city, making it the deadliest attack on the country since World War II. And the Préfecture de police seemed fed up, resonant with the emotional climate in Paris at that time—tense, exhausted, angry, and full of regret.

I wasn't there to write about the Paris Agreement, but that didn't matter. Everyone in the city was involved by default. Certain thoroughfares were barricaded. There were German shepherds and machine guns in the train stations. At Gare du Nord, I collided with an officer in a beret and fatigues who wore a low-slung .357 Magnum on his hip like a gunfighter. He smiled and excused himself, a certain gentleness in his face. I watched him drift through the crowd towards the Place Napoléon and wondered if he'd ever killed someone with that thing. Given his kind expression, both possibilities chilled me in different ways. This is how we live now, I thought. Even the gentle carry enough firepower to blow the shit out of an engine block.

Still, I'm an American. So I feel I must know the truth about guns and cops: the police aren't supposed to be your friend—even if, in reality, I have friends who are police and they happen to be some of the best people I know. In our national hallucination of what constitutes the common good, the police aren't supposed to be protecting and serving as much as putting law and order hollow points through anyone suspicious. Because this isn't reality. This is straight fantasy. And, in 2015, Paris seemed like it had finally entered the long brutal daydream that started 15 years ago on September 11 in New York City.

Now Paris cops wore .357 Magnums like Old West bounty hunters; though, no matter the arsenal, we'll suspect they're still out-gunned. And back in the States, we'll continue to assume there's a fugue state of perpetual militarized violence, race riots, and ugly pandemonium.

I had this in mind Monday night as I watched Trump and Clinton go at it in their first debate. I live in England now, meaning I had to stay up until the wee hours to catch the PBS live-stream. PBS because the only other live stream I could find was Fox News. And I can't look at the Fox logo without my face twitching in unnatural ways, my inherent distrust of all news media amplified by the nuclear heat of a million suns at what journalism in the States has become. My American friends joke about moving to Ireland, Spain, or Portugal if Trump wins or if Clinton wins. More fantasy. No one says what they're really thinking: there is no escape.

And so, at 2 a.m., London time, I logged on for more of our collective bad trip: the blowhard King of Debt reality TV star vs. the ruthless career politician obsessed with realizing her life's ambition—neither of them giving a rat's ass about their country, neither of them very good at pretending to be better than they are. One longs for Richard Nixon at a time like this. Sure, he was a crook, but he was a smart, capable crook no matter how trembly, vicious, and criminally insane he seemed in the end. I also got a little trembly around the time Trump started to defend “stop and frisk.” I couldn't stop thinking about that much-abused Stalin quote, “The death of one man is a tragedy. The death of millions is a statistic.” By this, I guess the deaths of Keith Scott, Terence Crutcher, Michael Brown, and Sandra Bland qualify as tragedies while the 2195 people killed by police in the States since Ferguson is closer to a statistic. I wonder how many more tragedies will add to that statistic if policies like “stop and frisk” go forward under President Trump?

But I may be thinking too much. They say in a train wreck the safest place is farthest from the middle because that's typically where the train folds in half. So, along with some of my smart terrified friends, I'd like to say, well, Clinton might be a corrupt obsessively driven careerist but at least she isn't an enfant terrible under perpetual IRS audit, known mainly for going bankrupt, defrauding business partners, and performing on reality TV. I'd like to defend her that much. But that's a hard pill to swallow, especially since neither candidate articulated much of a coherent plan for the country.  Instead, it was don't put Donald near the nuclear launch codes vs. Hillary is a bad person who doesn't have the stamina.

After the debate, I sat up, sipping tea until sunrise, unable to go back to bed. I couldn't stop thinking that in 1991, Baudrillard nailed it in The Gulf War Did Not Take Place. He argued the Gulf War wasn't actually a war. It was an atrocity that people called a war. It was an opportunity to experience hallucinatory propaganda with the media as the central figure.

So with this debate, which seemed like a sad continuation of the long, slow-motion fall of the South Tower caught on video, perpetually collapsing, the whole world watching the smoke, loading their hand cannons, waiting by the window for some horrible, inevitable end. This is how we live now. And our candidates are reflections of that life just like the Préfecture de police in December of last year reflected the shadow-self of Paris—public servants turned gunfighters in a long very bad dream.