A memo to Beltway insiders. 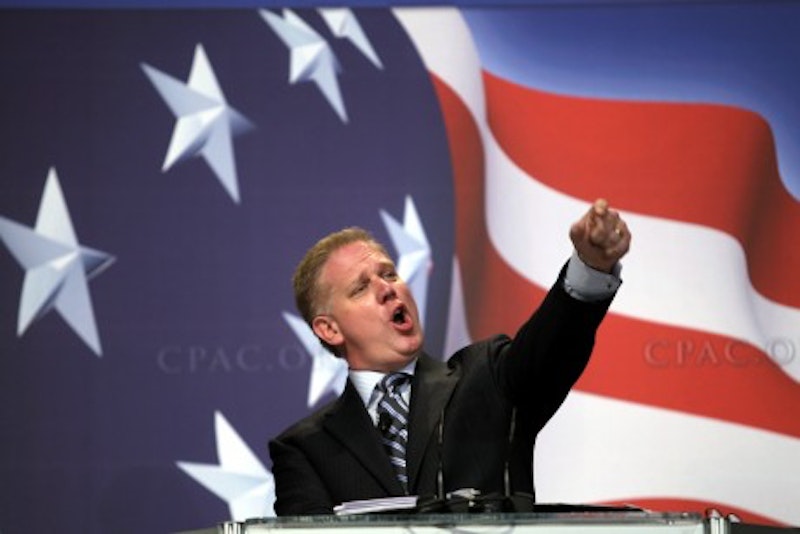 Head count: How many of you have even thought about entertainer/political provocateur Glenn Beck in the past six months? That’s what I thought, almost no one. Since Beck was exiled from his Fox News weeknight show last year, he’s a blip in the left-wing hate chamber of conservative evil-doers, which is fine by me since the man was a blubbering distraction, not worthy of serious consideration. Rush Limbaugh’s bad enough and one can only hope that his “slut” controversy will have legs, leaving him as more of a bit player in the upcoming presidential election than anyone imagined two months ago.

Nevertheless, Vanity Fair’s Todd Purdum, in the magazine’s May issue (pay firewall), insists that Beck could be more influential than ever, by dint of his radio show and Web TV broadcast that has 300,000 paying customers. Purdum writes: “Together with his radio rivals Rush Limbaugh and Sean Hannity, Beck is one of the three biggest forces in conservative politics. He is in the vanguard of that segment who worked so assiduously for months to deny the presidential nomination to Beck’s fellow Mormon, Mitt Romney—forcing Romney even further to the extreme right.”

That’s right, Beck is so “influential” that his shilling on behalf of this or that anti-Romney was so successful that the former Massachusetts governor has all but wrapped up the GOP nomination to challenge President Obama this fall. As for “forcing Romney even further to the extreme right,” that’s a mere follow-the-herd opinion that can be read every day; after all, discerning what Romney really believes on any particular day is mere guesswork. Romney, to his discredit, has zig-zagged through so many varying, and often contradictory policy pronouncements that I’ve lost count. You’d have to assume that his team of advisors, once he’s clinched the nomination, will sit Mitt down and present him with a right-of-center platform, focused on economics, and hope that he stays on script throughout the election.

Granted, the triumvirate of Limbaugh, Hannity and Beck do claim a sizable amount of disciples, but it still amounts to a fringe element of the Republican Party, not unlike liberals who rant that Obama is actually a political centrist disguised as a progressive. If Beck were to suddenly retire, become a recluse who makes do clipping coupons from the vast wealth he’s accumulated in the past decade or so, I doubt anyone would notice. As political analysts such as Charlie Cook, Larry Sabato and Stu Rothenberg remind their readers constantly, presidential elections are almost always decided by the 10-15 percent of the electorate that votes for the person and not necessarily the Democratic or Republican Parties.

Purdum, a Beltway resident who’s married to Dee Dee Myers, a former press secretary for Bill Clinton, has been tapped by VF to write the monthly’s “newly minted political column.” In his VF bio this month, Purdum says, “It will be a special treat to write about the enduring themes of our politics through the prism of this ongoing and ever changing election year.”

And it’s said that a can of Pepsi has no nutritional content!

Purdum’s clearly behind the curve. For example, The New Republic’s Timothy Noah, in his April 19 “TRB” column, trots on the same turf as Purdum—how the extreme right wing is dominating this election—and guess what, not once does he mention Beck (or Limbaugh and Hannity). Instead, he focuses on the “Citizens United” ruling by the Supreme Court, and after naming the new bad-government culprits—Foster Friess, Harold Simmons, Bob Perry and Sheldon Adelson—says, “Indeed, to a remarkable extent, these oligarch-controlled super PACs are the primary campaign.” I’ve written in this space that the focus on money this presidential cycle is misguided—it’s not as if the same candidates wouldn’t have run for the nomination without the Supreme Court’s contentious 2010 decision—but to unabashed liberals like Noah that’s the crux of this year’s campaign. Not Glenn Beck.

Paul Krugman, the left wing’s reigning media superstar, wrote today in his New York Times column about this campaign, and he too, didn’t mention Glenn Beck. Krugman, not for the first time, pointed to Republican Rep. Paul Ryan as an example of how deranged conservatives are in 2012. Ryan, according to Krugman, is “a garden-variety modern G.O.P. extremist, an Ayn Rand devotee who believes that the answers to all problems is to cut taxes on the rich and slash benefits for the poor and middle class.” One assumes this was written from a perch in Zuccotti Park—another 1% fellow preaching to the 99%—but perhaps that’s too cynical.

In any case, if Todd Purdum is working on a book about Beck (and that’s what it smells like), fine, but his conclusion that the radio/TV blowhard is influencing this election is just off base.