Can We Afford Obamacare?

It's worth the risk. 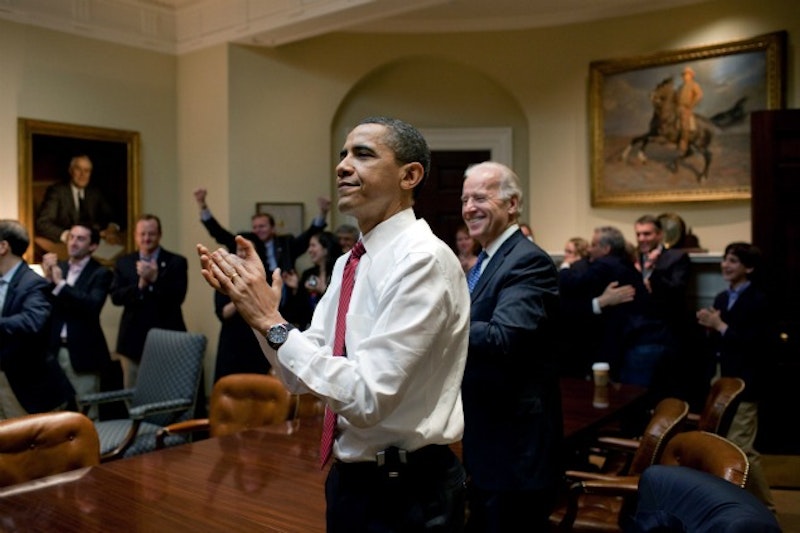 Obamacare may be little more than a munificent gesture in a pauper’s will. While the nation awaits the Supreme Court decision on the Affordable Health Care Act, the landmark social legislation could turn out to be exactly the opposite: unaffordable. The sheaf of good intentions may become the victim, as is often the case, of unintended consequences. Truth be told, right now nobody knows whether Obamacare will work.

Cynics, of course, made the same case against Social Security and later Medicare. The difference is, however, that both of those programs are based solidly on taxes that everyone pays into the system. The centerpiece of the Affordable Health Care Act is the individual mandate that requires everyone to purchase health insurance or pay a small penalty in its absence. The mandate is the core of the legislation and the source of the most controversy in the courts. The mandate has been upheld as constitutional by two appellate courts. As The Washington Post’s policy wonk, Ezra Klein, observes: “Think of government as a giant insurance company with an army.”

Put aside the Obama Administration and the high court for a moment and hear the actuaries and the providers who’re trying to make the numbers work. Don’t be swayed by arguments that Obamacare is akin to the forcible purchase of broccoli. Forget about Rep. Paul Ryan (R-WI) who wants to scuttle Medicare and Medicaid. And ignore the large percentage of Americans who want the law to be overturned and abandoned. (Disclaimer: Count me among those who support universal health care and a single-payer, government-run system—Medicare for everyone—the approach that President Barack Obama initially favored but was unable to push through Congress. I hope that the court upholds Obamacare and that it works to drive costs down.)

Maryland is a terrific place to get sick, if you must. The health care, insured or not, is among the very best. Right now, every Marylander, and presumably every American, who has health insurance pays an extra $1000-$1100 a year into a money pool to cover the uninsured. In Maryland, the cost of reimbursing hospitals for uncovered health care in emergency rooms and other settings ranges upward to nearly $1 billion a year for those without health insurance. That amounts to about seven percent of the fees that go to hospitals for uncompensated care. No one can answer, for the moment, at least, whether the $1000-$1100 surcharge for the uninsured, and the nearly $1 billion for uncompensated care, will end or whether it will offset any increase in the cost of health care.

Maryland has a one-of-a-kind system. Its hospital costs and health care rates are set by the Maryland Health Services Cost Review Commission, a system that helps keep down the cost of health services as well as to monitor the financial performance of hospitals. The commission also oversees the revolving fund that reimburses hospitals for care of the uninsured.

Now enter the rarified world of wonks, actuaries and insurance ratemaking. The formula for setting rates for those who purchase insurance is a complex hieroglyph involving gender, age and overall health, i.e., young women pay more than young men, old men pay more than old women and those with a history of poor health are assigned to a risk pool where they pay the standard rate plus 25 percent. Smokers beware: You pay a premium for health insurance because of your stupidity.

Obamacare is designed to eliminate consideration of pre-conditions as a qualification for health insurance and to prevent insurance providers from cherry-picking clients. Under Obamacare, everyone qualifies for coverage and that’s the problem, according to the bean counters. There are 22,000 people in the risk pool in Maryland, the Maryland Health Insurance Program. There are also 700,000 Marylanders, give or take a few thousand, with no health insurance at all. This group is generally composed of individuals and families in the gray zone who earn slightly above the federal poverty level but are not qualified for Medicaid, the federal-state medical program for the poor. They will receive the greatest share of the federal subsidies.

Under Obamacare, states would set up exchanges through which individuals and small businesses could by health insurance at favorable rates. Maryland’s are already underway, and the General Assembly has passed legislation to establish the exchanges. So far so good. Now here comes the cropper. If those 700,000 uninsured individuals and the 22,000 high-risk persons are lumped into the exchange pool it will, as the actuaries say, “pollute the pool” because the near-poor and the health-risk clients require far greater health care expenditures than the average healthy person. Another great unknown ingredient is how many small businesses might decide to eliminate employer-based health care by simply handing employees a subsidy and dumping them into buying exchanges.

No one knows how employers and employees will react. Such a massive shift all at one time makes the outcome unpredictable. But one point most professionals agree on is that health care premiums will skyrocket, some say nearly double. If Obamacare survives the Supreme Court, in part or intact, it is scheduled to be in full force in 2014. Many sections of the law are already in effect and nullification by the court would no doubt create mayhem. The most skeptical and pessimistic among health care providers expect the system to totally collapse within three years of its implementation. By then, it is estimated that the program will cost some providers at least $100 million more a year to cover clients, a cost that will be passed on to health insurance policyholders.

That said, presidents have been trying to enact some form of universal health care for nearly a century, dating back to the days of Theodore Roosevelt, Franklin Delano Roosevelt and even Richard Nixon. Bill Clinton came close in the 90s with Hillarycare and it was another 18 years before Obama took up the cause and finally succeeded. Among advanced nations, America is probably the only remaining country with a totally for-profit health care system that is run by actuaries and not the medical profession.

Despite the skepticism from some, there are many desirable elements to Obamacare. Important among them is that insurance companies can no longer deny coverage based on pre-existing conditions; the individual mandate; the elimination of the limit on life-time benefits; closure of the so-called “doughnut hole” in the Part D Medicare prescription program; preventative care medicine; allowing parents to carry young adults on their policies until age 26; tax credits for small business; and insurance companies are now required to spend 80 to 85 percent of their premiums on actual health care. That last part, in itself, comes close to health care being about health and not about profits. All in all, it sure beats what’s out there now. The question that remains to be answered is whether we can afford it.