The New Yorker quietly pulls on its hoodie. 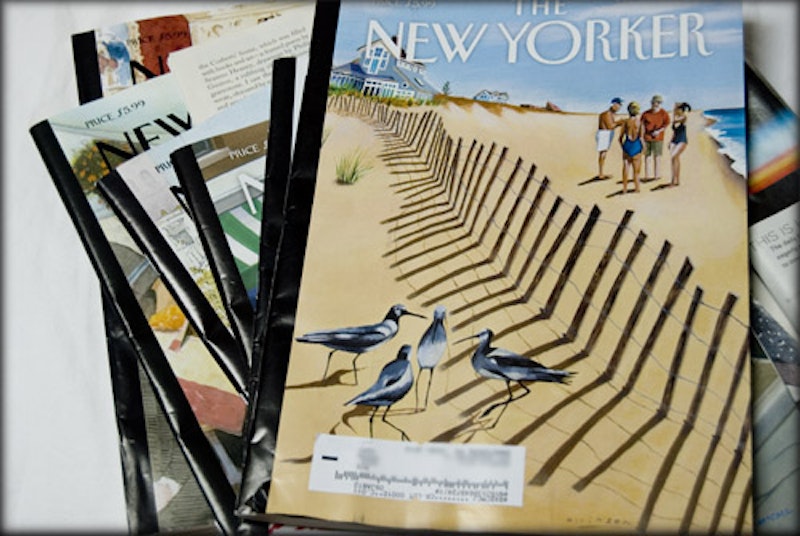 The April 9th edition of The New Yorker is identical to the issues preceding it in most ways that matter: it is arch and aggrieved in tone, knowingly quixotic, self-amused and eccentric, plugged-in and Ivory Tower imprisoned alike. There are delicate dissections of ExxonMobil’s political reach, the modern sporting scene, the Supreme Court’s likely kneecapping of Obamacare, an earnest defense of NBC’s Awake, an even-handed review of the new Whit Stillman film. The magazine’s signature design aesthetic—three solid columns of text on non-splash photography pages, all else be damned, pretty much—continues to reign supreme. Intentional aberrations are factored in, of course: cerebral cartoons, a pince-nez contemplating mascot straddling the masthead, felicitous doodles peeking unobtrusively from fastidiously edited thickets of erudition. Like Jeff Bridges in The Big Lebowski, The New Yorker abides—feeding our noisy, chaotic world through a filter of reason and emerging with a cool, level-headed product that isn’t vastly different than it was when the magazine had J.D. Salinger on retainer, offering an elegant, well-appointed safe zone for the even-tempered, contemplative liberal.

Let’s back up a bit, and talk about those doodles, because while they’re very easily overlooked, usually, you won’t miss them in this issue. That’s because they’re not witty visual gags or ecstatic miniature sketches  or deadpan “Killroy was here” wipeouts. They’re sober drawings of everyday people doing everyday stuff while wearing black hoodies: defiant teenagers loitering or posing; an older gentleman hobbling along on a cane; a rotund guy holding a cowboy hat in one hand, the other hand jammed in a pocket;  a scowling, grandmotherly figure holding her right hand in her left wrist; a sophisticated ingénue rocking an oversized designer handbag and serious heels. Granted, no amount of Trayvon Martin symbolism will ever be enough—for reasons that should be clear to anyone who’s paid any amount of attention to this tragedy—but The New Yorker’s pictorial act of solidary is also worth noting, because it’s the first time in memory that the magazine has been willing to run the risk of puncturing its vaunted, manicured safe-zone status, of welcoming a monster into the garden. Everyone’s a potential target, the images seem to say, and the obvious manipulation of perspective—you’re a reader, but on some level The New Yorker places you in the shoes of an indiscriminate, heat-packing neighborhood watcher  prone to interpreting the donning of a hood with lethal suspicion—is silently devastating in a way a thousand op-ed pieces could never hope to be.