Every really bad candidate has moments when you want to look away. They're worth a look. 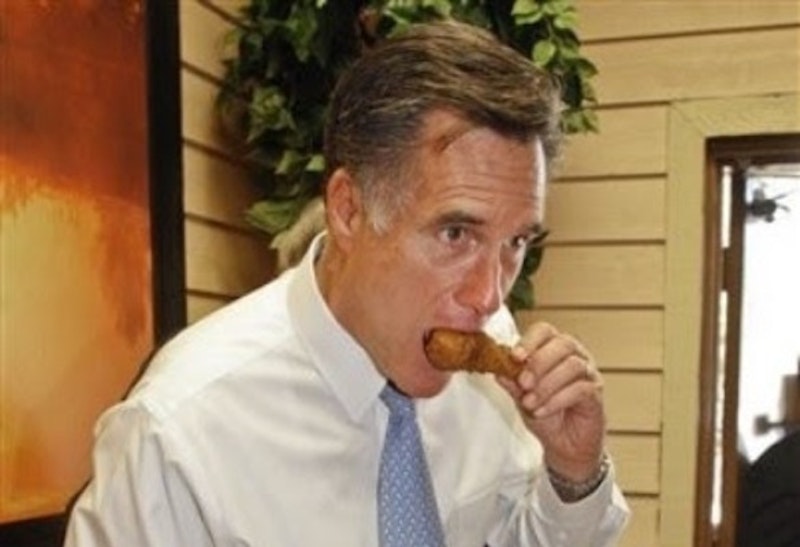 The idea is that campaigns prove something. The person comes out; clips add up until you see him or her. In Mitt Romney’s case, I suggest these clips for the past 10 months: “I’m speaking! I’m speaking!” and the moment his eyes pleaded with the moderator during the second South Carolina debate. He’s now going to be the Republican nominee for president, and some part of the target shot at by Democrats should include those two moments. They’re painful but they’re him, and there’s no use living a lie. Mitt Romney is not wired up well.

Like Jimmy Carter and Michael Dukakis, he has tight self-control and a case of stumble feet. Errors bunch up around him. In business he did fine, but self-presentation there is simple; you just need the numbers and a really good haircut. Now he’s in politics and chaos flies at him from his peripheral vision. These are the moments (“I’m speaking! I’m speaking!”) when it’s kindest to see him as a man afflicted by invisible bats.

Candidates of this sort are painful. When Dukakis faced a hostile TV interviewer, you saw him sag into himself and roll into a ball. He just hung there until the hour and a half was done. You saw the man give way. Romney is painful too. The exact pain he inflicts is this: suspense as to whether the underpants will poke out, whether his chin will come loose and jitter around. Can he keep up his pretense that he’s normal and perfectly all right when actually he’s terrified?

To give him credit, I don’t think Romney was ever scared of Newt Gingrich or Ricky Perry or anybody else up on the stage. But he’s terrified of existing outside the social rules. During the South Carolina debate, his eyes were begging the moderator because somehow Romney had pegged himself between questions (it involved talking a great deal) and now he was in limbo. This agonized him; his hands began to flap. “Now you asked me a entirely different question,” he said. “What do you—what’s—” Watch him and it’s 15 seconds of collapse. He’s helpless and he’s scared, and it’s just because, socially, he doesn’t know where to put his feet.

Of course, when I say Romney cannot exist outside the social rules, we have to remember that his includes this addition from the executive world: namely, that Romney decides when other people talk and what they talk about. For Romney life doesn’t make sense or feel good once this rule is gone. On a debate stage he feels psychically staved in and off-kilter. Unexpected words flap at his head, and to fight back he has to do things that make no sense to him: joke, bluster and chest bump. He feels like an idiot, and he’s terrified that at any moment the pretense will be blown. That fear is, to be poetic, his underwear, and it rarely stays out of sight.

Beaten by Mitt Romney. It’s like getting flopped into submission by a crash-test dummy, one that’s bigger than you because it has more money. The dummy’s flopping takes the form of a brute reflex, the creation of negative TV ads. And that turns out to be enough. That’s what you lose to.

No doubt Rick Santorum is very angry and very happy. His family’s health issues aside, he’d been beaten up by Romney’s ads and lost every primary held in the north, notably Michigan, Wisconsin, and Ohio. Now Pennsylvania was coming along, his home state; he got out before he lost and looked like an idiot. When Santorum quit, he wasn’t just a man with a delegate count against him. His political prospects had been bloodied up and he couldn’t take any more damage.

But a year ago he had no prospects at all, and during the fight he got to be the champion, the David. Wingnuts, Christian or secular, seem to believe that everybody else is phasing themselves out as full-fledged individual humans. Now here Santorum lives an epic 10-month drama along those lines, one with him as hero. He’s got to like that.

Looking back, he knows this—he never lost as a man. The only thing that could beat him was this deadweight from above, this mass of money and influence bunched behind a zombie representative of the devolving majority. Santorum grimaces and gives his head a twist, then gets back on target. He never lost as a man. His fists clench and he thinks about 2016.