Money Doesn’t Change Everything: The Impact of “Citizens United” is Exaggerated

The amount of spending, by both major parties, in the 2012 elections will set a record. So what? 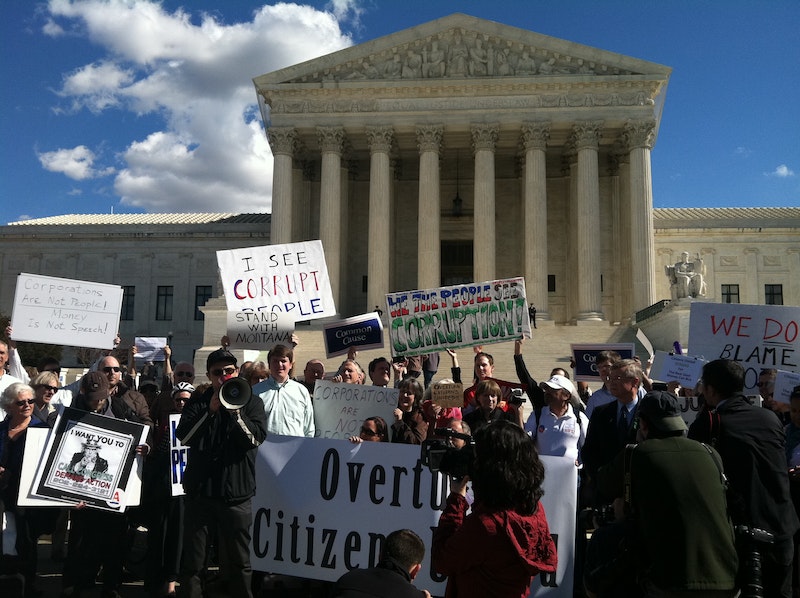 What I find most irritating during this quite peculiar presidential election cycle is the omnipresent griping and gnashing of teeth—almost exclusively the media’s hobbyhorse—over the 2010 Supreme Court “Citizens United” ruling, which lifted some restrictions on the financing of political campaigns. Yes, the notion that corporations are “people” is a bit weird, but that’s a semantic quibble. Liberal and “good-government” groups have wailed that American democracy has been hijacked by the Roberts Court, the result of which Thomas Frank, in a fairly hysterical article in the April Harper’s [subscriber firewall] says, “[W]e are becoming more and more a rich man’s country.”

I can’t say for certain when exactly the United States wasn’t led by the wealthy—certainly not in my lifetime—but the real question is this: absent the loosened campaign finance rules, in which Super PACs have been responsible for huge advertising expenditures, would this election look any different? I doubt it. First, regardless of President Obama’s lackluster first term (a centrist point of view), there was no question a year ago, and currently, that as an incumbent he was favored to win reelection. Has the influx of gobs of cash changed the mediocre field of Republican candidates? Of course not: as conservative commentators have noted, the GOP’s “bench” was thin to begin with, and when men such as Mitch Daniels, Chris Christie, Jeb Bush, John Thune and Paul Ryan all decided, for varying reasons, not to run, the party was left with the likes of Romney, Gingrich, Santorum and all the other comets who had a week or two of poll-infused momentum and are now footnotes. (Does anyone really remember much about Herman Cain?)

Say Daniels, the highly popular Indiana governor, said yes to the pleas of influential GOP leaders and competed in the primaries. Is there any doubt that he too, would’ve benefitted from the largesse of men like Sheldon Adelson (Gingrich) Foster Friess (Santorum), or the battalion of moguls backing Romney? And if Daniels were engaged in a tight race with Romney, he (and his benefactors) would carry out the same scorched-earth advertising blitz before a key primary. It wasn’t for a lack of potential funds that kept potential candidates out of the campaign; as always, it was a combination of personal reasons (Daniels), lack of enthusiasm or experience (Thune and Christie, respectively) or an unfortunate last name (Jeb Bush).

Let’s go back four and eight years and consider whether the “Citizens United” decision would’ve altered the field of candidates in both parties. I’m convinced the electorate would’ve wound up with roughly the same scorecard: in ’08, Obama and Hillary Clinton were running anyway, and loaded with money, as was the now invisible (at least in the Democratic Party) John Edwards. As for the Republicans, Romney was set, as was John McCain, and for those who believe that Mike Huckabee would’ve been aced out by Big Money, let’s remember that his relative success is mirrored this year by Santorum, who initially was given as much a chance as the vanity candidate Michele Bachmann. Santorum won Iowa (as did Huckabee) on a shoestring budget and the money followed.

Similarly, who really believes that either John Kerry or Edwards would’ve decided not to run against President Bush in ’04 had “Citizens United” been law? Kerry had no trouble raising money and, in fact, inexplicably ended the general election contest with a surplus. As for Howard Dean, the “surprise” that year, he (with the help of the media’s out-of-context reporting) self-destructed after losing the Iowa caucuses. Had he kept his exuberance in check, it’s likely he’d have soldiered on, and would’ve been funded, under today’s rules, by a liberal billionaire. But ultimately, the influx of money wasn’t a factor in any of those elections. There’s the bitter complaint from Democrats about the Swift Boat ads in ’04 that questioned Kerry’s Vietnam military service, but less diehard supporters of the Massachusetts senator have acknowledged that it was the candidate’s own fault for not immediately challenging those ads with his own.

Frank opens his essay with an anecdote about Missouri. He writes:

While visiting Kansas City last December I read a local newspaper story lamenting the gradual transformation of Missouri into a reliably Republican citadel—a red state, as we like to say… I assumed the article would go on to mourn the death of judicious public reason—the tradition of giving rival arguments a hearing and testing them with the famous “Show Me” skepticism. I was wrong. Forget the death of open-mindedness. What was actually being mourned that day in the Kansas City Star was a possible loss of advertising revenue by the state’s TV stations… This was the concern, not some airy nonsense about ideology or polarization.

My reaction upon reading Frank’s earnest words was twofold: first, it’s reassuring that the Kansas City Star, at least for the time being, still exists. Second, why wouldn’t a local newspaper focus on the lack of revenue denied Missouri because it’s no longer the “battleground” state it once was? Better that all the money spent by Super PACs help Missouri’s economy—as in jobs, Mr. Frank—a sentiment that’s echoed by other states that aren’t contested, such as Maryland, New York and Texas (which, in the fall will undoubtedly be the usual gimmes for Obama—NY and MD—and Romney (TX). In addition, like all Americans, Missourians certainly aren’t deprived of the endless political analysis, shallow reporting and punditry about the election, via the Internet. I suspect that readers of the Star aren’t looking for a syndicated political columnist, but rather local news.

The sub-hed for Frank’s Harper’s article is “How Billionaire Backers Pick America’s Candidates,” but, as outlined above, that’s nonsense. Frank takes pains to point out that Obama is no saint in the money-raising business, noting that campaign manager Jim Messina has told potential Wall Street backers that the President won’t slam the finance industry during his campaign. Frank concludes: “In other words, to avoid the fate of William Jennings Bryan, the president is apparently prepared to jettison a large chunk of his party’s legislative and rhetorical tradition.” Obviously, Bryan was never elected president, and does Frank believe that Bill Clinton, who declared the era of “big government” was over didn’t “jettison” the traditions of the Democratic Party?

I think part of the left wing’s consternation over “Citizens United” is found in a tucked-away paragraph in Frank’s essay. “[T]he nation’s number one progressive billionaire, George Soros, is reportedly not jazzed about the presidential campaign. He is having trouble distinguishing between Barack Obama and Mitt Romney…”