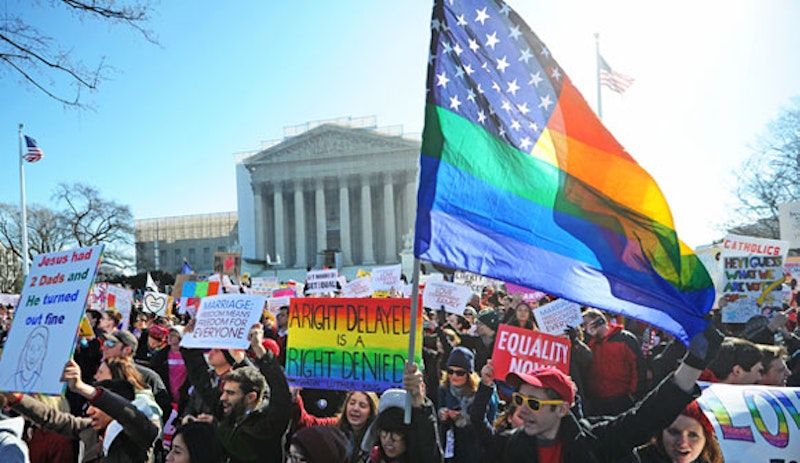 Are you better or worse off since June 26, 2015, when the U.S. Supreme Court delivered their landmark opinion in Obergefell v. Hodges? The Court held that the right to marry is guaranteed to same-sex couples by the Due Process and Equal Protection Clauses of the Fourteenth Amendment to the Constitution. In a 5-4 vote, the Court applied this protection to all Americans, in effect speeding up the work that had already been happening in individual states. It was a contentious decision in the Court and the debate continues in communities around the country and especially on social media.

In thinking about how the June SCOTUS opinion on gay marriage affects me, I came to an important conclusion, and one that I hope all those arguing against same-sex marriage in the country will consider. Bottom line: it doesn’t.

That’s right. The Supreme Court decision doesn’t specifically affect my life. The truth is that, as a white heterosexual woman, my actions are not impacted by the ruling. And this is not a theoretical problem for me to consider. I’m getting married next July and no one will bat an eyelash. When my fiancé and I get our marriage license, we won’t worry about whether the clerk will refuse to serve us. When we travel, we won’t wonder whether our marriage will be recognized from place to place. Like most heterosexual couples, the focus of marriage is more on the wedding, ceremony and traditions. Instead of having to consider whether my desire to be married could result in legal issues, I’m flipping through bridal magazines looking for the perfect dress.

So why do I care? There are two compelling reasons. First, I’m friends with several couples who are same-sex and whose lives have been directly impacted both by the absence of marriage equality and by the new laws and court rulings that have made it possible for them to express their love in a way that most heterosexual couples have taken for granted. I’ve watched as these couples have considered whether to get married in a state where same-sex marriage is legal, or to wait until their home state—the state where they live, work, pay taxes, and participate in their community—approves of their decision to make a commitment to one another based on love. I’ve seen the disappointment and the frustration that these couples experience in not having the same options and opportunities given their friends and neighbors.

The second reason is that I’m an American. I believe in every citizen’s right to life, liberty and the pursuit of happiness, a tenet that was eloquently stated by Thomas Jefferson and the Second Continental Congress in adopting the Declaration of Independence on July 4, 1776. From that moment forward, our government has been engaged in a perpetual battle to define and regulate those “self-evident” truths and “inalienable” rights. From the definition of personhood, slavery and civil rights to voting rights and equal protection of the law regardless of sex or race, factions looking to limit the basic rights of American citizens have always existed and met with resistance and legal remedy that include landmark laws like the Fourteenth Amendment of the Constitution, which was ratified in 1868, the Civil Rights Act of 1964, and the Voting Act of 1965. These laws, and others, were the continuation of the struggle to achieve true equality under the law for all American citizens.

This struggle has existed in part because the Founding Fathers’ notion of equality for all was incomplete. What they meant was equality for all white, property-owning men. As the definition of a “person” expanded to include people of color and women, the definition of marriage also changed. The custom of marriage is very old has been narrowly focused, denying the right to marry to people of different cultures and colors, and even denying women equal rights of economy and property-ownership within their marriages. It’s taken a combined effort of legislative action, court rulings and even Constitutional amendment in order to achieve every increasing levels of equality of marriage and within marriage.

In 1967, the Supreme Court issued its decision in the matter of Loving v. Virginia (368 U.S. 1), which invalidated state laws prohibiting interracial marriage. In writing the Court’s unanimous decision, Chief Justice Earl Warren referred to marriage as “one of the ‘basic civil rights of man’ fundamental to our very existence and survival.” Based on that understanding, the Court invoked the Equal Protection and Due Process Clauses of the Fourteenth Amendment to ensure that American citizens would no longer be denied marriage equality on the basis of race. Not surprisingly, the Supreme Court in Obergefell cited the rationale used in Loving, noting that the same arguments apply to same-sex couples in 2015 that applied to interracial couples in 1967.

But why does it have to be marriage? Why can’t same-sex couples just have a “civil union”? After all, the institution of marriage is rooted in religion and a civil union gives a couple all the same legal benefits as marriage, right? This argument has circulated extensively in the marriage equality debate. But the argument is just another version of a doctrine once held to be fair in this country—separate but equal. In post-Civil War America, a push to end segregation resulted in the separate but equal doctrine, which allowed segregation as long as equal provisions were made for people of color. In 1896, the Supreme Court codified this policy in Plessy v. Ferguson and it wasn’t until Brown v. Board of Education in 1954 that our country acknowledged the truth—separate is not equal. This truth also applies to marriage. Marriage and civil union are not equal and expecting people to settle for civil union is not equal protection under the law.

In our communities, we feel the results of these expanded freedoms in subtle but crucial ways. We experience a collective increase in acceptance and tolerance. True, there’s resistance. Take a look in the business section at any bookstore and you’ll see change management is a hot topic. Change isn’t always comfortable. Embracing the unknown can be scary and difficult. But in the end, change is a necessary part of life. It propels us forward, allowing for progress and growth.

Next July, I’ll marry my best friend. He’s seen me through some of the hardest and happiest times of my life. I’m lucky to live in a country where I can choose to bind my life, emotionally and in every legal sense, to a person who I love and trust, whoever that person may be. When we get married, we’ll be doing it in an America that’s another step closer to providing the kind of freedom and equality to its citizens that we have celebrated for over 200 years.