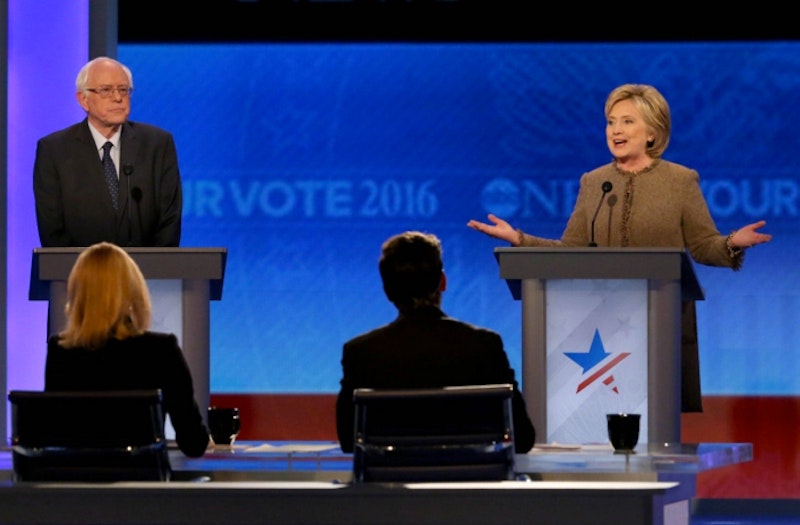 Bernie Sanders was reduced to apologizing for his staff’s electronic breach of Hillary Clinton campaign data at the start of Saturday’s Democratic debate. It’s tough to turn that into a last-minute primary surge for Hillary Clinton’s only serious rival for the Democratic nomination—arguably her only serious rival for the presidency in either party.

She leads comfortably among Democrats in nearly every state in recent polls, some by vast margins. Perhaps Sanders’ best shot at turning the attention to his team’s cyber-shenanigans into a plus would be to argue that if Clinton can’t protect her data from him, surely she’s not a good judge of whether her State Department e-mails were accessed by foreign terrorists. Ha!

But no, seriously, it’s over, and the one bright spot for Sanders in current polls—his approximate tie with Clinton in the pivotal early state of New Hampshire—likely has nothing to do with that state loving mavericks and “outsiders.” It’s just the boring, old-fashioned, pre-Internet phenomenon of the home court advantage. Sanders is from neighboring Vermont, and that may be where he’ll retire when his Senate career is over, sometime during Clinton’s presidency.

There is some justice in seeing Sanders bogging down in campaign procedure, electronic voter data, and scuffles with the party apparatchiks. He’s the one who loves this whole “democracy” thing, after all, and in effect wants our lives politicized and voted upon down to the nth detail. He’s a social democrat, he proudly tells us. But Hillary, by contrast, is a self-proclaimed Progressive—loving rule by technocratic, centralized governmental/corporate elites. So it’s also fitting she strong-arm the idealistic old man.

Sanders’ best hope might be to convince voters that the general election is going to be one of broad, old-timey philosophical principles—in the case of a Trump GOP nomination, full-on fascism vs. a last-ditch defense of the Red Diaper ideals of Sanders’ Brooklyn 1940s youth and his Chicago young adulthood as a member of the Young People’s Socialist League, haunted by his immigrant family’s awareness of Hitler’s rise to political dominance.

Democrats, especially those high-turn-out elderly voters, love to re-fight past battles in which the left held the (apparent or actual) moral high ground. Perhaps he needs to go full nostalgia on this one, persuade people that Hillary may well be the future, but the future is lame and corporate. Fight one more round of epic 20th-century-style ideological fisticuffs at Bernie’s side—against Hitler, against the tycoons, against the Kaiser, against the cops of the 1960s!

Or hope Bernie is re-fighting those old battles in his mind as he’s quietly wheeled away into retirement and Hillary sits down with CEOs and generals to decide our fates.