Sustaining a coalition of the weird. 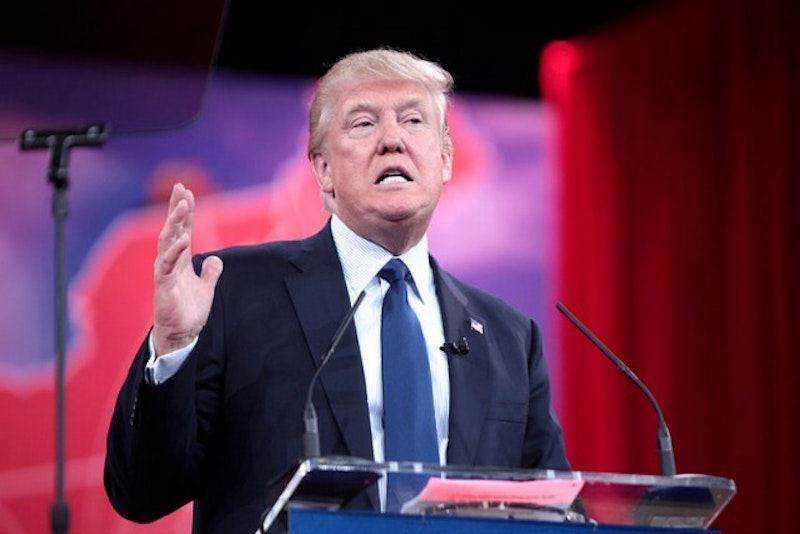 No matter what happens in the election campaigns next year, I think it’s worth remembering just how many Americans, of all factions, were united in horror at Donald Trump’s rise. He’s not just Democrats’ nightmare-version of what “the right” is, nor just an ideological non-sequitur who most longtime Republicans didn’t really see coming and desperately want to be rid of. He’s also a lot like Devo’s vision of what an authoritarian right-winger is.

I mean, 65-year-old or so, irony-loving, quasi-anarchist types of a postmodernist bent, like Devo singer Mark Mothersbaugh or, say, David Byrne, must on some level be loving the whole Trump thing, as if it’s the fulfillment of all their (otherwise rather dated) 1980s prophecies about the way in which America would bottom out if its course were not corrected.

Trump’s not spouting a hardcore version of traditionalist Edmund Burke or an extremist interpretation of economist Ludwig von Mises, after all. He’s a real-life version of that crazy, plastic guy who showed up in so many punk and New Wave videos, threatening to turn the world into a giant shopping mall while smiling insincerely and threatening to arrest everyone at the same time. He’s not so much a logical successor to William F. Buckley or the Bushes (whom he despises) or, certainly, Ron Paul and his libertarian ilk as he is to Joe Isuzu or the Omni Consumer Products executives from the RoboCop movies.

I still can’t believe this is happening, in short. I admit that. I thought we were inoculated long ago.

All this also makes me realize just how much I have in common with the Mothersbaughs (not just the Limbaughs) and Byrnes, not to mention other angry absurdist types of the late-20th century who were anarchists at heart regardless of how they voted and whether they literally called themselves anarchists, such as Jello Biafra or Hunter S. Thompson (who is no longer with us but whom you can now watch on YouTube, living forever as he sets his Christmas tree on fire).

In the 20th century, a sense of the absurd was a somewhat rarified, subversive yet elite thing. Now it’s just what you experience by being awake with your eyes open each day. It’s taken for granted. And it turns out it doesn’t stop anything. It may just help people become more easily acclimated to the ongoing insanity: Hey, this is kind of like Blade Runner! This is kind of like Max Headroom! I just saw the headline “Cerberus Buys 80% of Avon’s North American Business”—you think it’s the actual demon-dog?! Hah, it sounds like a Pynchon thing!

It’s important to retain a certain brotherhood of people who know things are deeply wrong, but maybe we’re just on the verge of finding out people can be unanimous on that point yet remain cogs nonetheless. Even Salvador Dali grew fairly comfortable with Spanish fascism, to the dismay of his left-wing surrealist colleagues. Even though they were goddam commies, I sort of know how they feel lately.