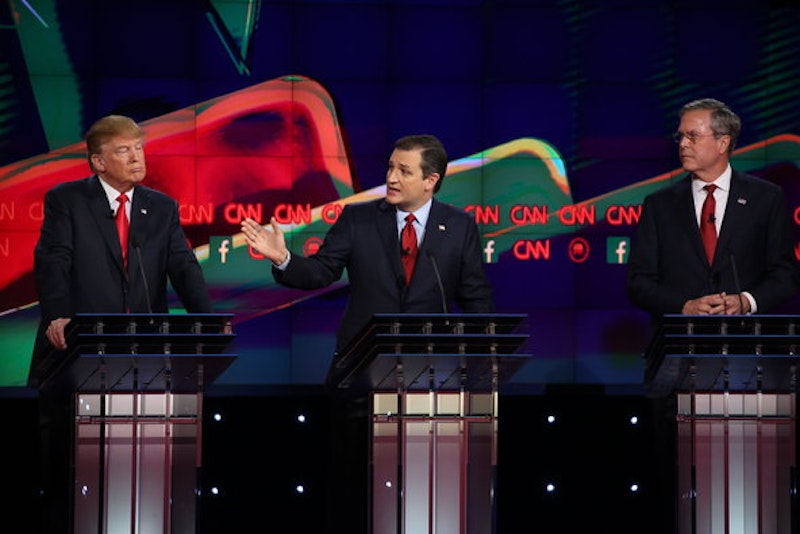 If Donald Trump actually wins the GOP nomination, which I’m hoping will not happen, I suppose the consolation will be watching him occasionally say something shocking precisely because it is an unspeakable truth, not just b.s. In that sense, he has something akin to the pluses and minuses of Tourette’s Syndrome.

How could you not love him going partially-Truther on Bush during last night’s debate with that point about the Bush family coddling Saudi Arabians with terror ties, for instance? Sounds nutty, but it’s basically true—and important, given the pervasive Saudi influence in our politics. Trump is both emperor and boy at the same time. Still, those roles are burden enough without making him president as well.

What does that leave us with?

Jeb Bush, Chris Christie, and Carly Fiorina all attempted variations on the so-weary-with-all-this-talk posture during the debate. On some level, that too is probably true. They sound tired, and they all deserve to rest by ending their campaigns.

Still, we need someone to stay in the race to beat angry authoritarian John Kasich, so we don’t end up with a president who says anti-tech, anti-freedom things like, “We have to solve the encryption problem... Encryption is a major problem.”

Marco Rubio is on much the same page, with added nonsense about purportedly massive budget cuts to the army, navy, and air force that we must reverse. I can’t be the only one who’s noticed he often sounds like a cold-blooded psychopath. Still, the ladies like him, and he’d probably do well in the general election, as befits a psychopath.

At least Ted Cruz, perhaps our only remaining Republican hope of stopping Trump, slams NSA and military overreach, emphasizing the government’s obligation to leave most Americans alone and “focus on the bad guys.” Focused lunacy is better than indiscriminate lunacy.

Of course, in a sane world, I think the guy at the top of the Republican heap would be Rand Paul, the one person up there who dares to say the government is already doing plenty and we’re worse off for it. “I think that by arming the allies of ISIS… [we] made that space bigger that permitted ISIS to grow,” Paul said, adding, “I think those who wanted regime change have made a mistake” in Libya and other now-destabilized nations.