Tables Are Turned on Dana Milbank 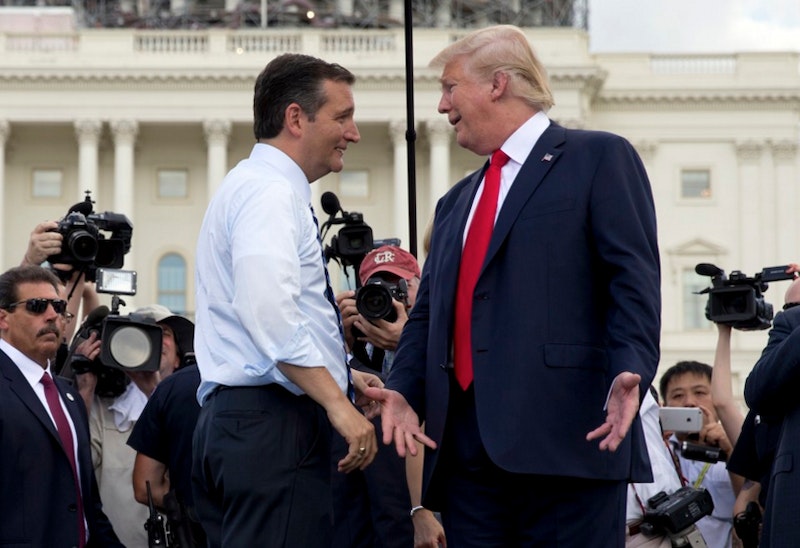 Pin down a close reader of political punditry in 2015 and he or she would, in an instant, identify an op-ed columnist who’s gotten almost everything wrong about next year’s election. It’s a coals-to-Newcastle exercise, but not a bad expenditure of two minutes. Obviously, this is a Trump-dump, and my two bits says the biggest doofus in an Texan-sized pool of, paraphrasing Spiro Agnew’s late speechwriter William Safire—The New York Times, by the way, has never adequately replaced Safire for its conservative op-ed slot, and he’s sorely missed—“nattering nabobs” is The Washington Post’s Dana Milbank.

You may not recall—and no blame assigned here—that Milbank wrote back in May:“Donald Trump announced over the weekend that he would make an announcement in June and that ‘the announcement is going to surprise a lot of people.’ Surprise is unlikely, though, because it assumes people care what Trump has to say.” Gong!

Just over two months ago, as Trump remained in the race—to almost everyone’s surprise, including mine—Milbank amped down the levity, but still promised to eat the page his column was printed was on if Trump became the GOP candidate. He gave his word to however many people read his slight Post “sketches” that Trump would fail. Why? He wrote: “[My] prediction that Trump will ultimately fail isn’t about punditry or polling. It comes from the faith that American voters are more sensible than many poll-obsessed journalists and commentators give them credit for. Trump won’t prevail in the Republican primary because voters, in the end, tend to get it right.”

Apparently not, as Trump still rides atop most polls—though the question of whether he can translate that alleged support into actual votes in Iowa, New Hampshire and South Carolina is legitimate—and Milbank’s shifted from the pious high ground of his belief in the American people to denouncing those ingrates who failed to heed his words and are still backing the speaks-without-thinking celebrity. Milbank’s column last Friday didn’t contain a lick of what he considers humor, but rather concentrated on all the really mean insults hurled at him after he wrote in an earlier article, “Let’s not mince words. Donald Trump is a racist and bigot.”

I’ve no quarrel with that tardy proclamation, but Milbank’s reaction was thin-skinned, in contrast to the notion (at least in the Beltway crowd) that reporters are tough as toenails. The comments Milbank received via social media and the Post were disgusting: zeroing in on the writer’s Judaism, one imbecile said he was “a kike communist.” Another called his girlfriend a “Gross Jewess.” Yet one more “Trump patriot” called the columnist “Dana FAGGET Milbank.”

Pardon the profanity, but grow the fuck up, Dana! After making such definitive (and what appeared, at the time) and safe statements from atop Mt. Bezos, what did you expect? Journalists of both parties are caught in the Twisted Trump Wave—and if you think Ted Cruz is any better than Trump, pause, and consider that the Texas senator is far more dangerous than his competitor simply because he really believes all Muslims are evil, immigrants ought to be kicked out of the country and abortion/gay marriage is immoral—and no one can really say if the Queens-born entertainer has peaked or will go on to challenge the Clinton Machine next November.

Milbank, naturally, cloaks his column in sanctimony, saying: “I write this not out of any hope of changing the minds of Trump-backers, nor to reinforce the prevailing point of view among liberals that Trump has unleashed ugliness. [My own view is that a lot of Democrats will vote for Trump in the open primaries, and should it get that far, the general election, but won’t admit it.] I write this to conservatives of conscience: Is this what you want conservatism, the Republican Party and America to be?”

No, I don’t. But I’d turn that around and ask “liberals of conscience,” if they want America led by Hillary Clinton, a borderline (that’s generous) corrupt lifetime pol who’ll take her cues from lobbyists and billionaire Hollywood/finance sector donors?