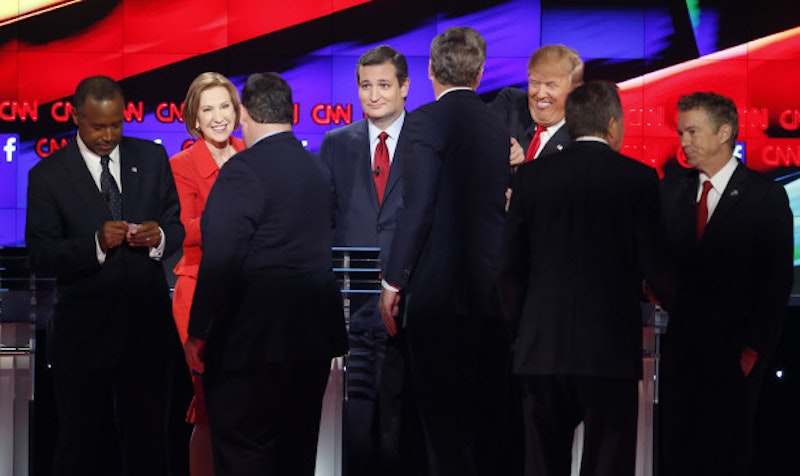 Lotta moments. The debate is like a candy bar where they loaded in the nougat. Peanuts everywhere. Ted Cruz's face while Rubio talks about him. Jeb so pleased with himself at interrupting Trump, and Trump telling him to clam up. Pundits thought the debate might result in some medium-grade sorting out. Donald Trump might swat down Cruz, the bastard now leading him in Iowa. Chris Christie might crown himself the party's King of Keep-us-safe, and in fact he didn't do so badly. Waiting as a question is teed up, he smolders like he's waiting to break the question's head off and stick his tongue down its spine. He has eyes with gravitational pull, and he's scary. But no one came out of the debate as king, and the losers had been losing a while anyway.

The main thing the debate did was show how well advanced the Republicans are in turning politics into spectacle. If you're going to have a presidential debate, you might as well have nine fast talkers and wacky personalities trading dialogue back and forth while bells ring. The moments kept churning up. They used to be the exception—sweat on Nixon's lip was an event—and now the moments crowd underfoot. My favorite this time around: the little tag of a smile pinned to Cruz's face as Trump vouched for his temperament. “He's just fine,” Trump said. “Don't worry about it.” Judy Bash, sounding blank and dubious at the same time, said, “Okay.” Her reaction was understandable, given that Trump had raised the matter of Cruz's temperament by calling him a maniac for his behavior in the Senate. But Trump said that, over the past few days, he had found Cruz to have a “wonderful temperament.” He meant that he had insulted Cruz's Senate career and that Cruz had taken it.Second favorite moment: Hugh Hewitt asking Trump about the nuclear triad. Apparently Trump doesn't know what it is. “I think,” he said, winding up, “I think, for me, nuclear is just the power, the devastation is very important to me.” Third favorite moment: the line they gave Jeb about Trump getting his foreign policy knowledge from “the shows” (which is how Trump put it when asked where he learned foreign policy stuff). “I don't know if that's Saturday morning or Sunday morning,” Jeb said. The Republican establishment still hires people who are good at putting words together. Another good one they gave Jeb, also about Trump: “He's a chaos candidate and he'd be a chaos president.” That's getting very close to the nub of this election.

Freedom's angry poodle.  Chris Christie and Rand Paul were pissed at each other, as in previous debates, and again Paul lurched at Christie with a weak, last-second gut punch. Back in the first debate he tried Christie's alliance with President Obama during Sandy. This time he went for Bridgegate. Then and now his voice went thin and high, like he hadn't quite bargained on the sentence and was waiting for the moment when he could stop saying it.

As The Washington Post transcribes Paul's Bridgegate remarks: “I mean, I think when we think about the judgment of someone who might want World War III, we might think about someone who might shut down a bridge because they don't like their friends; they don't want to—you know, they want to [inaudible] a Democrat.” World War III and “they don't like their friends.” That's a lot for one sentence to process. He means Christie is a vindictive dick who's the sort to stir global degrees of shit. But Paul, that hooting articulate man, found his voice flying apart during his attempted grand scoff. That's how it is with Christie and Paul. Look at them side by side, which is how the debate stagers tend to place them, and the big one looks ready to roll up the curly-haired one. Christie has the drop on Paul, and the low guy yips loud to make up for it.

Stranded Kasich Syndrome. He talks. He doesn't want to keep talking but he does. You can't lead if you aren't there, and at a debate you're only there if you talk. So, if your moment comes, you start talking and you don't let up. Amass those seconds. Ignore the moderator, the bell. Don't give in. Each second is a second of you being a leader, and everyone can see you being a leader. Keep talking.

Cruz and Carly Fiorina are fine with that logic. Kasich appears to suffer. But he holds on. “And the world wants us to be able to function from strength, believe it or not,” he says, well along into his aria. “Get our economy going, get these people together in a room. We can fix this, ladies and gentlemen.” Hewitt breaks in, mowing him down. Their voices battle. “We don't have to fight all the time,” Kasich says. “It can be done, and we will be great...”

Hewitt is implacable. “Governor,” he says. “Thank you, Governor.”

“When we join together,” Kasich says, and he adds, “Thank you, Hugh.”

Kasich launched his aria by playing “look at the insiders fight,” pointing a finger at Jeb and Trump as they went at it. Christie pulled that in the second debate, and again in this one (with Rand Paul and Marco Rubio), and Fiorina was trying her best to pull the move herself as Kasich went for it. “This doesn't do a thing to solve the problems,” Fiorina announced into the din. “One at a time,” Wolf Blitzer said, and Kasich was allowed to go ahead. “It sounds more and more what my daughter said that I said in the beginning, all the fighting and arguing is not advancing us,” Kasich began. (“It will not solve the problem,” Fiorina said, but she was sounding jazz notes, not trying to break in.)

Conceivably Kasich might have had a lot to say. According to his ads, the Governor considers his party's presidential front-runner to be kind of a fascist menace to America's freedom. But he didn't have a lot to say, he just spoke, and he sounded like he didn't want to. “Guess what? Both in Congress in balancing the budget and in Ohio fixing the economy,” Kasich said, and he was wobbling his way toward “Thank you, Hugh.”

Kasich believes in some decent-sounding principles. He doesn't seem like somebody who could make those principles happen. That may be unfair, given that his career (by Republican standards) is distinguished. But the magic of the debates casts every participant in a role. Kasich is a vice president. In fact, he's the well-meaning vice president who gets offed and gives the president a reason to kill the aliens or the terrorist mastermind.