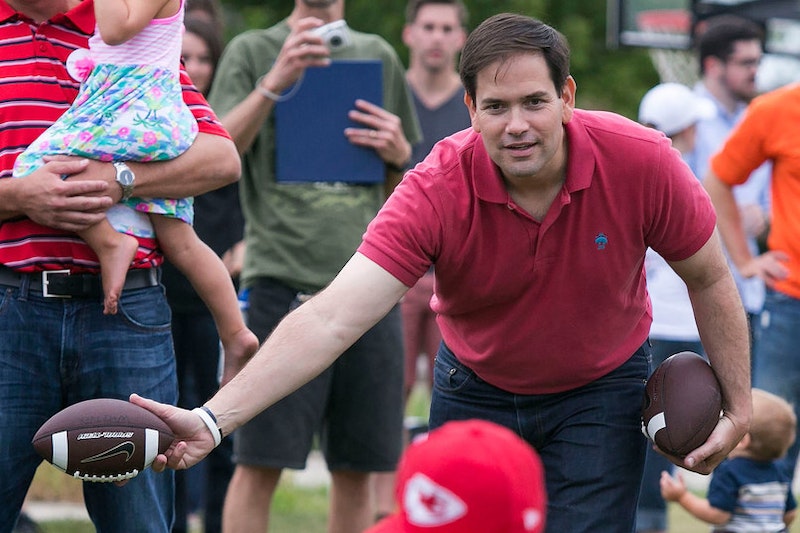 “The time a line of people waited for him after an event, while his field staffers ate pizza backstage; the appearance he canceled at a major evangelical gathering for no apparent reason; the Saturday he spent here recently watching football with his state chairman, Jack Whitver, rather than holding public events.” There you have Sen. Marco Rubio in Iowa. National Review piles up examples of the Senator and his team “missing easy opportunities to connect with voters,” which is journalese for acting like a gang of jagoffs. “It doesn't seem like he really wants to win Iowa,” says the editor of The Iowa Republican. When Marco stops by the state, he barely goes anywhere: “Republicans have taken to joking that he is running for mayor of Ankeny, the Des Moines suburb where his state headquarters is located.”

The headline is “Rubio's Weak Ground Game Angers Iowa Republicans.” They want him to win, but he's booting it. Guy can't be bothered, that's all. Pizza backstage, football. His team says they have a special plan: forget campaigning and a ground game, go with ads and media. “More people in Iowa see Marco on Fox and Friends than see Marco when he is in Iowa,” says the senator's campaign manager. He doesn't explain who will get the TV viewers to leave their couch and drive to a church basement on a slushy night in February. As presented by National Review, Rubio's plan seems narcissistic: winning votes is the same as winning fans. Apparently the boy shines so bright that heads will turn like crazy; the turned heads will then drag bodies to a caucus or a voting booth.The credit card, the missed votes. Now here he is, lounging about in Des Moines. He knows the camera loves him, and the folks, they can wait. Spoiled Marco. I don't know if it's true, but this is the story Republicans tell about him.

New Hampshire. As usual with a good story, there's something that doesn't match up. A week before the National Review piece, one of Rubio's people in New Hampshire talked with The Boston Globe. This fellow didn't bother with talk of a new-style campaign. He took the line that Rubio's ground game was blazing. “Rubio's campaign said its voter-outreach program is top-notch,” reports the Globe article. “A campaign aide said volunteers knocked on 4,000 doors in the state last weekend and supporters are present at most local Republican gatherings, plus events such as the holiday parade in Salem.”

The Globe is dubious. The paper found just seven paid Rubio staffers in New Hampshire, while Donald Trump has 15, Ben Carson has 10 and Jeb Bush has 20 (and he's been cutting like crazy elsewhere, according to the press). Chris Christie says he has 100 endorsements from important people in New Hampshire. Rubio, by contrast, “has not collected many high-profile endorsements,” as the Globe delicately puts it. Ben Carson has been to New Hampshire fewer times than Rubio, but that's true of nobody else in the main-stage debates.

When Rubio does visit the state, he keeps things short. “Most of his recent visits include a single town hall meeting and another event, such as a business tour or a speech to the local Chamber of Commerce,” the paper says. The article covers a town hall meeting. Rubio stays for 43 minutes (speech, questions, handshaking), then shimmers away to do an interview with Fox. He had kept the crowd waiting 65 minutes, “but more than 200 people stayed the entire time to hear him speak.”

Rubio is second in the polls for the state. The Real Clear Politics average has Trump at 29 percent and Rubio at 12 percent, which admittedly is quite a difference. But Jeb and his 20 staffers are at seven percent. Marco is a star, for now.