Trump’s a racist who wants to make this into a country of racists. 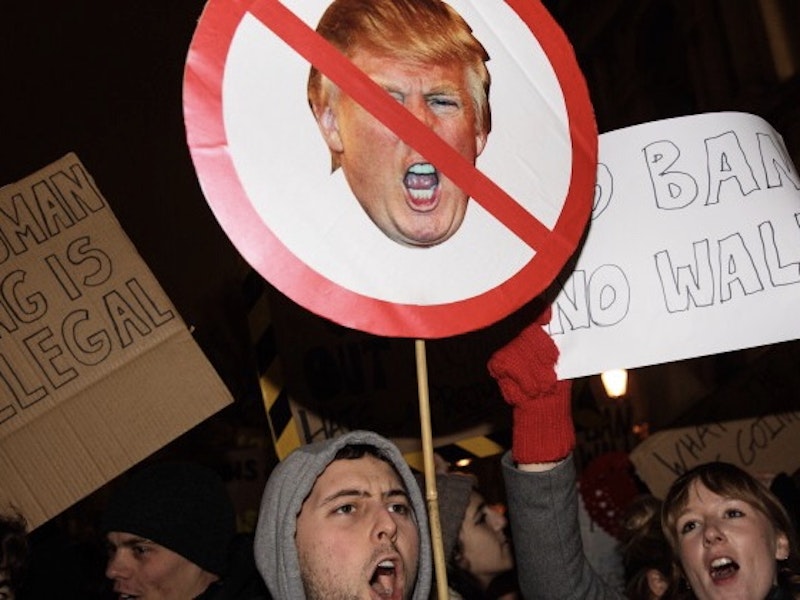 Okay, now I'm pissed off. Though Donald Trump has irritated or exasperated me at times, I've watched the anti-Trump rage with a fair amount of distance and a growing boredom. His every Tweet inflicts trauma on the sort of people who can be traumatized on Twitter, but I often find the nasty cracks amusing or trivial. In 2016, as usual, I professed not to care which side won; I continue to despise them both. I've often voted Libertarian for every office for which a candidate was available, or not voted, or written in the name of someone I respect. Staring at the names Clinton and Trump on my ballot in 2016, I voted for Maya Lin for President of the United States.

But at least for tomorrow's election, Trump has turned me into a Democrat. I'm planning to vote the party line. This feels like political self-betrayal.

I disagree with the entire orientation of the American political left, which answers every problem with a bureaucracy. If the left is becoming explicit in its socialism, I appreciate its frankness, but I disagree with it entirely. I’m in favor of racial, gender, and orientational equality, but the sort of identity politics that the left is running now, where all they see is your skin color and gonadal configuration, and all they want to do is control the words people use or the racial composition of awards shows, makes me nauseous when it doesn't just make me snicker. Also, as I've argued here and there, the whole thing isn't even a useful electoral strategy, much less a decent way seeing the world.

However. Trump's "closing argument," as he tries to retain a Republican Congress, is the "invasion" of the United States by people he characterizes as gang members and terrorists, but who appear to me to be refugees. He’s targeting them, in part, in virtue of their ethnicity, which he’s using in an attempt to stoke the existing prejudices of American voters and create new ones. He's employing the US Army in his demagogic grandstanding, and he's threatening to shoot rock-throwers. So, a lot of what the anti-Trump howlers are howling about this time is right, and I think Trump is a racist who wants to make this into a country of racists, or show that we have never ceased to be that.

I think it’s likely that Republicans will do better than expected tomorrow. If they do, everyone will reasonably conclude that anti-immigrant bigotry, and the not-even-concealed racism of the Ron DeSantis "monkey this up" variety, is how you win elections now. This will get worse in 2020. Then, for the foreseeable future, American will be divided by ethnic and political strife. So I'm finally going to get jammed into the lesser-of-two-evils situation: the most important thing is for the Republicans not do better than expected. The way I can make my infinitesimal voter-type contribution to that is by voting Democratic. Fuck.

It has reached the point at which I wish that Hillary Clinton were president. Not only did I vote for Maya Lin, I helped persuade my partner that she ought to "go with her convictions" and vote for Jill Stein. It wouldn't matter much either way, I claimed, because Hillary was going to carry Pennsylvania pretty easily. In a case like that, it's okay to express yourself. Then Trump won, and she's been grappling with some guilt ever since. But now, when I think of myself as the sort of person who wishes that Hillary Clinton were president, I hate what I’ve become. And now, again like so many, I blame Trump. I've been wrapped up, shipped to a pole, consigned. Trump has made me into something I hate.

Again this time around, my vote appears to be of limited usefulness either way. The State Supreme Court redistricted Pennsylvania this year, because the previous set-up was a ridiculous Republican gerrymander. That had the effect of moving me into the new 13th district, and though the Republican incumbent who used to represent my area is vulnerable in his new district (which now includes downtown Harrisburg), the new 13th is about as red as it gets: if it had existed in 2016, according to The New York Times, Trump would’ve won by 46 points. So my vote for Brent Ottaway, a college professor from Hollidaysburg, will be useless (though I may have been wrong about that before). Meanwhile, the incumbent Governor, Tom Wolf, and Senator, Bob Casey, appear pretty safe. Their opponents are presenting themselves as little Trumps, however, so I’m now eager to vote for the incumbents. As I say that, I hardly recognize myself.

I used to argue that Trump was not exactly a racist, or at any rate that his opponents were making a hash of the concept of race. I think he’s anti-Muslim, for example, as you could perhaps see when he claimed that there are "Middle Easterners" in the refugee caravan. But Islam is not a race. I think he’s anti-Latino, but Latino is not a race either: ask an Afro-Brazilian, for example. But perhaps instead of quibbling about terms I should’ve been more tightly focused on the fact that the President of the United States is brutally stereotyping people and pursuing practical policies to oppress them in virtue of their alleged collective identities.

Even recently, I've made fun of people for holding Trump generally responsible for everything that goes wrong, including terroristic violence. They knowingly stare into the camera and connect Trump to everything bad that happens in virtue of "contributing to the toxic atmosphere," which is just as vague as and a lot less plausible than it sounds. I saw people on CNN holding Trump "directly responsible" for the mass shooting in Pittsburgh in virtue of his alleged anti-Semitism, which strikes me as ridiculous. Ask Benjamin Netanyahu whether Donald Trump is an anti-Semite.

But just because his opponents can't distinguish the plausible from the implausible attacks, or the races from the regions or the religions, or the trivial from the threats, doesn't mean that Trump isn't evil. He's evil this week in virtue of the ways he's trying to wield religious and ethnic divisions to bring out the vote. He's evil to me because he's trapped me in a room with a bunch of socialists.