Diseased and semi-deranged chicken endorses the Texas candidate for Senate. 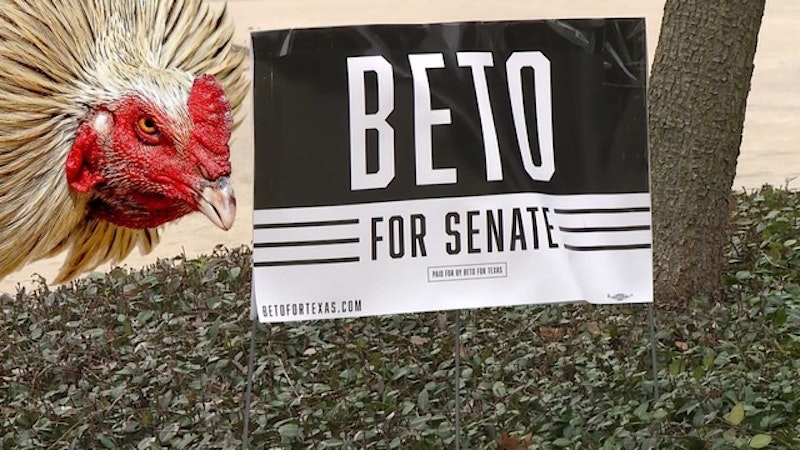 I’m doing my part—are you? Seriously, are you? Are you doing anything to get gay-with-Putin lizard Cheeto-face 45 wack rug demagogue impeached? I’m a #ResistanceBitch! Don’t tread on me or question my identity. Yes, I’m from Massachusetts. Yes, I have a checkered past. Yes, I’m a chicken (just say it… don’t say rooster, it confuses people… just say it). This is a first draft so if this somehow gets out please stop reading immediately. Anyway I know we’re cool now because we have legal weed and the Red Sox just won the World Series for the first time in five years (a record drought), but I’d rather focus my electoral energy in states that need it more.

I’m knocking on doors in Texas. I’m a Beto O’Rourke supporter. I’ve known about him for nearly two decades: my old friend Cedric Bixler-Zavala introduced me to Beto when they were playing in a band together in El Paso. I was a huge fan of At the Drive-In (The Mars Volta, not so much. Too much salsa. I have a very weak tummy), and I kept tabs on Cedric and Beto through the years, but have to admit even I found his rise to national prominence surprising and heartening all the same. I’m knocking on doors for a Democratic candidate in Texas in 2018, so I’ve been assaulted multiple times in the past month: hit, spit on, called names, nearly kidnapped, attempted cookings and raw eatings… nevertheless, I persisted. I’m kind of a hero for it, tbh.

But I must chide my fellow liberals for their continual prevaricating: STOP SHAMING PEOPLE FOR SHAMING OTHER PEOPLE FOR NOT VOTING! “Straight white cis dudes need to stop gloating their privilege and give other people slack for not voting, because it’s not easy!” Um, can you read? Are you registered to vote? Then you can vote… vote early if you have work. Vote absentee if you won’t be in town. Vote straight Democrat town the ticket.

Ugh, that’s another thing I hate about the people I work with (especially Susan, such a wet towel): just tell people to vote for Democrats. Fuck this “both sides” shit. “No matter who you vote for…” um, no! It matters! Vote for Beto! How condescending, too: as if anyone who isn’t straight, white, cis, and male can’t read and therefore can’t vote. This other girl Becky was giving me guff so I spur-clawed her, and now I’m not allowed to be associated with Beto and his brand. But I felt that this needed to be published so that people could see a side of Beto that his campaign hasn’t emphasized yet: that he’s cool. Don’t you want to be cool like Beto?