Sell Our Souls or Save Them Simultaneously

This ain't no rock & roll show. 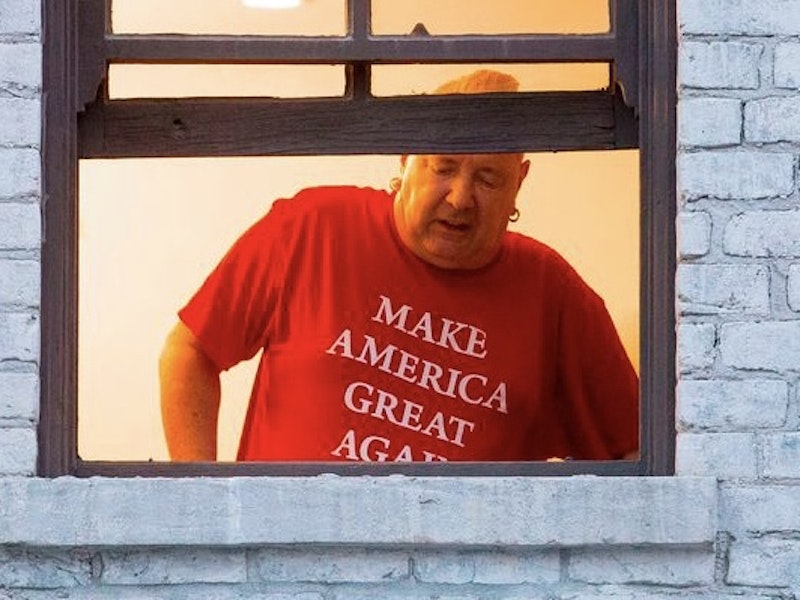 The subtitle "This Ain't No Rock & Roll Show" is from the song "I Need Your Head” by Hasil Adkins on the 1986 album Out To Hunch. An excellent example of the psychobilly mystique that’s the often-misunderstood mountain man persona of Adkins. Hemade a strange hybrid psycho punk sound. His song "She Said" was originally released in 1964 as a 45 rpm on Jody Records with "Is This The End” on the flip side, originally credited to Hasil Adkins and His Happy Guitar.

Re-recorded decades later, and covered by The Cramps, itcemented psychobilly and punk into the haphazard architecture of twisted genre musical history. A one-man band wrecking ball of white noise, jangled nerves, off-key chords and "dying commodity meat." Straight out of the government cheese sanctioned and approved tin can of the Appalachia coal mines. The firmament of the poor and the poorly educated white trash that always made America great.

Seeing a photo several weeks ago of Johnny Rotten hanging out of a hotel window sneaking a cigarette and sporting a red MAGA t-shirt did absolutely nothing for me. He was looking like an old troll at 62. I’m looking like an old fart too. There’s no shock and awe like back in the 1970s when The Sex Pistols first emerged from the muck of the second British Invasion.

An invention of prefabricated ideas about rock ‘n’ roll as rebellion and revolution. The difference is that someone like Hasil Adkins is authentic, whereas Johnny Rotten was contrived intentionally for shock value, hoping for reactions of disgust. Much in the same way as rock ‘n’ roll did in the 1950s. Much in the same way the powers that be use an agenda of fascism and pro wrestling techniques to get their point imbedded in the public psyche. Firmly rooted in racist history, Americans can't handle going it alone, or thinking for themselves. Dubbed "race" music in rock’s infancy by fearful religious white men who were afraid jungle rhythms and marijuana may seduce their wives, sons and daughters. Fear of God is no competition for the fear of independent strong people of color. Or an old blind black man playing the blues.

You'd be hard pressed to equate rock today with the sex and drugs angle of the glory days. Rebel youth have nothing in common with Taylor Swift, Lady Gaga and all the multitudes of pop divas male or female who can’t rock one iota. Two extremes at the opposite ends of the musical spectrum, Johnny Rotten has nothing in common with Kanye West (until last week, when he “distanced” himself from politics), except they both wear MAGA crap. Churning out cookie-cutter stamps of unoriginality. Mixing music with politics and race-baiting to divide and conquer.

Elvis and Michael Jackson are examples of just how far we're willing to go into the rockin’ hole of absurdity. The surrealist Dali hanging out Alice Cooper doesn’t compare. Kurt Cobain with a shotgun is nothing. Jerry Garcia with a monkey on his back. Jimi Hendrix asks us to excuse him while he kisses the sky. Zappa and Beefheart tried to warn us. The Monkees were Hollywood’s answer to the Beatles, in the free love, swinging 1960s. Making way for the anonymous love of the 70s into the safe-sex 80s. Fast muscle cars and dancing girls. Disco cocaine. Pills and booze. Gurus and psychotic serial killers. The psychedelic paraphernalia that made this country great again and over again.

Sell our souls or save them simultaneously with the raw power of rock ‘n’ roll. It’s unnecessary right now for young white guys with long hair, black leather jackets and ripped blue jeans to play electric guitars while the drummer goes crazy in the background. Lawrence Welk covers The Doobie Brothers. It appears out of place to see hippies and punks in their costumes prancing and dancing, digging the same music. It no longer rings true to any cause or protest against injustice or any blind virtue. Rock Against Racism or Farm Aid. Willie Nelson or Ozzy Osbourne. A Black Sabbath mashup with Funkadelics and two of the guys from Kiss in full make-up.

The monsters of rock aren't a scary talent. The unequaled imbalance of our shared musical history is iffy. It doesn't hold water in the leaky boats of dinosaur prog rock stomping around stadiums. The operatic farewell tours of living legends saying goodbye one more time to squeeze a few more dollars from diehard fans. Sold out at Madison Square Garden doesn't seem so big anymore.

The Rolling Stones are officially the oldest, longest running, greatest band ever to make a deal with the devil. They won't even take odds in Reno on the longevity of Mick, Keith or Charlie. Is rock still a commodity? It's a safe bet to say they’ll live forever, if only in the music. It’s all part of the show. Part of the act. The Hard Rock Cafe is a huge franchise and there is a CBGB's theme bar in Vegas. The great rock ‘n’ roll swindle of another parody of a parody made into a cartoon about distorted events in the history of popular music.

A cheesy imitation of a copy from a cover band at Hotel Hell. Karaoke night killed the DJ and video killed the radio star. Do the dance craze. It's the latest fad sweeping the nation. The next big viral YouTube sensation can be you. And why not? The culture is up for grabs and anything goes. If it goes down you heard it here first. Our way of life somehow makes humans more human. Any dummy with a smart phone can be the next big thing. Disneyland on steroids. The show’s about to start… any minute now. We're on live feed in a real time space continuum. These are really good seats. Front row. I hope they come back out for an encore. My phone’s almost dead. I really need to rock out forever.