The national debt is not like a household debt. 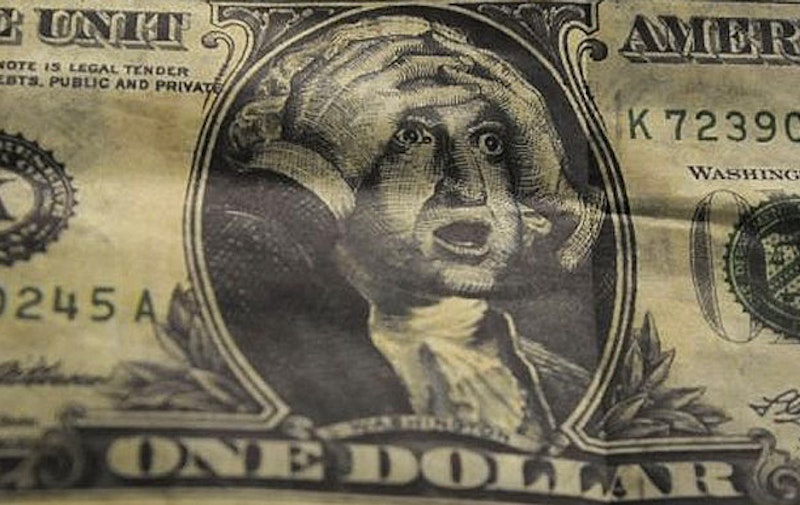 A recent cautionary piece in The Federalist warns, "Nobody Cares About The Federal Debt, But It Cares About Us." It's the same story you've read for years. Armageddon will soon be upon us, and the children will end up paying for everything. The "middle-class welfare state" is to blame for the impending doom, of course.

To be specific: Social Security and Medicare, two programs you might’ve thought helped a lot of people keep living over the years. While staying alive shouldn’t be trivialized, it must be kept in its proper perspective.

The Federalist provides us with that perspective in the form of a graphic that puts the “national debt” figure at $18 trillion and change, and informs us "your family share" is $137,428. Writer Robert Tracinski doesn't explain how he calculated this figure. Time magazine's cover recently informed us every man, woman, and child collectively owes $42,998, due to government profligacy, so my first thought was maybe he just multiplied that figure by the average size of the American family, although that would only bring us to $109,214.92.

Regardless of the science behind the calculation, it's surely a good thing not many young children read The Federalist, as the realization that your family is that deep in the hole would be an awful burden to bear, especially if you knew about your upcoming college debt which, unlike the national debt, is actually a real debt that must be paid back. This is for adults only. Adults like Tracinski know it's the "middle-class welfare state" that's putting us in hock, and not something like the defense budget. After all, the preamble to Constitution expressly states that the government will "provide for the common defense." It doesn't say a word about, say, Medicare, although there is that part about promoting the general welfare, but that's pretty vague. No way of knowing that Governeur Morris was thinking about people being healthy or having something to live on when they're old when he wrote that.

While the Constitution doesn't explicitly state that American defense spending must be roughly equal in size to the next nine national military budgets in the world, I get the feeling that the people at The Federalist, including Tracinski, just know in their gut this is how The Founders wanted it. We have peaceful, militarily unthreatening neighbors to the north and south of us, but you never know. And although it would have been nice if that massive spending could have kept us safe on 9/11, you can't ask for everything.

According to the article, Social Security is going to break down in 19 years. I hope our military doesn't run out of money by that time, because that would put us in a pickle. A bunch of broke old people with no armed forces to defend them would make us a prime target for China. The forthcoming Trump shipwreck might screw the down-ballot Republicans so bad that the Democrats will get strong enough in Congress to stop approving all those Department of Defense spending requests. Everyone knows only Republicans care enough to keep us safe.

In fact, the entire premise of this Federalist article is flawed because it doesn’t reflect the reality of our current economic system. There’s only one way the U.S. government spends money—it changes numbers in bank accounts. If the government wants to put $1000 in your account, it doesn't have to do anything more than type four numerals into a computer screen. The U.S. government is like the scorekeeper at a football game. If your team scores a touchdown, does he have to dip into his point collection and get six of them to post? No. The scorekeeper can't run out of points, like the U.S. government can't run out of dollars.

When Federal Reserve Chairmen Ben Bernanke pumped $600 billion into the banks in 2010, he explicitly explained on 60 Minutes where that money came from. He told Scott Pelley he didn't have to call China or the IRS to get the cash, because the process would involve no more than marking up some numbers in the bank accounts that banks have with the Fed.

If you understand what Bernanke said, then you understand why the argument laid out in this alarmist Federalist article makes no sense. Your family doesn't owe $137,428. The argument is based on the faulty assumption that the part of spending we don't collect in taxes we have to borrow, and that this debt will have to be paid by future generations. Future generations will, as all generations do, consume what they produce. The gold standard is long gone, and the national debt is not like a household debt that must be paid off. It's really just bank deposits at the Fed, and it doesn't "care about us" at all. The Federalist can run this one again verbatim in 10 years with tweaked numbers and it will be equally irrelevant.