Fear Not the Sanders/Trump Voter

They cannot harm you. 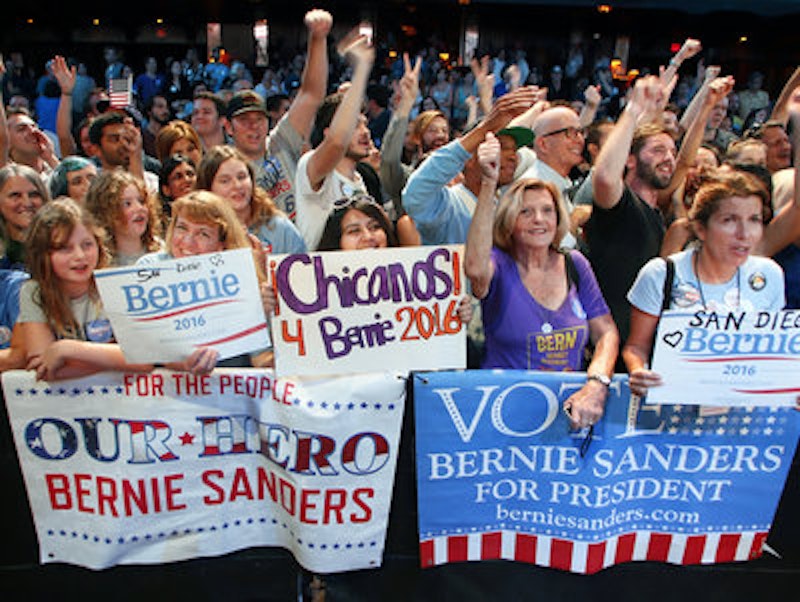 The Democratic Primary is essentially over, but some diehard Bernie Sanders fans remain recalcitrant. They proclaim they’ll never vote for Hillary Clinton because she’s awful. Some even insist they’ll vote for Donald Trump. Since Trump is a racist buffoon and in no way likely to push for left-wing policies, when leftists declare they will vote for Trump, other leftists get pissed off.

It's annoying when people claim that the run-of-the-mill-bad Democrat is exactly the same as the guy who encourages his fans to beat up black people at his rallies. But no matter how loud they shout about it, disaffected Sanders supporters just are not going to swing the election to Trump.

There are always disaffected primary voters who insist they won't vote for the party's nominee. Back in 2008, fully 40 percent of Clinton supporters said they wouldn't vote for Obama in the general election campaign. Currently a quarter of Sanders' supporters say they won't support Clinton—or, in other words, Clinton is doing significantly better with Sanders voters now than Obama was doing with Clinton voters in 2008. Obama went on to win Democratic voters by 89-10 percent. Clinton voter defections were not a substantial problem; it's hard to imagine that the smaller number of disaffected Sanders voters will be one.

The truth is, people aren't necessarily good predictors of how they're going to vote in six months. At the end of a hard fought primary campaign, when all your energy is focused on the evils of that dastardly Clinton, it can be hard to tell a pollster you'll vote for her—especially when you're trying to convince folks on the fence that your own guy is more electable. But in a little while, when the primary is over, and Sanders has been campaigning for Clinton for months, things are likely to look different. Campaigns are designed to remind partisans why they're partisans. Weeks of negative ads about much Trump hates Hispanics, black people and women will inevitably bring many people back into the fold. (And yes, this works on the other side too; many Republican partisans who say they won't vote for Trump now will end up doing so eventually.)

Setting aside the trends, it's worth remembering that individual votes are almost completely inconsequential. One vote isn't going to sway much of anything—especially if you're not in a swing state. I was one of those who voted Nader in 2000 because I was sick of Bill Clinton. Did it matter? Nah. I was in Illinois, which went for Gore, as everyone knew it would. I could vote for Trump this time out if I wanted; that would be gross, but completely inconsequential. The same goes for any Sanders-to-Trump supporter in California, New York, Mississippi, or Texas. Even in swing states, the real question isn't, "Will some Sanders supporters vote for Trump?" The real question is, "Will those Sanders supporters contribute to Trump's campaign? Phone bank for Trump? Go door to door for Trump?" Is Trump really going to substantially inspire and energize some consequential number of Sanders supporters in a way that's likely to fundamentally affect the election? Come on.

So, yes, Sanders/Trump crossover votes are not going to affect anything in particular, and people who insist loudly that they’re going to switch from Sanders to Trump can be safely ignored. It's worth remembering that the best, more infuriating response when they say, "I'm going to vote for Trump," is not "That's a horrible thing to do." It's "I don't believe you."