What Trump Learned from Obama

It's all about branding. 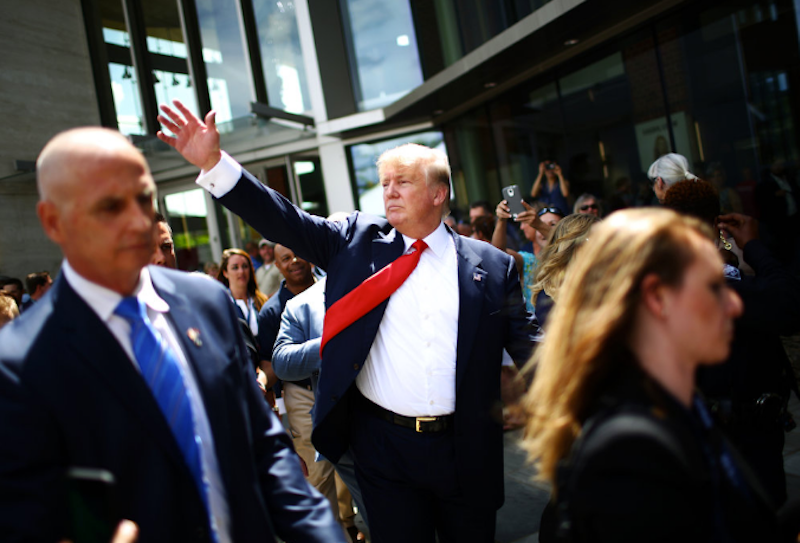 If think pieces were votes, Donald Trump would already be president. His continued success in the Republican primaries has been great fodder for journalists, with publications on both the left and right searching desperately for an explanation for the presumptive GOP nominee’s inexplicable rise. Some have argued there is no precedent for Trump’s success, while others point to Ronald Reagan, who used the public’s familiarity with him as a show business figure to win votes, or Barry Goldwater, another divisive, nativist candidate.

But maybe Trump’s real antecedent is a bit closer than that. George W. Bush? No, even closer. Watching Barack Obama’s final White House Correspondents Dinner on Saturday, I was struck by how our current president’s popularity with Democrats is predicated on the same tool that’s allowed Trump to succeed with Republicans who may disagree with him in fundamental ways. They’ve ingratiated themselves with the American public through a mastery of pop culture.

Can you find a liberal who didn’t grin when Obama dropped the mic at the end of his speech on Saturday night? Even those who criticize Obama from the left can’t help but admire his superb comic timing. More importantly, Obama has conditioned us to do so. We giggled when he went on Zach Galifianakis’ Between Two Ferns, watched as he announced his annual March Madness bracket on ESPN, and soaked up his appearance on Jerry Seinfeld’s Comedians in Cars Getting Coffee.

Through his use of pop culture, Obama’s inserted himself into our daily lives, and made us see him as a friend, the way we feel close to sitcom characters. It’s not unlike how FDR used his fireside chats, and it’s allowed liberals to overlook all the positions Obama’s taken that have been anathema to the Democratic Party for decades. Offshore drilling. The drone war. Expansion of the surveillance state. Unprecedented prosecution of whistleblowers. Libya. The “kill list.” A health care reform plan proposed by a Republican thinktank. Why do Democrats overlook these serious deviations from conventional progressive wisdom? Maybe it’s because they “just like him.”

It feels similar to what we hear from Trump supporters when they’re confronted with the offensive statements the candidate has made or deviant policy positions. They generally brush it off by saying something like, “I don’t agree with everything he says, but…”

How does he do this? The same way Obama did, except he doesn’t have to try as hard. He doesn’t need to employ pop culture references. He is a pop culture reference. Even before starring on The Apprentice, he was our society’s answer to the question, “What does a rich guy look like?” He cultivated that image through a smart, exhaustive PR campaign that started in New York in the 1980s and spread through the nation. He did magazine cover stories and appeared on Lifestyles of the Rich and Famous. He did a cameo in Home Alone 2: Lost in New York, and popped up in numerous television shows, including Spin City, The Nanny, Fresh Prince of Bel-Air, and Sex and the City. In none of these did he ever play a character; he was always just “The Donald.”

He proved to be an expert in branding, making “Trump” synonymous with “successful,” and the dividends of that investment are paying off today. When people support Trump because they think his “business savvy” with help him fix America’s broken economy, they’re acting out of trust for the image he has created.

Neither Trump nor Obama is the first politician to employ the power of pop culture. But Obama took the office of the presidency down to the people’s level in a more sustained, systematic way. He’s made only three Oval Office addresses (compared to Bush’s six and Clinton’s 13), instead appearing on podcasts, web series, and TV shows like Running Wild with Bear Gryllis. He redefined what it means to appear presidential, and Trump has capitalized on that change.

I don’t mean to equate the policies or positions of Obama and Trump. Whereas Obama uses pop culture to promote enrollment in the Affordable Care Act, Trump does so to promote racial bigotry. Still, it evokes a lesson every president has to learn after they leave office: be careful what precedent you set because you never know how your successor will use it.