A song-cry at a party’s tragi-comic fall. 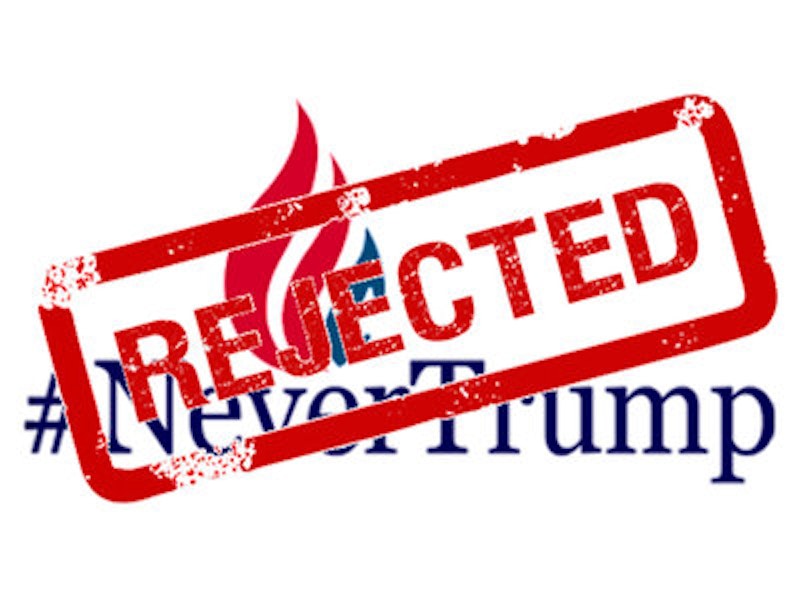 “Never Trump” wasn’t information, it was something to say. Marco Rubio said “Never Trump,” but he also said “I’ll support Donald if he’s the Republican nominee.” Because of Benghazi, Rubio clarified. For me, an onlooker, the “Never Trump” episode counts as a lesson and a reminder. Conservatives love a flourish more than anything, and “more than anything” just got underlined.

Consider. The leaders of the right see their personal hell break open. The world tilts, their followers flow out like a departing tide. “Never Trump” tears from the throats of the last true believers. And that’s it. There’s no follow-up. Not even the bare minimum of being against Trump and not for him.

The chaps felt brave when they said “Never Trump.” That thrill was enough. I find this typical. Trifling has grown on the Republicans, gone from a habit to a twitch to an infection of the nervous system. Now it’s their St. Vitus dance. Not waving, not drowning, they flap their arms and walk in circles. The right has always searched for new ways of inserting its head inside its body. Now Mr. Trump is here to assist, perhaps fatally.

I’m a moralist, maybe in the bad sense, and I think the right and the GOP became fans of performance. Fantasy took them over. I think George W. Bush marked the tipping point. Their guy knew nothing, but he was natural; that’s what they told themselves. Really, they meant that he played his part right. He moved correctly, he made jokes they liked. He behaved right, so they figured he’d make the right choices. After the wreck that followed, William Kristol figured Sarah Palin would get the GOP out of trouble. Everybody decided sure.

By 2012 the Republican debates had become a circus of professional talkers, a come-together for top performers in the art of paid speech. Mitt Romney and Rick Perry, the two active politicians, soldiered on through the crowd, trying to keep their chins steady so they could be president. Trump loitered on the sidelines and watched. He saw no reason he couldn’t walk on stage; so far he’s found nothing to stop him.

The American right has more than its share of political entertainers. I find that delightful about them as a tribe. But they’ve gone airy on us. They live for the song and they deliver nothing but. In 2016 the GOP’s young leaders were supposed to surge in. They showed up, looking shiny, but they had nothing to point to. Not individually and not collectively. No achievements, nothing the country should be grateful for, just a bust of Ronald Reagan with a rose Scotch-taped to its teeth.

I except Scott Walker, the man who broke Wisconsin. But nobody outside Wisconsin cared. He had thought they would. Everybody talked about the war between the free market and the state, and he’d kneecapped the state but good in his particular terrain. Surely he was the man to prosecute this struggle we all talk about. We’re the Resistance and they’re Skynet. Remember? Surely… Fellas, hey… By mid-August he had slunk off-stage, him and his bald spot.

Nobody believed their own talk. What the Republican base wanted wasn’t the free market, it was Hulk smash. One morning William Kristol woke up and found something big and mean looming over his bed. It was Donald Trump. Kristol was getting his throat thumbed by somebody from a reality show. But after Palin, who can talk about credentials?

Still walking in circles and flapping its arms, the Republican Party looks for a place to die. Things designed its way have a habit of falling down. “Never Trump” is what we say before we go to sleep.