Conservative America is a weird version of the limbo. 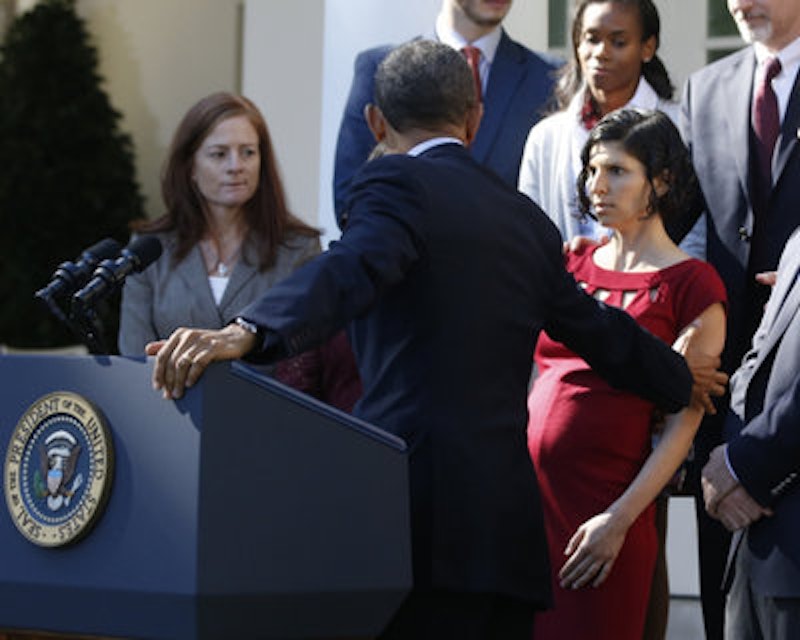 After standing in the sun and listening to President Obama speak for 30 minutes, a diabetic pregnant woman (and blogger) named Karmel Allison nearly fainted yesterday at the White House Obamacare “pep rally.” She was standing just behind and slightly to the President’s right. In the video, at about 0:21 you can see that’s she’s swooning slightly for a few moments. She looks to her right, seemingly thinking about asking for help. The President noticed the movement behind him, helped steady her, and told her “You’re okay,” and “I gotcha” before turning around and joking, “This happens when I talk too long.”

The moment seems innocent enough. There’s not a lot of false bravado. Obama doesn’t ask if there’s a doctor in the house. He has to ask for someone to help escort her out. The moment doesn’t have any outward signs of being faked. But leave it to the nutjob conspiracy theorists to accuse a pregnant diabetic woman who’s been standing in the sun for 30 minutes of faking fainting. One tactic they employ is to insinuate that it was faked (by saying for example that she “appears” to faint) and then leave it up to their anonymous Internet comment trolls to start calling the woman a “plant.” Ditto Twitter—shocking numbers of tweeters flooded the site with accusations the woman had faked the fainting. She appeared on Piers Morgan last night to make it clear she really fainted.

That this moment could be spun into something that the President faked is ridiculous. This is a time when the conservatives, whose leaders cost the American people billions of dollars with their outrageous schoolyard brawl of a shutdown should be circling the wagons to try and figure out how to unify the party and start sending out positive messages to the American people before they get their asses handed to them during the next election cycle. But while no actual politicians I’ve seen so far (yet) have been dumb enough to publicly accuse an Obama fake-out, there are play-by-play conspiracy theory breakdowns popping up all over the web.

The New York Times reported Sunday (“Fiscal Crisis Sounds the Charge in GOP’s ‘Civil War’”) that the budget fight “heralded a very public escalation of a far more consequential battle for control of the Republican Party, a confrontation between Tea Party conservatives and establishment Republicans that will play out in the coming Congressional and Presidential primaries.”

I agree with Paul Rosenberg at Salon who argued yesterday that we need to “stop enabling the right; the media just makes dysfunction worse” and that “our politics are a disaster because the media—and the president—pretend conservatives are dealing with facts.” But it’s not “the liberal media’s” fault that conservatives keep doing and saying things that are so inconceivably stupid. You can’t blame Jon Stewart for skewering Republicans when they’re providing so much material. He even went so far last night to refer to Republican mischief by predicting “this country looks like it is poised to turn bluer than a Smurf’s balls after dry humping a bottle of Windex.”

Republicans jumped up and down over the fact that the Obamacare website’s been down—even Stewart spent time mocking the “99 Problems and a Glitch Is One.”

Obama’s tenure is like the Bad News Bears of presidencies. Whether Obamacare will be remembered as a reigning victory or a crushing defeat will be shaped by history, but yesterday’s example of the President putting the Obama in Obamacare doesn’t seem like something that was artificially produced. Republicans and conservatives and conspiracy theorists can say what they will, but the POTUS just isn’t as stupid as they are.