The NSA Case Just Got a Lot Stranger

Obama wanted his own private tap on Angela Merkel? 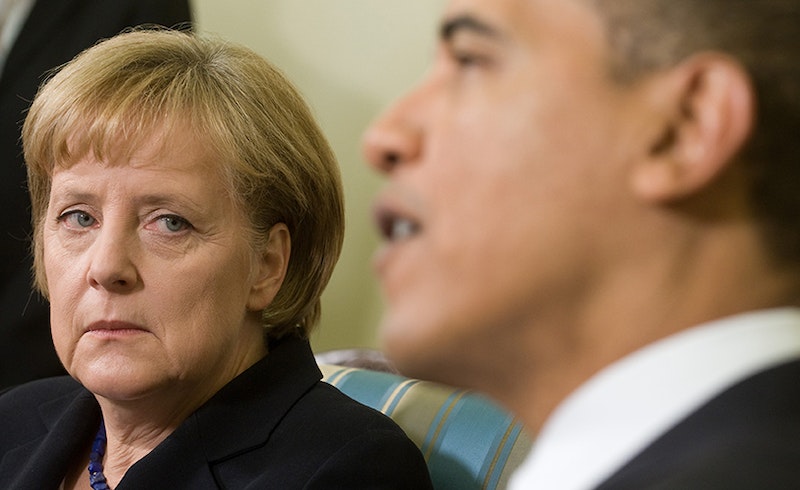 Years ago I worked with a very loud young woman who had simple views. She loved Bill Clinton and considered herself a great liberal. The Welfare Reform Act of 1996 knocked her for a loop. “I don't understand welfare reform,” she announced, looking at The New York Times. I say “announced,” not “admitted,” because she meant that welfare reform didn't compute with her and therefore didn't count as part of reality, not in a full-fledged way. Rather than face the grim sight of Clinton selling out the poor people, she would keep the whole business over there, out of her line of vision.

I'm going through something like that. A German newspaper claims that Barack Obama ordered more surveillance of Angela Merkel, the chancellor of Germany. Bild am Sonntag says Obama was briefed in 2010 about how the United Stated had been tapping Merkel's phone for years. He let matters proceed, the newspaper says, and then at some point he decided he wanted more information about her. Yahoo News, paraphrasing the German news story, continues: “As a result, the NSA stepped up its surveillance of her communications, targeting not only the mobile phone she uses to conduct business for her conservative Christian Democratic Union party but also her encrypted official device… Only the specially secured land line in her office was out of the reach of the NSA, which sent the intelligence gathered straight to the White House bypassing the agency's headquarters, according to the report.”

I don't understand. I can cope with Obama as someone who data mines and authorizes foreign hits. But as a man who wants his own secret pipeline into an ally's conversations—no, it doesn't compute. Angela Merkel is not a terrorist and she couldn't be supporting terrorists, at least not anti-American ones. She's the chancellor of Germany. If she's talking with people who lead back to jihad high command, the security of Europe has entered a very strange period.

We are left with two alternatives. The story isn't true (and a front-page story in the Oct. 28th edition of The Wall Street Journal reports that NSA officials say that Obama didn’t know of the tapping), or Barack Obama is doing something heinous and inexplicable. That's where I'm defeated. I can accept that the Bush administration spent years listening in on Merkel's talks with party functionaries, since the Bush people tended to do things that were daffy. I don't mean the sin was trivial, of course, just that obviously defective people don't need a motive for defective behavior. A dog rolls in mud, a chimp stretches his balls, the Bush administration tapped whoever they could. But Obama ordering his own private tap on Merkel's “encrypted official device”? As potential facts go, that one's a brain wrecker.

The NSA denies the claims made by the Bild am Sonntag. But this denial is very specific. The German paper says Obama was told about the Merkel operation by Keith Alexander, the agency's director. The NSA says stoutly that Alexander “did not discuss with President Obama in 2010 an alleged foreign intelligence operation involving German Chancellor Merkel, nor has he ever discussed alleged operations involving Chancellor Merkel." No word on whether somebody else told Obama, no word on whether Obama ordered a second phone tap, and no word on whether information from the alleged taps went straight to the White House.

A wise Frenchman reflects. Bernard Kouchner is a craggy-faced, thatch-haired man who made his political career on the left but served as his country's foreign minister during a conservative presidency, that of Nicolas Sarkozy. Here's what Kouchner had to say about U.S. taps on French citizens: “The magnitude of the eavesdropping is what shocked us. Let’s be honest, we eavesdrop too. Everyone is listening to everyone else. But we don’t have the same means as the United States, which makes us jealous.”

It's rare for somebody who's being picked on to have that much perspective. But Kouchner, a European living with his fellow Europeans under U.S. surveillance, sees that their condition wasn't caused by any special malevolence in the U.S. character. If I may expand on his remark, the United States has an unparalleled edge in resources. As would any nation under such conditions, it has developed a hyper-military (which is more or less in plain view) and also a hyper-apparatus for national security. That giant natsec apparatus is why 70.3 million phone records of French citizens got Hoovered up in 30 days. The machine is there and it goes to work, as it would no matter what country built it.

All right. The results are grotesque and regrettable but easily explained. But Obama and the alleged special tap on Merkel? That's strange territory.