The Tea Party’s Free Ride is About Over

Back home for the bomb-throwers. 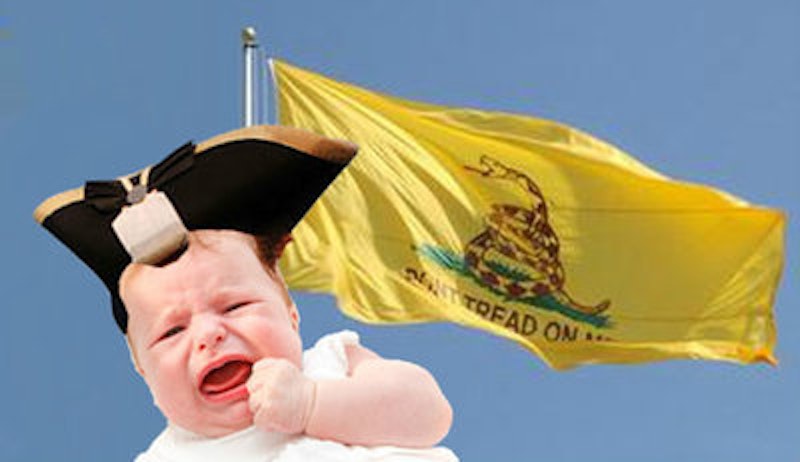 The government shutdown, mindless though it was, surely was worth the entertainment value to learn what a roster of comedians we have in Congress. But you already knew that. It’s always been an article of faith that people in public office are pretty much like the people who elect them. If that is the case, American voters share the credit for the worldwide spectacle of government as comic opera.

A sampling of the wit and wisdom of our elected officials at work and at play:

Rep. Michele Bachmann, of Minnesota, the original Tea Party den mother on the subject of the government shutdown: “We’re very excited. It’s exactly what we wanted, and we got it.”

“Most Americans could not give a flying flip about politicians in Washington. Who cares? Most of us are in cheap suits with bad haircuts. Who cares?

Rep. Ted Yoho, of Florida, a large-animal veterinarian, another Tea Party exemplar, proving conclusively that he slept through Economics 101: “I need to be schooled, or somebody needs to convince me, why we need to raise the debt ceiling.”

“I personally think it would bring stability to world markets, since they would be assured that the United States had moved decisively to curb debt.”

Rep. Renee Elmers, of North Carolina, taking the shutdown very personally as a pocketbook issue: “The thing of it is, I need my paycheck. That is the bottom line.”

Rep. Mark Stuzman, of Indiana, summing up the government shutdown as pointillism without a point: “We’re not going to be disrespected… We have to get something out of this. And I don’t know what that even is.”

Rep. Louis Gohmert, of Texas, who the Daily Kos describes as America’s dumbest congressman: “A debt default would be an impeachable offense by the president.”  Gohmert made the following observation about the demand for a clean continuing resolution, stripped of demands and conditions, to keep government running: “Clean is not clean. It’s pretty dirty.”

And finally, Gohmert made the following remarks at the conservative Values Conference about Sen. John McCain (R-AZ): “When it comes to the shutdown that’s going on, I heard just before I came some senator from Arizona, uh, a guy that liked Quadafi before he wanted to bomb him, a guy that liked Mubarak before he wanted him out, a guy that’s been to Syria and supported al Qaeda and rebels, but he was saying today the shutdown has been a fool’s errand. And I agree with him. The president and [Senate Majority Leader] Harry Reid should not have shut this government down.”

Rep. Steve King, Gohmert’s rival for the dumbest member of Congress: “We can go on indefinitely without hitting default.”

Sen. Rand Paul, of Kentucky, upon learning that a group of veterans had been denied entrance to the World War II monument:  “Some idiot in the government sent goons out there to set up barricades so they couldn’t see the monument.”

House Majority Leader Eric Cantor, of Virginia, with his usual curled-lip smirk did the old dipsy-doodle on the facts: “This shutdown is a result of President Obama and Majority Leader Reid refusing to reach across the aisle in a divided government, a problem that has sadly been a hallmark of this administration.”

House Speaker John Boehner, of Ohio: “We tried. We lost.”

You can bet that if these were the good old days of political machines and iron-willed bosses, the government shutdown would never have happened. A couple of phone calls, a bridge here, a dam there, a few patronage jobs and the matter would have been settled with a wink and a handshake. Those were the days of party discipline and unflinching loyalty before money and gerrymandering took over the political process.

As if to underline the point, the shutdown was resolved only after the Senate worked out a last-minute compromise that included a $2 billion earmark (pork barrel project) in Kentucky, where Senate Minority Leader Mitch McConnell (R) is in a tough reelection contest with a Tea Party opponent. In Washington, pork is still power, although no one likes to admit it and House Republicans claim to oppose it.

A couple of generations ago, political bosses, and even governors and mayors, exercised coiled-fist control over congressional delegations who were beholden to the precinct organizations’ voter delivery systems that got them elected. Redistricting had not yet been subverted to the point where the voters no longer choose officials but the officials pick the voters they want. And the Supreme Court had not yet decided that corporations are people with smokestacks and unlimited campaign cash. Today’s politics depends on how much freedom of speech an individual or group can afford.

Political reform is fraught with unintended consequences. First, Political Action Committees, then the Supreme Court ruling on campaign cash eliminated candidates’ reliance on party bosses and machinery for election funding and handed the political process to special interests. Thus we have dystopian Washington awash in cash. (The Supreme Court, based on an Oct. 8 hearing, appears ready to lift restrictions on overall individual campaign contributions directly to federal candidates. They are now capped at $48,000 every two years.)

Congressional Republicans, as every political hobbyist knows, are fragmented into several factions—moderates, conservatives, and the Tea Party marauders. The most rebellious and intractable wedge is the self-destructive Tea Party, a group of 30-50 hell-raisers who are beholden to no one, not even Wall Street money, so long as they are assured a no-primary election.

And those organizations that underwrite the guarantees are Heritage Action, the political action arm of the Heritage Foundation, Freedom Works, the Club for Growth, the Tea Party Patriots, and others that are supported financially by corporations and wealthy individuals such as the Koch Brothers.

But the free ride may be over for the Tea Party bomb-throwers. Their belligerent hold-out and defiance of Speaker Boehner has set up a showdown between the Tea Party and the moderates and money interests loyal to Boehner. Some of them may have primaries next year after all. Boehner appears powerless to use the hidden persuaders of his office to discipline the Tea Party outliers because they frankly don’t give a fig about the trappings of office. The Tea Party came to Washington to fight the enemy—their government.

But the Tea Party is fighting back with other people’s money. The Heritage Foundation’s political division has endorsed McConnell’s Tea Party opponent in Kentucky as well as a Tea Party candidate who is running against Sen. Thad Cochran in Mississippi. Both McConnell and Cochran supported the Senate plan to end the government shutdown and raise the debt ceiling, an artifice left over from World War 1.

President Obama, for his part, remained steel-spined and steadfast and, under pressure from House and Senate Democrats, refused to fold this time as he has in the past. The showdown was, without question, a clear victory and a new beginning for Obama who wasted on time pushing his other priority items—immigration reform and the farm bill. As for the Tea Party cohort, they will forget nothing, because they learned nothing.