The Media Story of 2014: Legendary Magazines Shrink in Size

If they don’t go out of business entirely. 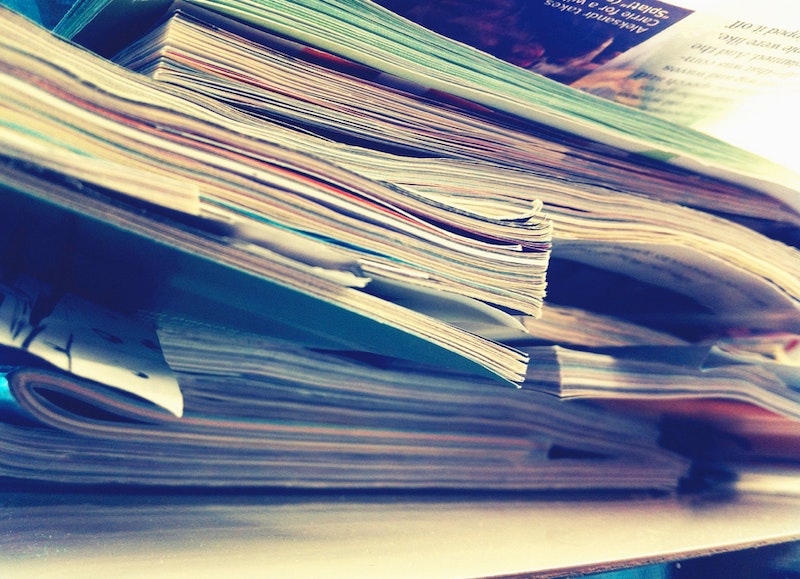 There was some clucking in the media industry mid-week—for about half an hour—when Conde Nast announced it was ending its internship program, in the wake of lawsuits filed by two former interns at W and The New Yorker on the grounds they were paid dirt for tasks performed. As if Conde Nast doesn’t have a lot more to worry about than snot-nosed kids objecting to running errands for editors. Were Lauren Ballinger and Matthew Leib, the litigious duo, forced to accept internships at those CN titles? Of course not. It’s open war on corporations, I suppose, but the carnage will include countless young men and women who would gladly work for free at a publication like Vanity Fair. After all, that’s how the aggressive and ambitious ingratiate themselves with the grandees in charge, and often move on to paid positions.

I understand it’s a difficult labor market, especially in media, but it’s only going to get worse. From Lauren Weber’s Oct. 24 Wall Street Journal article: “Unpaid or low-paid internships have long offered untested workers a foot in the door, particularly at media companies and nonprofit organizations. But some colleges and corporations, along with some interns themselves, have questioned the amount of job training the programs offer and have criticized them for hurting diversity efforts by favoring individuals who can afford to go without a living wage for the weeks or months required.”

So it’s a 99% thing. Occupy Conde Nast! (Actually, it’d be a pretty cool spectacle to see 1000 youngsters camped out at Times Square, maybe tossing an egg or two at Graydon Carter or Anna Wintour, but that’s not likely.) As for elite (or at onetime elite) publications “favoring” affluent journalistic aspirants, hasn’t that always been the case? The dynamics have changed, since newspapers and magazines are shedding rather than adding employees, but as I recall it was once mandatory to have a degree from Harvard—sometimes Princeton would suffice—just to get an appointment at The New York Times.

But, as I noted above, magazines ranging from hobos like Spin to prom queens such as Vogue, are in dire straits and it has nothing do with interns. The other day I received, by post, a solicitation from Conde Nast that, rather embarrassingly, read: “Private sale notice for Mr. Russell B. Smith. Right now you can subscribe to world’s most amazing magazines for just $5!” The deal: you get to pick any (or all) CN titles and get five issues of The New Yorker, Wired, Lucky, GQ, Details (a reminder, I think, that the silly men’s fashion mag is still publishing), Conde Nast Traveler, and so on, for just five bucks. Can you imagine such degrading trolling for subscribers to prop up numbers for vanishing advertisers taking place even three years ago? Used to be that when your subscription to The New Yorker was up, one re-up poke was the extent of it—no quick answer and you were dropped from the rolls like a party guest who spilled wine on his shirt.

I think a big story in 2014, at least in this industry, will be the severe downsizing of magazines. And onetime kingpin Conde Nast is no exception. Some of their magazines may be full of advertisements, but the general public has no way of knowing how much they were sold for. And then there’s the editorial expense of high-profile writers who’ve been rewarded with fat contracts to produce long, and often excellent, articles at a sporadic pace. Trouble is—and you can bleat on about readers devouring 50,000-word stories on tablets or laptops or even cellphones, but I don’t believe it—a lot of the content is simply not read. For example, my Oct. 28 New Yorker came in the mail on Oct. 22 (early!) and I flipped to Anthony Lane’s fine review of Blue is the Warmest Color. And that was it. I’d meant to read George Packer’s “Comment” on the government shutdown, but got distracted by a series of texts, and anyway, it’s not as if I wasn’t up to snuff on the GOP’s really dumb strategy of trying to take Obamacare hostage. I do believe I’ll get around to David Sedaris’ piece “Now We Are Five,” but that’s mostly because my son Booker saw him read it at George Washington University last week and said it was terrific. Then again, it’s World Series week… so, who knows.

Likewise, the only article I read in Vanity Fair’s November issue was James Wolcott’s misty-eyed essay on the 50th anniversary of JFK’s assassination, and now the magazine’s stacked up in my office with similarly barely-opened publications. In a slower-paced world, like the 90s, I probably would’ve read Maureen Orth’s story about Mia Farrow, among other choices, but today? Not a chance: this VF is slated for the trashcan.

When CN titles lose longtime readers like me, it’s not a vote of confidence. As if my kids, or their contemporaries, are going to pick up the slack. Like The New York Times, the CN magazines that survive—and there will be a bloodbath—are headed for niche status, and when that happens it won’t just be the intern department that’s shuttered.