Mamas, Don't Let Your Babies Grow Up To Be Politicians 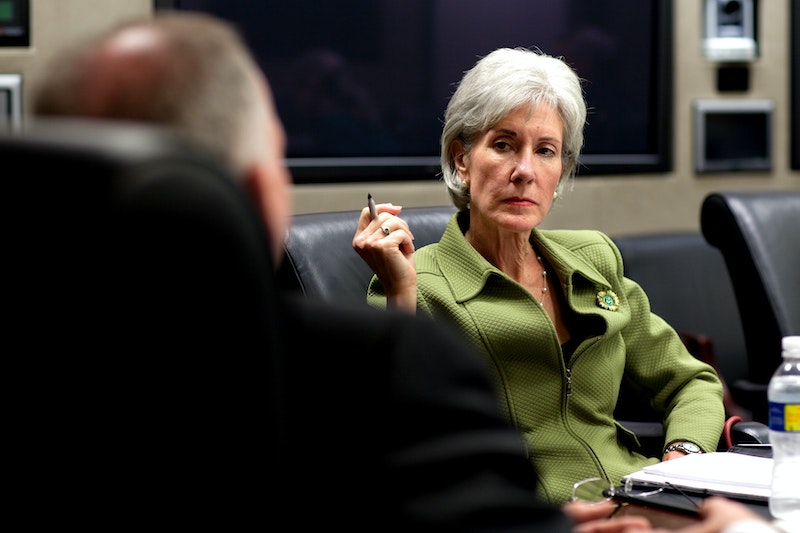 Congress' approval rating fell to just about the margin of error during the shutdown, and no wonder; politicians have been in the news, and there's no surer way to increase one's loathing of politicians than by reading about them. Along those lines, I was struck by this NPR report about Sen. Pat Roberts (R-KS).

Though Roberts is a Republican, he's also a longtime family friend of Health and Human Services Director Kathleen Sebelius. Roberts worked for Keith Sebelius, Secretary Sebelius' father in law. When Kathleen Sebelius was appointed secretary in 2009, Roberts was vocally enthusiastic. According to the NPR report, he said it was a "special and great opportunity" to have someone from Kansas in the cabinet.

But these days Sebelius is associated with the roll out of Obamacare. Roberts faces a primary opponent in 2014. That primary opponent isn't particularly strong, but still, Roberts doesn't want to be seen as having anything to do with Obamacare when the Tea Party wackos come knocking. His ties to Sebelius could hurt him.

And so he's jettisoned her. He’s now one of the most vocal members of Congress calling for her resignation; he’s blamed Sebelius personally for the website issues that have plagued Obamacare sign-ups; he's said that she’s "failed."

NPR quotes political scientist Burdett Loomis explaining that Roberts is just "doing what savvy politicians do." Kansas is very Republican; Obamacare is unpopular there; therefore, Roberts is positioning himself to appeal to his constituents.

Along the same lines, Jonathan Bernstein wrote recently about the humorous spectacle of a "Gang of 14" Senators taking to the floor to talk about what a great job they did crafting a compromise to raise the debt ceiling even though the final deal wasn't based on their compromise. As Bernstein says, "They are immensely proud of having participated in a process which had little or nothing to do with ending a shutdown almost three weeks in, and raising the debt limit at the last minute." Bernstein basically shrugs and concludes "this is just what politicians do, and if you want to have a functioning democracy, you're going to need some politicians."

I'm sure both Loomis and Bernstein are correct. The issue here is not that Roberts and the Gang of 14 are horrible hypocrites. If you're a politician, you do what your constituents want, regardless of whether that involves spitting on a longtime family friend. If you're a politician, you race for any available spotlight and boast about your achievements even when you know you haven't done anything, because you want to get elected and putting yourself in front of a television camera reminds your constituents that you exist. There's nothing personal here; it's just the way the job is set up.

But to a considerable extent, the job is set up in such a way that doing it well makes you a loathsome person. Surely in most ethical systems, publicly backstabbing a friend in the interest of personal gain is noxious. It strains credulity to believe that Roberts really believes that Sebelius is horribly unqualified. He knows that Sebelius is not going to resign, and that, as a way to protest Obamacare, attacking Sebelius is therefore completely ineffectual. Going after her doesn't advance any policy goals. It just signals to his constituents that Roberts hates Sebelius, and that he’s repudiated their longtime connection. In this case, doing what politicians do involves being a selfish two-faced snake.

Similarly, in most situations, taking credit for something you didn't do is an ethical failure. Boasting about accomplishments that you didn't accomplish is gauche and repulsive. Yet for politicians, it's de rigueur. The logical conclusion is that politicians are, by nature, repulsive.

You can argue, as Bernstein does, that whether or not they are repulsive, you need politicians. No one’s figured out a way to run a government without them, anyway. But as a parent, I sure hope my child grows up and pursues a career with relatively high ethical standards. I wouldn't disown him if he became a politician, but I’d sure be depressed.