Clinton Is Wrong About the Gender Wage Gap 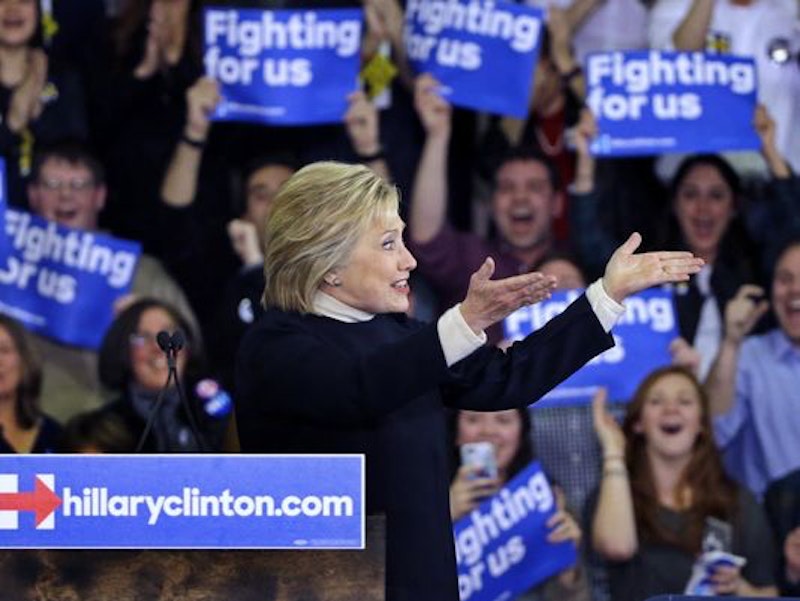 Hillary Clinton fashions herself as the champion of all downtrodden Americans. She's making wage equality a big issue for attracting women voters, tweeting out blurbs like this: "20 years ago, women made 72 cents on the dollar to men. Today it's still just 77 cents. More work to do. #EqualPay #NoCeilings."

This "77 cents" figure has become axiomatic among liberals, who generally accept that men make much more than women for doing the same job. It's hardly surprising, given how often President Obama has explicitly mentioned it. He used it while campaigning, and he brought it up during his 2013 State of the Union speech, and then repeated it in his speech one year later, saying women "still make 77 cents for every dollar a man earns." His economic advisor, Betsey Stevenson, stated women are "stuck at 77 cents on the dollar," but she was forced to apologize when an informed reporter called her out on it.

Trigger warning to campus feminists: one of your treasured concepts will now be discussed factually. It may make you feel unsafe. The calculation behind the 23-cent wage gap uses raw numbers reflecting the total earnings of all male and female full-time workers. It includes no input on professions, job positions, hours worked, college majors, or any other distinguishing factors. So much for the 77-cents myth. It is not a comparison based on men and women doing the same job.

Take a look at the field of medicine. On average, male physicians make significantly more than female physicians. At first glance this sounds bad, until you know that more women tend, for whatever reason, to go into less lucrative specialties such as pediatrics or family medicine rather than orthopedic surgery.

Women make different career choices, and maximizing their salary isn't always a high priority. Third-wave feminists, because it fits their agenda, want you to believe that women are paid less, across the board, as the result of some vast patriarchal conspiracy, and they repeat the 77-cents myth like a mantra. It's been effective too, as good propaganda always is. Mention the 23-cent wage gap to anyone at Whole Foods and prepare for some earnest chagrin.

Modern feminists have no interest in revealing larger truths that interfere with their incessant victimhood narrative. They’d have you believe that, even though American and Western European women are more liberated than ever, the advances for women's equality that began in the 1960s have amounted to very little. A measly five extra cents per hour in 20 years, according to Hillary.

You won't hear the modern feminist mentioning facts like the 3:1 male/female suicide ratio, the 10:1 incarceration ratio, the shorter life spans of men, and all the brutal jobs they do. Nor will you hear about how many more women than men have received college degrees for decades now, and that some studies have shown their starting salaries out of college are actually higher than men's.

The reality is that while there are many more men than women CEOs, men are disproportionately represented at the very bottom of the economic ladder. Ignoring this fact, while constantly touting a bogus statistic, produces a distortion of reality designed to support an ideology. If you were to go on a TV show with liberal panelists and mentioned the other side of the coin, where men are suffering, they'd be condescending, and assure you with the irrelevant opinion that the patriarchy is in no danger. Well, the patriarchy isn't doing jack for all the Iraq War veterans who are homeless and taking their own lives.

At this point, the 77-cents myth is like Goebbels' "big lie." If you tell it enough, it becomes the truth. It's concise too, making it perfect for sound bites and tweeting, but advocacy data from fainting couch feminists needs close scrutiny. It's the radicals who often set the agenda in any political movement. They're shrill and militant, and their intimidation tactics work. This applies to modern feminism, and it's a reason why so many people, including women, reject it. Most women want equal rights, but many aren’t interested in a reactionary movement intent on infantilizing them with a victimhood narrative and an obsession with the patriarchy. They see through the "findings" rendered by politicized feminist scholarship, and have little interest in pitting men against women.