Humans can live below 50 percent. 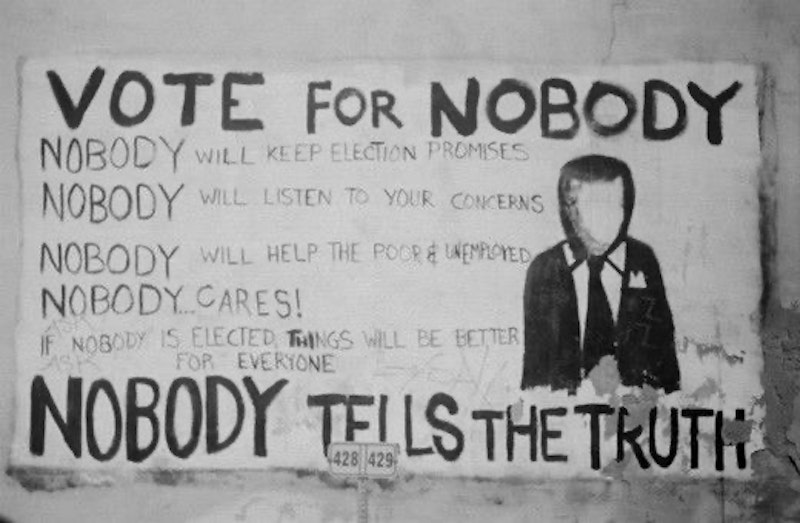 I could tell something was different when the 2008 financial crisis hit because, despite what seasoned veterans said—that such setbacks occur regularly and the market always bounces back—I got the sense that this time people weren’t just losing their faith in one sector, such as housing, but in the whole idea of the stock market. A loss of faith like that can end up changing the whole system, eventually.

So it may be with this election season.

People are becoming comfortable—probably a bit too comfortable, from the establishment’s perspective—saying that the whole process is a farce regardless of the outcome. That comfort arises in part because the shiny brass ring of being in “the majority” no longer tempts us as it once did. That’s good.

Unlike individual freedom, which means each of us minding his own business and leaving others unmolested to do likewise, this whole “democracy” thing, even when functioning as smoothly as possible, has never offered anything better than being in the group that outnumbers the other group, and then bossing around the smaller group accordingly. Barbarism at its most ancient and primitive.

In a sufficiently small or homogeneous population, majority-rule appeared sufficiently correlated with the will of the populace to be morally acceptable. That dangerous illusion becomes harder to maintain as society grows larger, more diverse, more individualistic, faster-changing, more accustomed to niche markets, and more pampered by an array of choices tailor-made for our individual tastes. No one really wants to wait around while a 50 percent-or-more coalition forms before taking action anymore, nor should they. They’re used to clicking, privately.

The superiority of individual choice will seem even more intuitively obvious once we get rid of the disastrous relic that is majoritarian government. Don’t get me wrong: “democracy” has multiple meanings, some good, including “self-rule as opposed to tyranny,” but the simple, violent sense of it—“majority rules minority”—we can safely do without. One of the wonderful things about strong individual property rights is not just that they make the economy more efficient but that they provide the force field enabling each of us to tell the stupid, crazy hordes making up the rest of humanity: leave me out of your scheme this time.

I just heard that Richard Gere will soon star in Three Christs, a film adaptation of psychologist Milton Rokeach’s famous mid-century account of his dangerous attempt to cure three men who each believed they were Jesus by bringing them together to talk. Rokeach had hoped they would confer and reach the consensus view that they couldn’t possibly all be Jesus and that the idea that one of them must be could well be delusional. Instead, they fought bitterly and at least two came away convinced the others were insane. The real lesson: if you don’t want a crazy fight, stop trying to unify people.