The haze has yet to clear in the Clinton-Trump election. 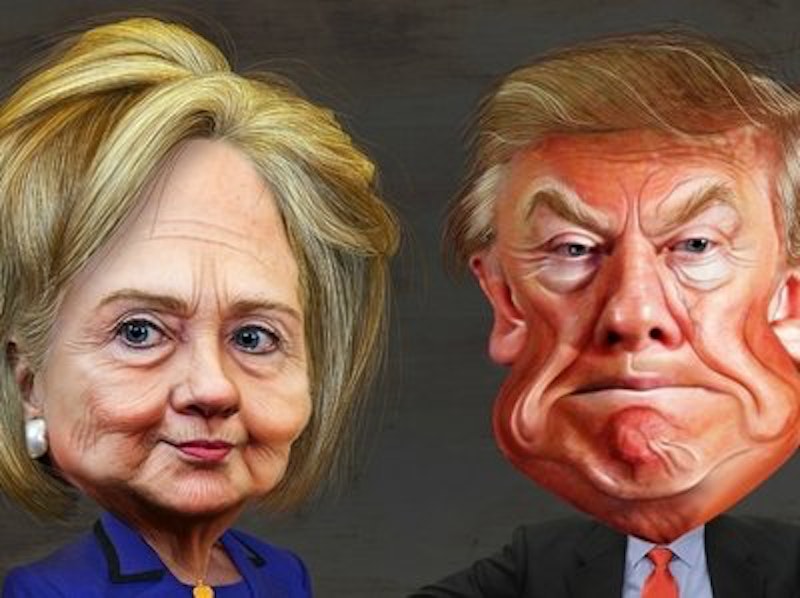 Donald Trump is kicking butt. Sixteen other Republican presidential candidates are cursing what went wrong. Now that the path is cleared of rivals and Trump will eventually reach 1237 delegates or more to become the Republican nominee, the next speed bump in his way is whether he can assemble 270 votes in the Electoral College to become president. It was said that Trump would never clear the nomination. One writer, The Washington Post’s Dana Milbank, promised to eat his column if Trump did. Newsprint is a dish best served cold.

The theater is open for a contest between two spectacularly unpopular candidates whose detestability rankings are in the 70s for Trump and the 60s for Hillary Clinton. Trump is viewed unfavorably by just about every voter subgrouping except under-educated white males—the Archie Bunker vote—while Clinton’s downside is just the reverse: Women, blacks and Hispanics like her, men don’t. Yet just about everybody distrusts Clinton. America, pick your poison.

Confounding the race further is Clinton’s attempt to swat away Bernie Sanders, who refuses to go quietly, while desperately trying to segue to the general election and the unpredictable Trump. The tenacious Sanders has vowed to remain in the race through the Philadelphia convention even though he appears mathematically cut off from the nomination. Clinton faces a short string of losses in West Virginia, Kentucky and Oregon before going on to probably win California and New Jersey for what has been a difficult, drawn-out wrap-up. Sanders is intent on inserting his views into the party platform and making certain that Clinton doesn’t drift back to the political center where she’s naturally more comfortable. Sanders and Trump are messaging basically the same alarm and the long-range question for Democrats is whether Sanders’ committed followers can identify with Clinton.

The conventional arithmetic—and so far all conventions have been dead-ass wrong this year—is that all Trump has to do to clinch the presidency is win all the states that Mitt Romney carried in 2012 and he’ll have better than 200 electoral votes. Pick off a few more states and it’s in the bag, so the rosy formulation goes. The primary season is ticking down, with a couple of pismire states such as West Virginia still to go until June 7 when California (172 delegates) and New Jersey (51 delegates) vote. That should be lock-up time for Trump and put an end to fatuous talk of contested conventions and third party candidates. That last option is foredoomed by the calendar and the complexity of individual state laws.

But Trump is bedeviled by a problem that doesn’t appear to trouble him personally, and that is the repellant fractures within his own schizophrenic Republican party. Win or lose the White House, many say they simply don’t want Trump and won’t support him. Some party leaders, at least nominally, are openly repudiating Trump, such as the last cycle’s losers, Mitt Romney and Rep. Paul Ryan, as well as a troika of Bush family members, George H. W., George W. and Jeb.

But the joke is on them. Trump has a better handle on the Republican voters than they do. Trump has dispatched 16 of the GOP’s leading muckity-mucks; he’s insulted women, Hispanics, Muslims and the media; he’s berated trade agreements, opposed foreign intervention, threatened to wall of Mexico and make them pay the construction costs; threatened to tax the rich while at the same time expand social benefits—an upside-down admixture of Republican orthodoxy and conservative shibboleths that baffles politicians but appeals to voters. Trump flip-flops on issues almost daily. Billionaire populism is different from the other kind.

There’s an argument within the Party that Trump is totally bereft of any beliefs at all but is skillful at reading and echoing the minds of the Party’s grass roots who believe that America’s economic, cultural and moral structure is being kicked out from under them by the same political institutions that’re supposed to serve them. They feel betrayed and left behind and view Trump as the candidate to reverse their misfortunes. Now the test is whether Trump, facing a general election constituency that is broader and deeper than the Republican base, can become more expansive and spread his appeal.

In Maryland, for example, with a piddling 10 electoral votes, the popular Republican Gov. Larry Hogan, the titular GOP leader, has vowed to boycott the Cleveland convention and to sit out the presidential election in the state that Trump carried handily in the closed primary election but which probably will swing heavily for Clinton in November. Yet Hogan’s mentor and patron, Gov. Chris Christie, of New Jersey, has embraced Trump in a very public way and could influence Hogan to change his mind. Hogan is up for a second term in 2018 and needs Democrats, who outnumber Republicans two-one, to win reelection in Maryland.

But behind the obvious Republican unease with their presumed nominee, there’s the customary backstage maneuvering when presidential elections intersect with personal interests every four years—the grab for power. Enlightened Republicans will not sacrifice power over a difference in personalities and issues. The GOP has won only one presidential popular vote in the last six elections; the GOP has not occupied the White House for eight years; the electoral map favors Clinton; the GOP controls the House by 30 seats and the Senate by six and five of those six seats are states where Democrats are favored. Put another way, the GOP as a party is a wreck.

The aftershock of Trump’s glide to victory will wear off in a short time. And the Republican noisemakers and purists who belittle his candidacy may suddenly wake up and realize that the next president will appoint three, possibly four, Supreme Court justices. Suddenly a President Trump doesn’t sound so bad, better to Republicans than a President Clinton. And while Clinton clings desperately to the legacy of President Barack Obama with promises to expand on it, a President Trump would likely attempt to undo the most sacrosanct part of the package, Obamacare, which he has called a disaster he’d replace—with what, he hasn’t said or doesn’t know.

The big-top issues are only the tip of the power pyramid. There comes with the presidency, as well, thousands upon thousands of patronage jobs, from cabinet level to street level, that populate the federal government system of about 2.5 million employees. They’re the bureaucrats who not only help shape policy but also enforce the whim and will of the White House. Most clear-minded Republicans are not about to pass up the chance to change the direction of the country and reestablish their party by seizing control of the government bureaucracy.

Finally, there are billions of dollars in lobbyists fees and think tank subsidies up for the taking in every presidential election as the revolving door spins with changes of administrations. Those who are squawking the most right now are the very ones who’ll have their palms upturned and extended in November. Even the Koch brothers are hedging their bets and withholding their funds, neither against Trump nor for Clinton, but waiting for the haze to clear.

So before Trump can begin assembling the electoral map, the biggest challenge facing the presumptive Republican nominee is whether he can restore a sense of loyalty within his own broken party and arrive at the convention with a united front and a show of support. And the same goes for Clinton who eventually will have to coax Sanders supporters into her ranks. This could be the first time in a long while that the two party nominees may not have solid lines of party support going into the November election.