Now more than ever. 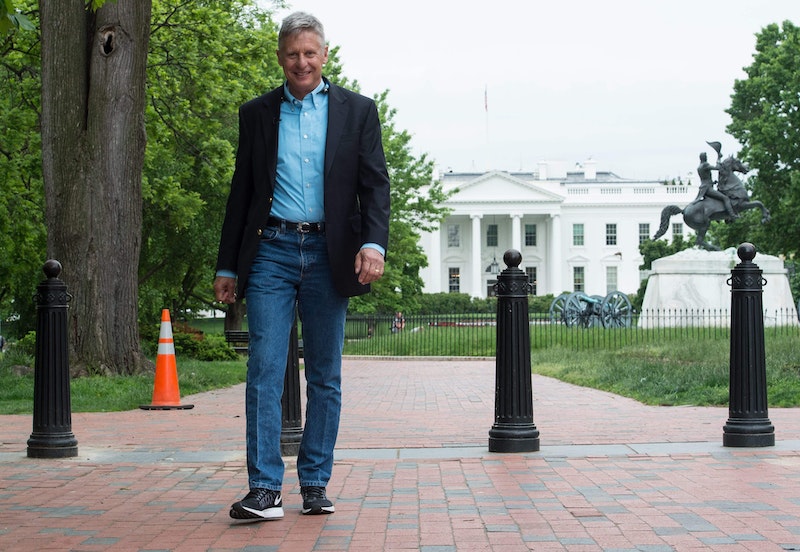 There are several arguments commonly deployed against voting Libertarian, none of them convincing this year. Here are 10 that recur.

First, there’s the usual dogmatic insistence that the Libertarian candidate for president “can’t win.” He usually doesn’t win, it’s true, but then, if Donald Trump “can’t” take over the Republican Party and then proceeds to do so, many other things are possible. Ross Perot finished his 1992 presidential run with 19 percent of the vote but started out polling at 39 percent and might well have climbed higher (beating the 43 percent with which Bill Clinton won) had he not been insane and resistant to reasonable advice from handlers. If people are sick of the two major parties, now’s the perfect time to vote Libertarian, and there’s really nothing stopping you.

Second, there’s the concern that the Libertarian vote will have no real impact except, horrors, tipping the vote in favor of one or the other of the two major parties. Always a risk, I suppose—and has there ever been a year when that mattered less? If you’re going to vote for the party of principle, the one party that still believes in the ideas of individual liberty and limited government on which the nation was founded, isn’t a year when things would otherwise just get tipped back and forth between “horrible” and “monstrous” be just the time to do it? When people told me for years there wasn’t a dime’s worth of difference between the two major parties, I was quite adamant that there was approximately one dime’s worth and that it was a dime worth fighting for. Those 10 cents have vanished (check the quantifiable results instead of the rhetoric if you don’t believe me). Time to move on.

Third, there’s the worry that the Libertarians disagree with you on some specific issue X. Right, I’m sure they do—but do the Democrats or Republicans agree with you on every last thing? I doubt it. At least you know exactly where the Libertarian Party stands—property rights yes, government no—and can adjust accordingly on the handful of issues where that might leave you disappointed. Do you think for a moment you’re going to get all that you hope for out of either of the two major parties? Will you even get the things they explicitly promise? Better to have our $4 trillion a year back to do with as we privately (alone or in collaboration) please. If you can hold your nose and vote for a major party that screws you over 80 percent of the time, you can live with the Libertarians getting one or two things wrong.

Fourth, there’s the anarchist argument that it’s wrong to vote because it simply validates an unjust system. To the extent you’re willing to talk about a vote having symbolic value, though, you can’t rationally claim it has only the symbolic content anti-voting anarchists assign to it. To an anarchist, maybe that vote means evil and willful enslavement, but you cannot stop a strong showing by the Libertarians—say, 20 percent or so, such that mainstream media has to talk about it—from meaning in a great many Americans’ minds “Things are changing and I may need to learn about the Libertarian option of less government.”

Fifth, there’s the more pragmatic-anarchist (or just mathematical/public choice) argument that your one vote is extremely unlikely to make a difference. Well, as Immanuel Kant would’ve happily explained to you, and as the anarchist argument above about symbolic value implicitly assumes, your vote has ripple effects. People talking about their willingness to vote Libertarian can lead to other people voting Libertarian. Together, they really can tip close races. People acting in concert make a difference. If they didn’t, there would be no election results at all, ever, just a perpetual hovering in a quantum state of indecision each November. (It isn’t always 2000, you know.)

Sixth, there’s the fear that votes for a rival free-market party diminish the total vote for the Republicans. Again, that’s never mattered less than it does this year, when the Republican candidate is aggressively leading the party in an anti-trade, Constitution-dismissing, authoritarian direction anyway, with Trump praising tax hikes, inflation, eminent domain, tariffs, and more—and inexplicably stilling winning over enthusiastic, deeply misguided fans. And don’t fall for arguments of the form “He’s our only hope, so he just has to turn out okay,” which is a bit like the thinking of that man in the old joke who looks for his lost car keys over and over again in vain under the street lamp because it’s the only spot where there’s any light and everywhere else is by comparison completely hopeless. If you fall for that kind of misplaced optimism, there is eight years worth of Hope and Change I’d like to sell you.

Seventh, there are the Democrats who disagree with Hillary Clinton on many things but prefer to ignore all those problems because surely the Democrats are at least better than the Republicans. Again, this year, are you so sure? Barack Obama should’ve been a disappointment to anyone who cheered his Nobel Peace Prize but paid attention during the next eight years of drone strikes and Gitmo’s continued existence. Clinton, by contrast, is an enthusiastic hawk—architect of the jihadist upsurge in Libya and bribe-taker to the world’s autocratic regimes. There are many things on which she agrees with her good family friend Trump, and I wouldn’t be surprised if his stated desire to kill Edward Snowden is one of them. Don’t vote Democrat if any of those issues matter to you.

Eighth, there’s the lingering hope that the mainstream Republicans will yet cough up someone more serious than Trump, either via an independent run or convention chicanery. Maybe so, but are you sure you want that kind of seriousness? William Kristol is so smug he manages to sound as if he’s gloating just because (lame non-candidate) Mitt Romney still takes his calls. But America didn’t want Romney when he had the full backing of the GOP, and there’s no reason to believe they’ll love him now that he’s only got about half the GOP still in his corner. Why bother? Kristol’s main complaint these days, furthermore, is that Trump—who talks about annihilating ISIS and loving war—isn’t warlike enough. It isn’t clear Kristol’s chosen corporatist/militarist/establishment standard-bearer has anything to offer you that hasn’t already been resoundingly rejected this strange year.

Ninth, for the idealists of the left, there’s still the Green Party. Well, you may love them, and I can’t stop you. But I think the Green Party is wrong about many things, and much more fond of planning and autocratic 1970s-style decrees than its harmless, leafy-green name might suggest. And if it’s really the “leaf” you care about, do keep in mind the Libertarian Party has always been committed not just to medical marijuana legalization but to complete drug legalization. It couldn’t be nearly as devastating as the war against drugs. The LP is as pro-civil-liberties as it gets while still respecting the property rights that enable you to tell hippies “Not in my yard, pal” as needed.

Tenth, there are all those people who just vote for “the devil they know” because, they admit with admirable humility, they really haven’t had a chance to familiarize themselves with the Libertarian Party candidates. Two thoughts: the Libertarians are about to make things much easier for you by picking their nominee at their Florida convention in two and a half weeks, so start focusing at that point. And if you want to bone up on the general philosophy of libertarianism in the meantime (something that will serve you well for years to come even if the Party itself ceases to exist or does something stupid), there’s always that book in my bio note below you could pick up.