Chris Kyle Is Not a Hero

When did we start awarding people for blind loyalty? 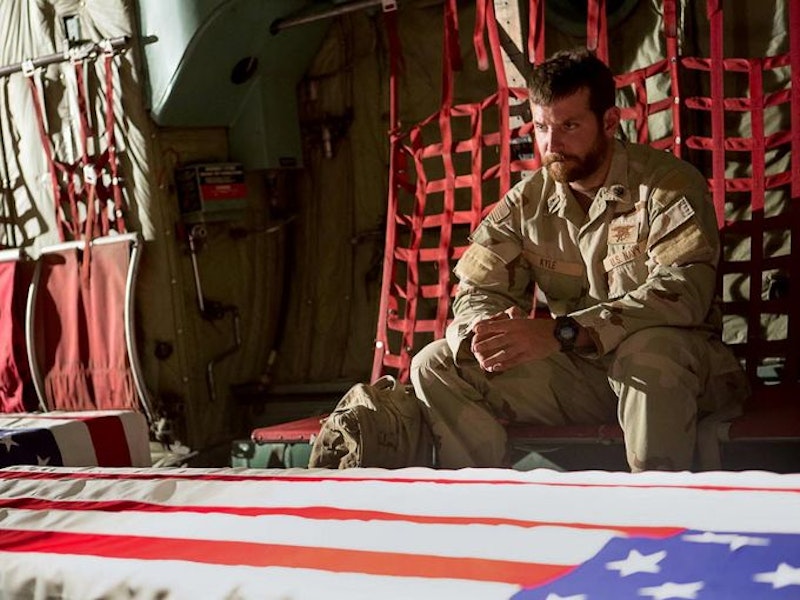 I entered the movie theater uneasy. Every lax bro in Maryland showed up at this Thursday night showing of American Sniper. Odds are that I knew someone in the crowd—I went to McDonogh, a secondary school known for its lacrosse program—and was not in the mood to make awkward small talk and insincere promises to hang out. There were plenty of other people, too—twentysomethings, thirtysomethings, middle-aged dudes, families—but I mainly noticed the 50 jocks that looked like Vineyard Vines spokesmen. I left the theater without running into anyone, but was still uneasy, this time for a different reason.

The crowd cheered. That’s what got me. It was nothing obnoxious, or even intentional, probably. Still, I stopped thinking about the crowd as a collection of stereotypes and realized they were all people cheering on mass murder. They let out muffled yelps of “Yes!” and “Oh yeah!” and “Got him!” whenever Chris Kyle, played by Bradley Cooper, shot an Arab. They were silent and respectful when Americans were killed.

This repugnant Us vs. Them mentality is pervasive throughout the film. For Kyle, questions of right and wrong were unnecessary: Arabs were “savages,” SEALs were “The Good Guys,” and, no matter what, America was always just. He saw the world in black and white, which is probably why he was such an effective soldier. This is not the fault of Clint Eastwood’s direction, which surprisingly lacks an agenda. He approaches the film with such objectivity that it appears he has no opinion at all. Kyle is not given a dramatic arc so he resonates better with audiences. His character development, in fact, is completely stagnant: he goes through the entire film with the same antiquated attitude, never questioning his devotion to the U.S. government. Unerring loyalty was Kyle’s most salient characteristic. To him, patriotism was synonymous with blind faith.

Facebook and Twitter are exploding with support for American Sniper. One girl from my high school posted: “Every American needs to go see American Sniper, immediately.” Another posted: “Chris Kyle is the definition of a hero.” Is that really what defines heroism? Blind faith? An early scene in the film shows a young Kyle eating dinner with his family. His father gives him a lecture about individualism. He says that there are three types of people in this world: sheep, wolves, and sheep dogs. The sheep follow people around, blindly taking orders. The wolves use force to get what they want. The sheep dogs also use force, but in a good way. Or something like that. It was a convoluted speech. The point is: the film tries to show how Kyle lived his life as a sheep dog, but that’s not entirely true. He protected his own, yes, but, more broadly, he was simply an incredibly useful cog in the military system, a success story in the field of brainwashing propaganda, ready at any moment to spit out unsubstantiated clichés like “America is the greatest country in the world.”

I have nothing against Chris Kyle. His death was an absolute tragedy, and, by all indications, he was a great guy. That doesn’t make him a hero, though. He was a talented sniper who knew how to take orders. Are people dubbing him a hero for that reason, or is it because he was American? It’s disturbing to think about, but a nearly identical film could have been made about Mustafa, a Syrian sniper just as deadly as Kyle. He isn’t a hero, though. He’s not even human, according to the crowd. He’s just a Bad Guy, and we should be glad he’s dead. Right? How else would we win?