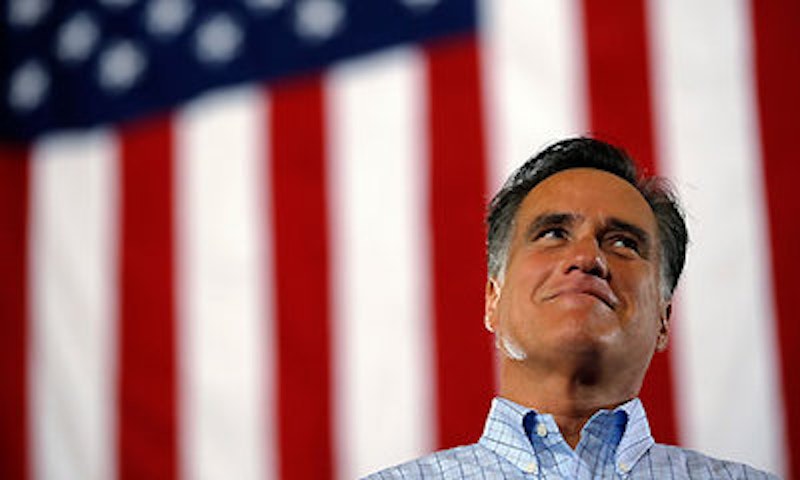 Mitt Romney, 2016? As a liberal, I like the idea, though maybe not for the reasons you'd think.

Yes, Mitt Romney is reportedly gearing up to try again for the presidency. Pundits and, presumably, many voters are incredulous; as Jonathan Chait says, "Why would Republicans, who grudgingly submitted to a Romney nomination in 2012 only after every other possibility had exhausted itself, give him another try when so many alternatives are available?" More than that, why would Republicans nominate a guy who has already lost twice? Losing once could be an accident. Losing twice starts to look like carelessness.

As a liberal, I’d like the Republican nominee to lose; I prefer Democrats in office, for all their faults. That seems like a good reason for me to be pleased with a Romney candidacy. He's lost before; I would be happy to see him lose again. Nominate that dude, and/or throw him in the briar patch, whichever comes first.

But I don't actually think Romney would necessarily lose, if nominated. He lost last time, and people blamed it on his stiffness, or the gaffe where he sneered at 47% of the electorate, or the ease with which the Obama campaign painted him as an out-of-touch plutocrat. But the truth is Romney did about as well as you'd expect a generic Republican candidate to do given the economy. If the economy continues to improve, Romney will lose; if there's a recession, he'll probably win. That's the case for whichever candidate the Republicans nominate (unless they nominate someone clearly unqualified, like Ben Carson, which is why they won't do that.)

So, if Romney can win, why would I want the Republicans to nominate him? Again, if the economy tanks, we're going to get a Republican president, whether I like it or not. That means one of the candidates currently on offer will be president, and the question becomes which flavor of ick I'd prefer. Chris Christie appears to be a thuggish bully—the country tried that with Nixon and it turned out badly. Rick Perry's gay-baiting last cycle was unforgivable, and I’ve not forgiven him. And as far as knee-jerk cultural conservatism bullshit goes, Mike Huckabee would be even worse. A Scott Walker victory would be an endorsement of gutting unions on a national level. Rand Paul's libertarianism makes him somewhat tempting… but I suspect that the things that make a liberal like me find him appealing (foreign policy, civil liberties) make it impossible for him to get the nomination.

The Republican field is large. Jeb Bush seems like he's relatively reasonable as these things go, and smarter than his brother (a low bar, but better to clear it than not.) I don't know much about Marco Rubio, although his vacillating posturing on immigration and Cuba is sort of pitiful, but that's politics for you.

Still, while Bush and Rubio don't (at this point) strike terror in my heart, I know Romney better. I don't want him to be president; I wouldn't vote for him for under any reasonable circumstance I can think of. But he's not insane, corrupt or thuggish; he's willing to compromise (to put it mildly.) He's a known quantity, and while that isn't inspiring, it’s relatively safe, given the alternatives. It's hard to believe that Republicans will make quite that calculation in selecting their nominee—but if they did, this liberal would be happy enough.