Bill Curry says the ancient Democratic leadership is leading the party to extinction. 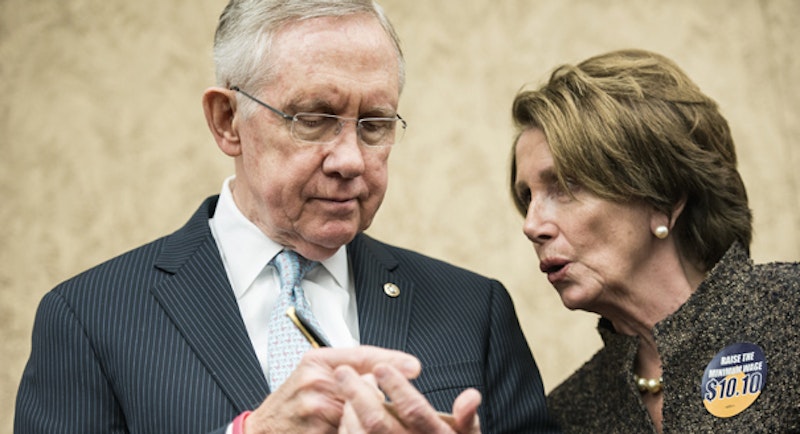 Bill Curry, a former counselor to Bill Clinton and twice-defeated gubernatorial candidate in Connecticut, wrote a very strange, if interesting, article for Salon several days ago. It’s a long screed, and worth reading since it deviates from most traditional prescriptions for a Democratic Party revival. I say “strange” because Curry (currently working on a book about President Obama) advocates that “progressives” abandon the Democrats in an act of “tough love,” and cede the 2016 presidential election to the GOP. Curry gets right to the point: “[M]ake no mistake, the Democrats’ leaders are already unconscious. If they don’t wake up soon, they’ll go the way of the Whigs. If progressives don’t wake up now, they’ll go with them.”

Man, the Whigs sure take a beating in politics when a pundit/consultant is discouraged. I remember clearly many Republican writers predicting a similar fate for their party after the Obama victories in ’08 and ’12. That didn’t happen, and it’s nearly inconceivable the Democrats will become extinct, but I like Curry’s spirit! Who are the progressives Curry is exhorting to show some spunk and take charge? He’s short on names (MN Rep. Tim Walz, 50, a veteran who lost a contest for ranking member on the House Veterans Affairs Committee to the Nancy Pelosi-backed Corrine Brown, 68, is mentioned) and says that even “progressive” savior Sen. Elizabeth Warren can’t rescue the Party. As for Hillary Clinton, Curry doesn’t mince words, writing that she’s “poised to run the same awful race in 2016 she ran in 2008.”

The bulk of his piece is reserved for bashing the likes of the Party’s “gerontocracy”: Harry Reid (75), Pelosi (74), Steny Hoyer (75), Dick Durbin (70), Chuck Schumer (64), James Clyburn (74) and Rosa DeLauro (71). Translated: hacks beholden to big-money special interests. Curry was particularly disgusted that after the Democrats’ landslide midterm loss in November none of its Congressional leaders were deposed. He writes: “Needless to say, if [Mitch] McConnell had lost the Senate in November, he’d be toast. Pelosi lost and was reinstated by voice vote. [John] Boehner won big and 24 of his members staged a coup.” I do find it curious that both Reid and Pelosi held onto their Party’s leadership of the Senate and House, respectively, but let’s be honest: Boehner and McConnell are both lead weights for the Republicans. Neither holds any firm opinions and their only ideology is retaining power and the perks they both relish.

Obviously, Curry includes the usual litany of blasts against the perfidy of the Republican Party—Iowa’s new Sen. Joni Ernst is a “celebrity pig castrator,” the GOP lies about the number of jobs passage of Keystone would create, etc.—but he saves the most bitter bile for his own.

Curry concludes: “Democrats [are preparing] for 2016 in their usual way: raising money to pay for polls, to craft ads, to woo voters. Someone must break their tragic cycle of dependency and begin to build a new model of politics and governance. We know for sure it won’t be them. How could it be? They’re practically dead.”

Likely GOP presidential candidates Scott Walker and Rand Paul ought to congratulate Curry for his forthright criticism and repeat at every dinky stop in Iowa and New Hampshire.