The President Is Perfectly Reasonable

And the state of the Union is pretty good, considering. 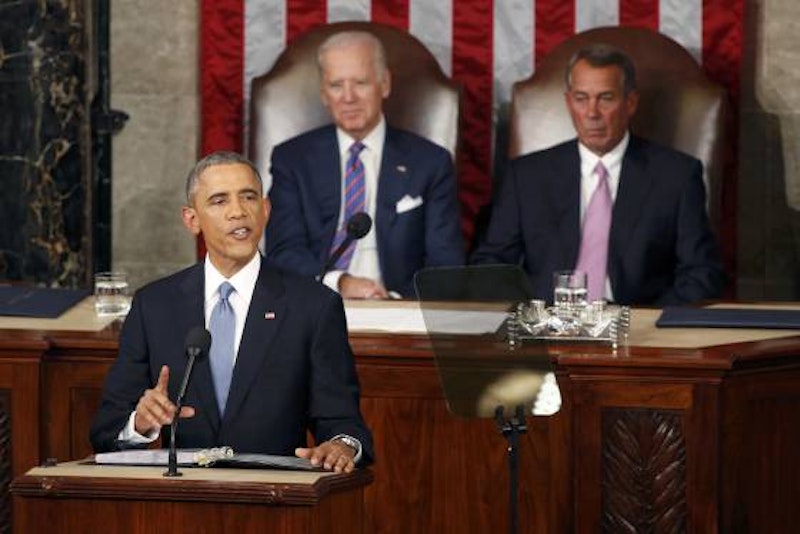 “They were young and in love in America,” the President said. Most of the Republicans sat around and looked at their devices. They didn't even stand for the traditional “The state of the Union is sound.” After the speech, NBC's reporter sized up their behavior. “Most of them... were polite,” she said, but “fidgety.” The reporter said that, for their part, the Democrats made a big noise and overstressed their support for Obama, to make up for there now being so few of them in the chamber.

At one point the Republicans tried a bit of parliament-style barracking, when they applauded at Obama's mention of “no more campaigns to run.” Obama laughed along, and then cocked his head. “That's because I won both of them,” he announced, and his side laughed hard. Then he went back to his address: “My only agenda for the next two years is the same as the one I’ve had since the day I swore an oath on the steps of,” etc.

Personally I like that style, the change-up. He's here to talk about cooperation, but he'll brush you back if you try anything funny. Somebody with that gear is a good choice, one would think, for working out livable arrangements between factions that don't trust each other. But NBC's people seemed dubious, and maybe they were on to something. Brian Williams asked Sen. Claire McCaskill about Obama's cocked-chin moment and the upset it would cause in living rooms across her state. The senator's answer, first words out of her mouth: “Our president said he is a man with flaws.” She was apologizing for him, like he had yelled at the paperboy. Of course, her home state is Missouri. Harry Reid once said the President could speak “with no Negro dialect, unless he wanted to have one.” I'd say the President had one during his cocked-chin moment. The sight and sound may have been a bit much for some people in states like Missouri and Nevada. Oddly, Brian Williams treated their misgivings as if these were the first reaction anyone might have to the President's remark. I thought the remark was peachy, right down to the accent, but that possibility didn't get a look-in from the people on the TV.

What it's all about. The President was taking credit while the taking is good. The network analysts didn't get into any of this, but the strategy was right there. Finally the economy has one figure after another that can be pointed to with pride. This crest of happy figures happened under Obama, but Obama's time is almost done. If the figures turn into good times, those may be Hillary Clinton's good times or Rand Paul's—whoever comes after Obama. So Obama is talking them up loud. He wants people to know the good times are right now, with him in office.

As regards party politics, Obama's approach is to present his policy wish list as centrism. His speech had plenty of Ron Fournier language: “There are a lot of good people here, on both sides of the aisle,” and “Imagine if we broke out of these tired old patterns,” meaning the partisan back-and-forth. Surely we can all agree, he would say, and tee up another Democratic priority. Of course, the proposals are themselves quite moderate. Half of them should’ve been bundled into the stimulus package, but senators like McCaskill wanted to show voters they could keep the price tag down. And Obama has been talking about cooperation and breaking patterns all through his career. It has done him little good with the Republicans in Congress. Today the pundits will be talking about how provocative his speech was: he talked about tax hikes!