The political consultant/fundraiser says little in his weekly column. 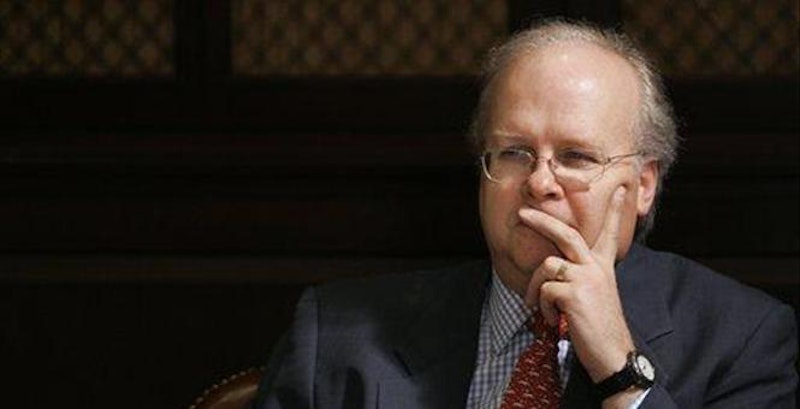 Unlike all of my liberal friends, I have no beef with Karl Rove, the ubiquitous Texan who was so instrumental in George W. Bush’s two presidential campaigns. He’s a political consultant: which means by definition, like his best counterparts on the Democratic side, he’s smart, often sleazy and trades in the grubby world of fundraising for candidates. It’s a living, a lucrative one, and by all accounts he’s a genial fellow.

What bugs me about Rove is that he’s allotted a weekly op-ed column in The Wall Street Journal (can’t blame him, a platform is a platform). Sure, there’s the disclaimer at the bottom that Rove “helped organize the political-action committee American Crossroads,” but should such a self-interested person be given space in the country’s best newspaper? I don’t think so—I’ve plenty of problems with The New York Times’ atrocious roster of columnists, but at least James Carville doesn’t appear on its pages—not only for conflict of interest reasons but also because he has nothing to say. And no wonder: expressing real opinions about politics could damage his main source of income.

It’s unlikely that Rove chooses the headline that runs above the column, but his Jan. 15 contribution illustrates my point. The headline reads, “Handicapping the 2016 GOP Primaries,” a tantalizing come-on for anyone who takes Rove’s view on the very crowded field of possible contenders seriously. So what are Rove’s ruminations on Jeb Bush, Scott Walker, Rand Paul, Chris Christie and Ted Cruz? Or, for that matter, his take on Mitt Romney—now a relic who needs an intervention to wean him off the addiction of presidential politics? None. In fact, in the entire column, Rove doesn’t mention a single candidate; instead he offers the anodyne advice that “In a large field, a candidate’s proficiency in bashing President Obama or Hillary Clinton will have surprisingly limited value. Anyone who spends an inordinate amount of energy assaulting other Republican contenders may damage himself.”

Do tell, Karl? This is all you, the mastermind of numerous winning elections (and obviously some losses) and a man once called a “GOP guru” can offer to those of us who aren’t on the inside track? In reality, there’s about a one percent chance that Rove and American Crossroads aren’t already holding intense meetings with three or four candidates, but of course he can’t reveal that since it would hurt his business.

Oh, in fairness I should note that Rove lays out a primer for the primary schedule: fewer debates than 2012 (mercifully), no January primaries or caucuses, and that the contest “will take place in the fastest news cycle ever.” Maybe I missed Rove’s appointment as chairman of the Republican National Committee.

In short, while Rove’s columns aren’t an embarrassment on the level of say, The Times’ Gail Collins or The Washington Post’s Dana Milbank (who both undoubtedly believe they’re capable of out-yukking Louis C.K. on the comedy circuit), they add little to the Journal’s Thursday op-ed page. With a stellar roster of pundits that includes Holman Jenkins, Dan Henninger, Bret Stephens, Jason Riley and Kimberley Strassel, Rove’s the red herring.