I’d vote for her more enthusiastically if she was nice and a lesbian. 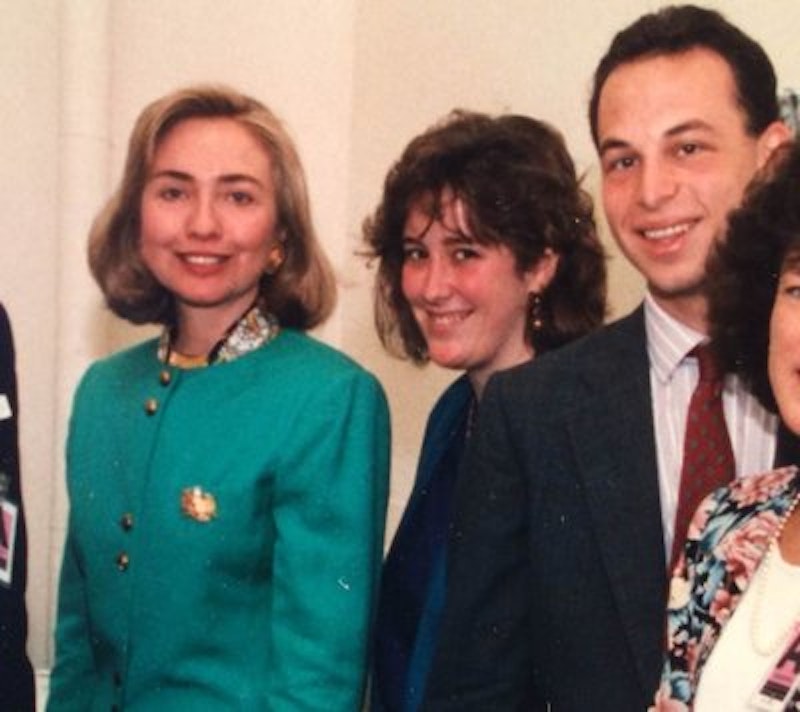 For a few months in early 1993, I worked at the White House. After college I was a medical billing and insurance manager at an orthopedic practice, and I saw something in the paper about the creation of a Health Care Task Force being formed under the newly elected President Bill Clinton; they needed billing/insurance volunteers from the medical field. I volunteered.

I was 24 years old, married with no kids, and lived close enough to take the DC Metro to Farragut West and walk the block to the Old Executive Office Building (later renamed the Eisenhower Executive Office Building). I was a volunteer versus an intern; an important distinction at a time when Monica Lewinsky walked the same halls as the very short George Stephanopoulos and myself.

During the presidential transition, the place was quite chaotic. Staff was being hired but teams weren't in place. I did whatever I was told: from envelope stuffing to once meeting with health care chief advisor Ira Magaziner to give him my thoughts on issues in medical billing and insurance (e.g. Medicare needs better technology and someone to answer the phone).

One day, a staffer stuck his head into the room I was in and asked, "Is anyone a writer?" I still hadn't written professionally back then, but hesitantly raised my hand halfway and offered that I'd been editor of my high school and college newspapers. "Good enough," he said, and I went to another room.

The next thing I knew I was drafting a health care speech to be given at a college by First Lady Hillary Clinton. I faked my way through it. The office I was working in was right across the hall from Hillary's in the traditional first lady's office suite; this was before she had her office moved to the West Wing (a controversial move).  One day, she came in to thank us. At that event and a few other times, I remember thinking she was not the warmest person I'd ever met. She posed for a photo with us.

Though seeing the 1876 grandeur of the Executive Office of the President Library was my favorite thing about the place, I attended the Easter Egg roll on the White House lawn and a volunteer appreciation event at the end of my several-months long volunteer period. I met and liked Al (funnier in person) and Tipper (dynamic, personable) Gore. When I met the tall, jovial President Clinton for the first time, he took both my hands into his large hands and looked directly into my eyes. I remember him doing this because when Hillary met you, she didn't really look at you—she looked at the next person, or out in the crowd. I thought to myself that this was how he got to be President, despite his shortcomings, because of the way he looks directly at you as though he gives a shit about you. That must be politics, I figured.

The secret service guys would brag to the young, single interns (who weren't already blowing the Prez) about their interior working knowledge of the White House residence: whispers about the fact that the President and First Lady did not share a bedroom were popular. For a few days I ended up answering phones in Hillary’s office, which of course had little to do with health care but as volunteers, we pitched in where needed. My honest impression of her friends and staff was that they were cool, powerful lesbians.

I answered the phone one day: "Office of the First Lady."

"It's me," said the voice on the other line.

"Who?" I asked, genuinely curious.

Well that was awkward.

I did my service in offering what information I could about my five or so years' experience working in medical billing and insurance though I doubt any of it went anywhere (see: Medicare) in the chaos that was the transition to a new presidential administration.

My favorite keepsake from my time there is a nametag someone made one day as a joking reference to the fact that everyone around us was scrambling for White House jobs. Below a graphic of the White House, it reads, "Hi, I'm Nobody."

As for whether Hillary Clinton would make a good president, well, if Elizabeth Warren isn't available, of course I'd vote for Hillary over whatever idiot white male douchebag Republican is running. I’d vote for her harder if she was nice and a lesbian. Despite her myriad career accomplishments and closet or no closet, I think Hillary should work on the friendly-handshake element of her personality and that it’d be cool if she went back to the White House without the guy who won't even share her bedroom, though I bet she'd send his office back over to the other building anyway.