Pelosi, Hoyer and Clyburn are too old. 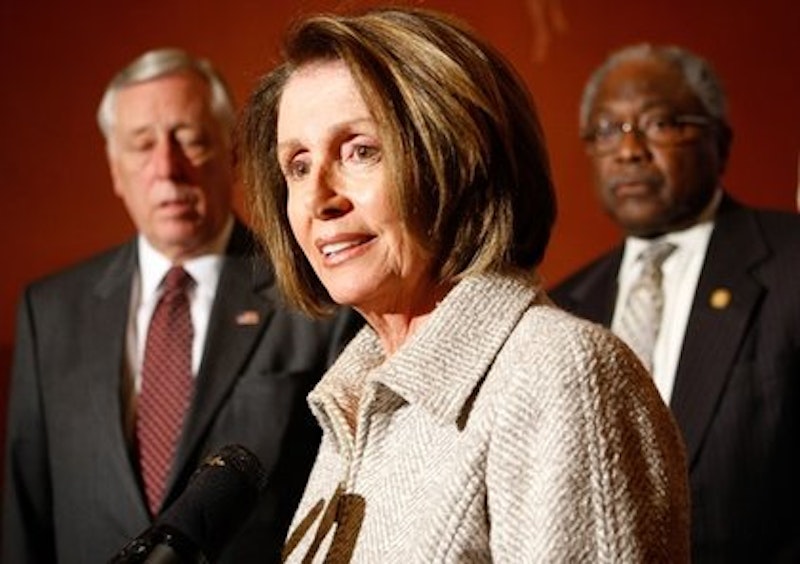 Why is the Democratic Party keeping its aging leaders?

NFL coaches whose teams go 4-12 usually get fired. So do Major League Baseball managers with lopsidedly losing records. But that’s not how it works in politics. Just take a look at the leadership team of the House Democrats, which are about to get trounced for the third straight election cycle.

Each top Democratic leader is well above 70 years old, even though the Party has a bumper crop of up-and-comers who would put on fresher faces in the public eye. House Minority Leader Nancy Pelosi of California – the first female House speaker – is 74. Her second-in-command, House Minority Whip Steny Hoyer of Maryland, is a year older. And the third-ranking House Democrat, Assistant Leader James Clyburn of South Carolina, is 74.

Waiting in the wings is a younger bunch waiting their turn to move up. There’s Debbie Wasserman Schultz, the firebrand Florida congresswoman who is also chair of the Democratic National Committee. She’s only 48. Or consider Maryland Congressman Chris Van Hollen, 55, the top Democrat on the House Budget Committee, who often plays foil to the GOP’s Paul Ryan of Wisconsin, that panel’s chairman and the 2012 Republican vice-presidential nominee.

Each would make a capable leader, who could present the Party’s message is a fresh, social media-savvy way. There’s nothing inherently wrong with an older group of leaders. But even though both crews are basically across-the-board liberals, they often come at issues in different ways. Pelosi, Hoyer and Clyburn, each born in the early 1940s, grew up in the heyday of the New Deal coalition. Their arguments for bigger government and deeper entitlements often come across as old-fashioned, labor-left, redistributionist policies.

And there’s a more practical reason for making a change—the current team is losing. Democrats scored a huge upset in the 2006 elections to reclaim the House majority they had lost a dozen years earlier. House Democrats padded their gains in 2008 as Barack Obama swept into the presidency.

Then came the tough times. In 2010 the Tea Party wave helped propel House Republicans to a 63-seat pickup, the largest in modern times. All of the House Democratic gains of the previous four years got swept away. Democrats did pick up eight new seats in 2012, but that was far from enough to climb out of the minority.

In tomorrow’s midterm elections Republicans are favored to pick up between eight and 15 House seats, according to top political analysts. Yet barring a big surprise, come Wednesday morning the Democratic leadership team will have been the same since they lost their majority.