Merkley the First Senator to Back Marijuana Legalization

Even if he’s not high-lighting the issue vociferously 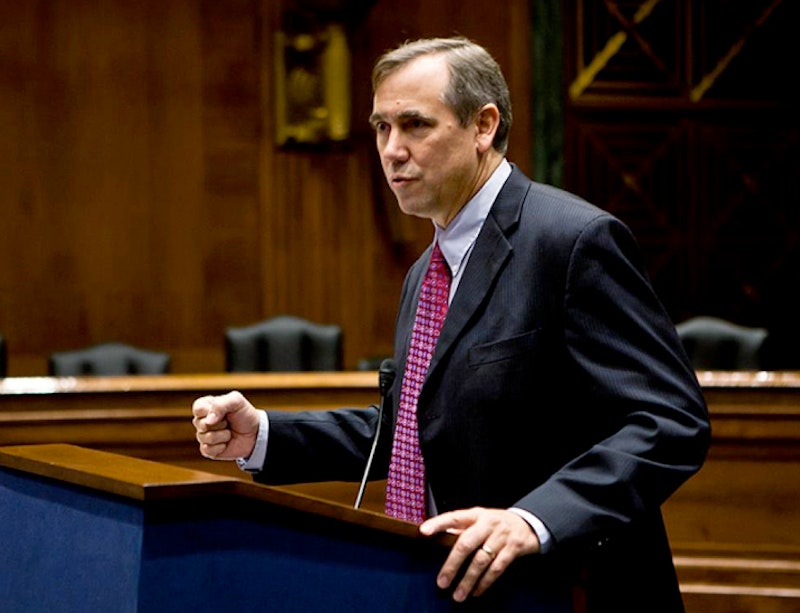 Marijuana legalization advocates now have their first senator on record supporting their cause, Oregon’s Jeff Merkley. The first-term Democrat isn’t exactly highlighting the merits of ending prohibition, but Merkley—seeking re-election on Tuesday—will at some point be able to claim bragging rights about being ahead of the curve on an issue in which public opinion is quickly shifting toward legalization.

Merkley, a former state House speaker, recently told Talking Points Memo that he (reluctantly) favors Oregon’s Measure 91, which would legalize recreational marijuana. “I think folks on both sides of the argument make a good case,” Merkley said. “And there is concern about a series of new products—and we don’t have a real track record from Colorado and Washington. But I feel on balance that we spend a lot of money on our criminal justice system in the wrong places and I lean in favor of this ballot measure.”

“Legalization” remains a fuzzy term legally. While Colorado and Washington now have full-blown, state-operated marijuana regulatory machines up and running, the drug remains strictly illegal according to the feds. Marijuana stores usually have to use cash, since banks—almost all federally-chartered—refuse to open checking accounts, lines of credit, etc.

So it’s a big deal to have a U.S. senator speak up in favor of legalization. He joins a handful of House members who back legalization. Supporters range from Colorado liberal Democratic Rep. Jared Polis to conservative Republican Congressman Dana Rohrabacher, known for a quirky libertarian streak. Merkley’s Oregon colleague, Democratic Rep. Earl Blumenauer, is also among the House's most vocal advocates.

Marijuana legalizers contend the issue is like gay marriage, with public opinion slowly shifting over time and then quickly building up momentum for support. In Oregon, the marijuana ballot measure appears to be leading. A DHM Research poll of 500 likely voters released Oct. 14 showed the proposal ahead with 46 percent of likely voters in favor versus 36 percent against. The poll was conducted Oct. 8 to 11 and had a margin of error of 4.3 percent.

Merkley’s cautious-but-favorable tone on pot legalization doesn’t seem to be hurting him politically. He’s polling strongly against Republican rival Monica Wehby, a surgeon. In at least five polls since the start of September, he’s leading by a margin of eight to 21 percentage points.