The hate and envy of the evangelist. 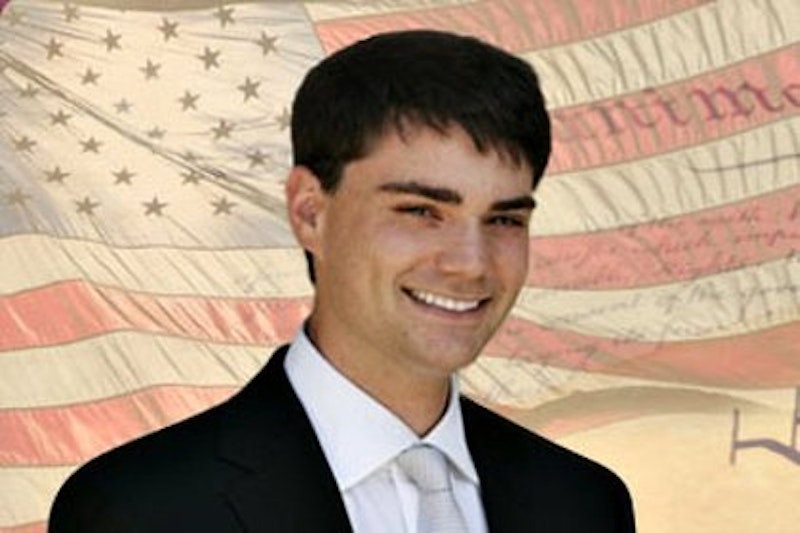 Where to start with Ben Shapiro? A big birdy sent along this story and I couldn’t resist, even though just taking a scroll through Shapiro’s Twitter feed is traumatic, worse than watching Faces of Death for the first time. Just recently:

“If Tim Cook were a religious Christian saying his company would push for traditional marriage legislation, he would be boycotted/fired.”

“There is NOTHING wrong with Jews visiting the most holy site in Judaism. If you want to ban them, you are an anti-Semite.”

“Here's everything you need to know about the Michael Brown case, and why the racist mob won't stop: https://www.youtube.com/watch?v=KMSO0CXnYtE&list=UUy9VHF_ihqzBsx9tr0_XZIQ …”

“Michael Brown was not killed because he was a Gentle Giant walking while black. Busting the myth: http://www.truthrevolt.org/videos/ben-shapiro-myth-or-true-story-michael-brown-gentle-giant …”

I sort of remember seeing Shapiro spew on MSNBC a couple of years ago during the presidential campaign. His face is recognizable and punchable. Not that I’d ever advocate violence against a morally suspect journalist—he’ll dig his own grave (see above). I don’t have time to draft a manifesto on why this guy sucks in totality so we’ll laser in on his piece for Townhall, “Turn Down for What?,” published on Wednesday. Shapiro is Young Republican Scum, a hateful Orthodox Jew evangelizing for morality while covering all his bases in dismissing and denigrating every minority expected of a human wheat-mill. Shapiro is painfully uncool and harbors resentment and insecurity about his outdated and increasingly obsolete worldview. “Traditional marriage”? What is this, 2004?

I’m losing track! In Wednesday’s piece, Shapiro talks about listening to the radio in an Uber driven by an “elderly Russian chap.” Top 40 was playing “Habits” by Tove Lo and “Turn Down for What” by DJ Snake & Lil Jon. His assessment of both party songs: “The end of Western civilization, it turns out, comes with both a bang and a whimper. The bang: endless sex, animalistic, primal, without strings.” When he implores Tove Lo not to go to those awful “sex clubs” multiple times, it’s hard not to read his irritation and tut-tutting as serious, deep-seated envy. “Turn down for what? For survival. Or we could just keep going to sex clubs, throwing up in the bathtub and drinking up all our money. After all, isn't that what freedom from consequences—our God-given pursuit of happiness, according to the left—is all about?”

Blood pressure… rising. ”From what are these people running? Drugs and alcohol are an escape—but we are the most prosperous society on the planet. We are wealthier and healthier than any nation in history. So why the angst?”

Running from people like you, Ben! This is not a healthy or wealthy country. We’re at a crossroads in human history: the planet is slowly giving up and technology will develop beyond our wildest dreams within our lifetime. There’s an enormous amount of cognitive dissonance growing up as an American, because we don’t have an ideology other than the individual, which naturally leads to crippling loneliness, depression, and anxiety. Feeling lost. People look and go to different things to obscure the emptiness endemic to our society: drugs, art, religion, food. It’s all the same bag.

I’m envious of true believers, because they know they’re set, and have rules to follow: God is Good, visit the holy land. I’m not going to get into a whole Hitchens rant but partying and praying come from the same place: wanting to feel alive, to be a part of something bigger than yourself. It can be so mystifying when evangelists like Shapiro so readily dismiss and insult gays and blacks, but I know deep down in a lot of true believers’ hearts, they are insecure, and they don’t know about this whole God/Yahweh thing, if he’s up there, if he’s there at all. And as the world turns and religion becomes more marginalized (as it should be), the whole belief system’s integrity is compromised and damaged. You’ve been duped, Ben. Just don’t take it out on the rest of the world.