Will Al Franken Be Funny Now?

One-time humorist has been oh-so-serious in the Senate. 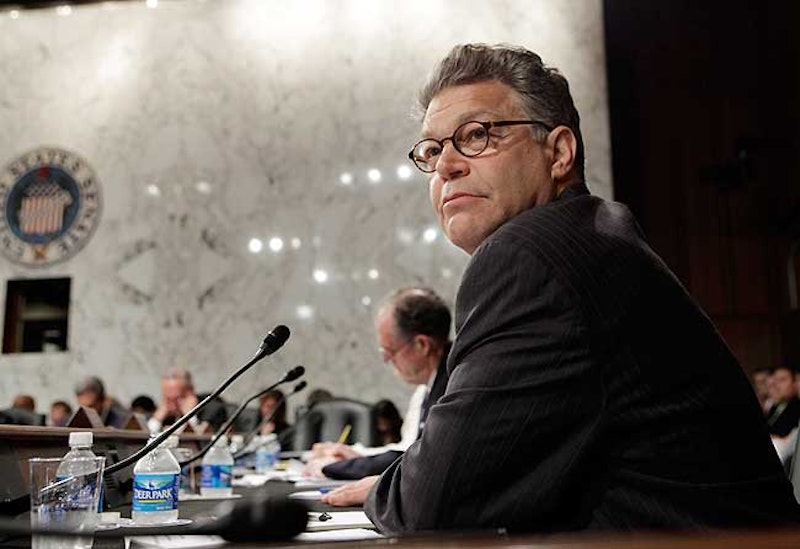 Some people used to consider Al Franken funny. You wouldn’t know it from his first Senate term, but now he may able to show off his comical bona fides.

The Minnesota Democrat cruised to victory Tuesday over Republican challenger Mike McFadden, 53-43 percent. That’s a big improvement form Franken’s first Senate run, in 2008. Franken’s lead over Republican Sen. Norm Coleman that year was so small that a protracted dispute over the results kept the former liberal provocateur from being sworn in until July 2009—six months after his new colleagues.

During that campaign Franken downplayed his pre-Senate career as an SNL comedian and liberal satirist, to establish himself as a serious-minded legislator. That continued once Franken, 63, took office. Franken “generally shuns the national media unless it's to talk about one of his obscure pet issues, such as corporate media mergers or net neutrality,” The Los Angeles Times wrote. “One of the more noteworthy aspects of the former comic's first Senate term has been his effort to avoid the spotlight and to play against type.”

Having romped to a second term Franken would seem to have more licenses to play up his humorous side. Franken served several stints on SNL as a writer and occasional actor. He left the show in 1995 and began working as apolitical commentator. He wrote four Republican-skewering books, including Rush Limbaugh Is a Big Fat Idiot, and Lies and the Lying Liars Who Tell Them: A Fair and Balanced Look at the Right.

Of course Franken’s brand of humor has always been an acquired taste. His most memorable character was Stuart Smalley, an obnoxious self-help guru.

In the Senate, Franken’s voting record has been mostly down-the-line liberal. “After the December 2012 school massacre in Newtown, Conn., he introduced a bill authorizing $200 million in grant funding annually for schools to expand mental health services,” notes the 2014 Almanac of American Politics. “In May 2010, the Senate voted 64-34 in favor of his amendment requiring the Securities and Exchange Commission to appoint an investor-led board to select securities ratings firms on a rotating basis.”

Franken’s Senate colleagues seem to have taken him seriously in his first term. But there has been friction. As Politico reported in August 2010:

When Senate Minority Leader Mitch McConnell laid out his opposition to Elena Kagan’s Supreme Court nomination, someone in the chamber appeared to be moving around in his chair, gasping and rolling his eyes.

It was Sen. Al Franken.

Moments before Kagan’s confirmation vote Thursday, the Minnesota Democrat was presiding over the Senate — and the Kentucky Republican thought the freshman senator was mocking his speech. Upon the conclusion of his remarks, a very irritated McConnell removed his microphone, approached the dais and confronted the former comedian.