Whether it’s Brown or Hogan, the state’s in a transition mode. 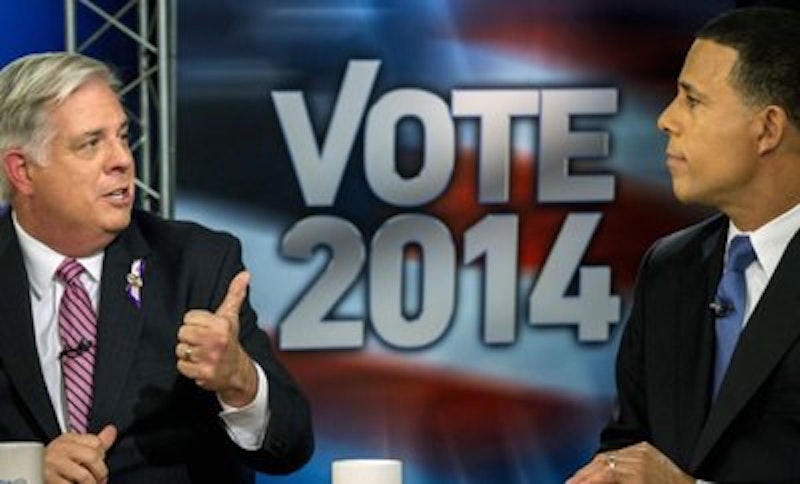 Whoever wakes up as Maryland’s governor-elect on Wednesday morning will no doubt feel compelled to hit the pause button. For the next chief executive, whether it’s Lt. Gov. Anthony Brown (D) or Larry Hogan (R), will be straddling eight years of transformative social change while ushering in a future of shrinking resources on an undercurrent of discontent. It’s a perfect time for a breather.

And for a while, or even a longer stretch if Hogan is elected, the co-governors of Maryland, in deed if not in fact, will be that manic duo of Mikes, the two strongmen of Maryland governance, Senate President Thomas V. Mike Miller (D-Calvert) and House Speaker Michael Busch (D-Anne Arundel). They are quietly hovering behind the ballot you cast.

Both Brown and Hogan know their ways around the second floor of the State House where the executive suites are spread out under the giant wooden dome. For Brown, election as governor would mean a move across the chessboard-tiled hall to more spacious accommodations. And for Hogan, election would be a homecoming to the marbled surroundings where he served four years as appointments (patronage) secretary to Gov. Robert L. Ehrlich Jr. (R).

First comes the transition, kind of a period of suspended animation when everyone fakes humility over the honor of being chosen. The out-with-the-old, in-with-the-new is a daily drizzle of staff appointments, committee formations and policy hints that belie any preparation for the kinds of decisions that have to be made as governor. For whoever assumes the governorship inherits a swatch of IOUs and an electorate that has, after eight years of gonzo governing, suddenly grown disenchanted with the fiscal burden heaped upon them.

Brown is itching to be his own man after eight years of serving as a prop, frankly, because it’s legally required. Yet with Brown, the point of departure will not be a bold fingerprint but, as he has promised, a series of study commissions, reviews and reassessments, especially of the tax code.

Brown has said that he wants to make certain the application of the tax burden is fair and balanced at the same time he has promised there will be no new taxes under his administration, a worrisome pledge he will likely regret but find a cause to blame. Much of Brown’s blather was reactionary to Hogan’s compelling meme of over-taxation.

Hogan, too, has been preoccupied with taxes as the fulcrum of his campaign and the issue aimed pointedly at Brown as an accomplice in their enactment. Hogan will be busy, as well, with studies and reviews as he thrashes about to fulfill his promise to ferret out waste in government and to cut some of the 40 taxes, by his count, that were imposed by the departing Gov. Martin O’Malley (D), especially the reviled and sardonically dubbed “rain tax,” levied on nine watershed subdivisions under federal EPA dictate to help sanitize the Chesapeake Bay.

Hogan will discover the hard way, and there’s a suspicion that he already knowingly winks, that Maryland’s budget is necessarily a pretty lean product. O’Malley, to his credit, has done a workman-like job of pruning the budget during the lingering recessionary downturn that marked many of his years in office and he has kept the annual average growth rate down to a manageable three percent. More to the point, fully 80 percent of the budget is mandated, a hands-off formula that requires an act of legislative ju-jitsu to undo.

The governor, along with the General Assembly, must often choose among programs that are desirable and those that are essential. The centerpiece of Brown’s campaign has been the expansion of pre-K for every child in Maryland. This is an expensive proposal, the liberal cause du jour as a way of leveling the sandbox, in the hundreds of millions of dollars for which no funding source has been advanced, except for Brown’s suggestion that he’ll pay for the program out of casino proceeds. Casino revenue, as every recent study shows, is a source of diminishing returns.

Hogan has been less expansive, though he says he supports the broadening of pre-K. He had also been accused of planning to cut the school construction program, which varies from year to year anyway, but has promised not to cut a cent from the funds that help build and maintain local schools. It is underwritten through the sale of bonds. So in a sense, Brown is far more radical than Hogan, though you’d never believe it by the trashy campaign Brown ran against Hogan.

The environment is another point of departure, denoted as much by political party as it is by empirical evidence. Brown clings to the liberal line of continuing the current policy of decontaminating the Bay and treading cautiously on exploration for energy sources.

Hogan, to the contrary, believes the blame for Bay toxins is misplaced and overstated. And, above all, Hogan wants to frack, shorthand for the controversial hydraulic fracturing of shale. “We’re sitting on a gold mine,” Hogan has said of drilling for natural gas on Western Maryland land.

And forget about reproductive rights and controls on gun ownership. They’re already state law and changing them is almost impossible, though many remain suspicious of Hogan’s true motives. Voters know that Brown is in the pocket of unions; it remains to be seen whether Hogan will bend over for business even though he has promised corporate tax breaks, an adjustment Brown would likely follow to assuage the business community and to shuck the pro-tax mantle that he inherits.

So much for promises, policies and politics. Truth be told, Maryland is in a transitional mode. It is traveling an undetermined path from a state that relied heavily on government grants and employment to an uncertain future that has yet to be established. The clucking you hear in the distance is the sound of chickens coming home to roost: Maryland’s economy is not as diverse as it was once cracked up to be.

The state’s economy suffered greatly during the cutbacks in federal spending.  Maryland’s unemployment rate is 6.3 percent, above the national average of 5.9 percent. And there are, at last count, 502,200 people on government payrolls, according to reports. For decades, the Maryland unemployment rate was always lower than the federal number because of the federal presence in the state. The threshold figure for government employment was 26 percent of the total workforce, a chronic dependency that is petering out.

To begin with, the budget that will be introduced in January will be largely O’Malley’s handiwork because of the synchronicity of the budget deadline and the inauguration of the new governor, both dates fixed by law. The incoming governor’s imprint, if any, is usually made later through budget amendments and supplemental budgets.

Right now Maryland has a $450 million shortfall in revenue because of a drop-off in income tax collections, a result of the high unemployment rate and the number of people who have left the workforce. The state, once again, is facing a structural deficit.

Maryland has about reached its bonding capacity and in order to continue selling general obligation bonds at low interest rates the state’s share of the property tax would have to be increased. And not long ago, the state’s transportation fund was so depleted that it lacked the bonding capacity to pay for the BWI-Thurgood Marshall expansion of the Southwest Airlines terminal. The state was forced to use MEDCO revenue bonds to finance the deal.

So don’t start talking about mandates. There’s only one mandate in the State House—24 votes in the Senate and 71 in the House. If you have those numbers, you can get a lot done. Without them, you’re toast.

And here’s a final tip: forget about fussing over the mansion in public or in the media. It’s yours for four years. Enjoy it. And, above all, avoid over-use of the line about the mansion being the peoples’ house. Remember, the people can reclaim it in four years.