Alexander Hamilton Was an Authoritarian Jerk

Trying to live up to the Founding Fathers. 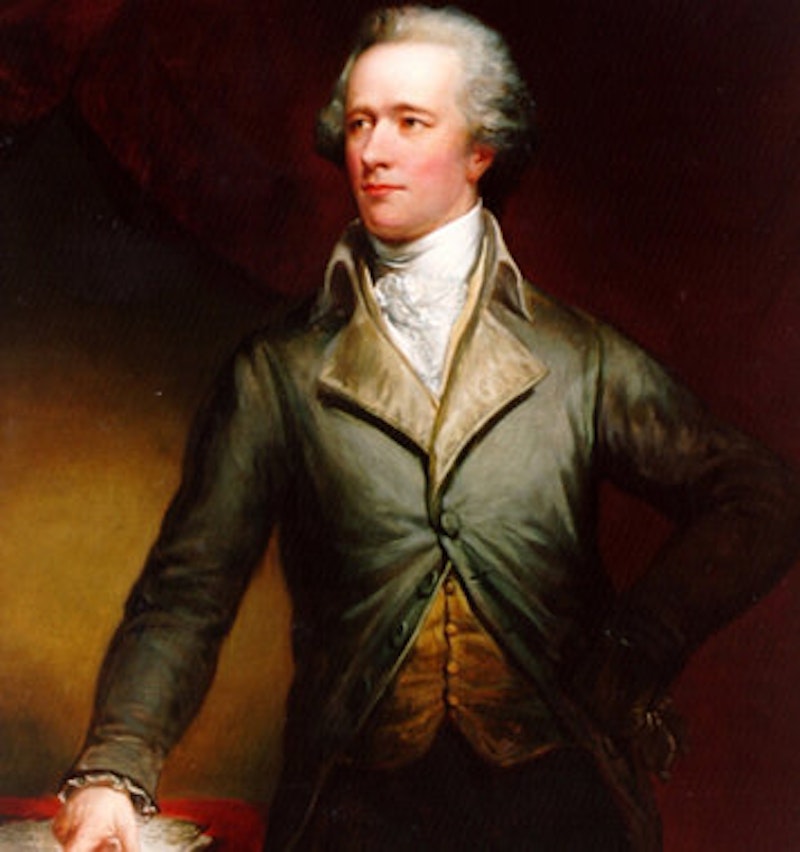 Back in high school, my AP History teacher presented American government as one long argument between Alexander Hamilton and Thomas Jefferson. On the one hand, federal centralization and unity; on the other, decentralization and liberty. Two great thinkers, founding our national discourse.

What my history teacher didn't tell us was that Hamilton was a paranoid, war-mongering loon. In the late 1790s, when Britain and France were locked in war, the Federalist President John Adams was desperately trying to maintain neutrality and not drag the US into a massive conflict for which it was not prepared. But Hamilton was thrilled at the prospect of war. In part, this was because he hated the French Revolution, and its attack on central authority and monarchy. But it was also because he figured he could use the war to attack the pro-French Republicans led by Jefferson, a man who he later denounced as "an atheist in religion and a fanatic in politics." Placed at the head of an army raised to repel a possible French invasion, Hamilton got it into his head that Virginia was arming against the central government, and almost marched on the state. Dissuaded from starting a Civil War, he turned instead to infringement of civil liberties. After some initial hesitation, he supported the notorious 1798 Alien and Sedition acts to limit immigration and punish dissent. Then, when Adams managed to secure peace with France, Hamilton was so upset that he wrote a 50 page diatribe denouncing Adams and concluding that the President had lost "the respect of friends and foes" alike.

So, in sum, Hamilton was bitterly partisan, eager to engage in avoidable wars, and prone to using the machinery of government to stifle dissent and persecute his enemies, real and imagined. He sounds remarkably like Dick Cheney.

What's interesting in comparing Hamilton to Cheney is that, while the behavior seems consistent, the political terms don't quite match up. Hamilton was a statist big government anti-revolutionary who wanted to increase centralized federal power. Cheney was… what? In theory the Republican Party doesn't like big government. But in practice Cheney was for everything that Hamilton was for—militarization, civil liberties infringement in the name of crushing internal enemies, the works.

People often talk as if political tension is worse now than it ever was, but as far as I can tell Hamilton was actually more scurrilously partisan than Cheney. There are Republicans who will insist outright that their opponents are traitorous scum, but they don't tend to be leaders; even Cheney was at least somewhat circumspect in this regard. But Hamilton, one of the most influential Federalists, pretty much came out and said his opponents would betray us all to the French regicides.

The difference, then, isn't so much the partisanship as the fact that with Hamilton and Jefferson, the partisanship made more sense. Maybe it was because the battle lines were new back then, or maybe because the revolutionary anti-government libertarians hadn't ever been in power yet, or maybe because everything got scrambled when the U.S. became an imperialist superpower.

In any case, the point is, in those early days, when America was America and men wore wigs, the pro big intrusive government authoritarians were pro big intrusive government authoritarians. They didn't demand enormous armies on the one hand and bewail the power of centralized government on the other. They were pseudo-monarchists and proud of it. And, similarly, the radical anti-government men like Jefferson were really anti-government; they were radicals who supported the French Revolution even on up to (in Jefferson's case) the Terror. Jefferson declared he would rather see, "half of the earth desolated; were there but an Adam and an Eve left in every country, and left free, it would be better than as it now is." When he said he believed in liberty, he meant he believed in liberty for everybody. Except the slaves, of course.

In short, back then we had a clear choice between naked paranoia and open hypocrisy. Now, in these decadent times, it's hard to tell which is which.