Gansler needs a suitable running mate before he can file. 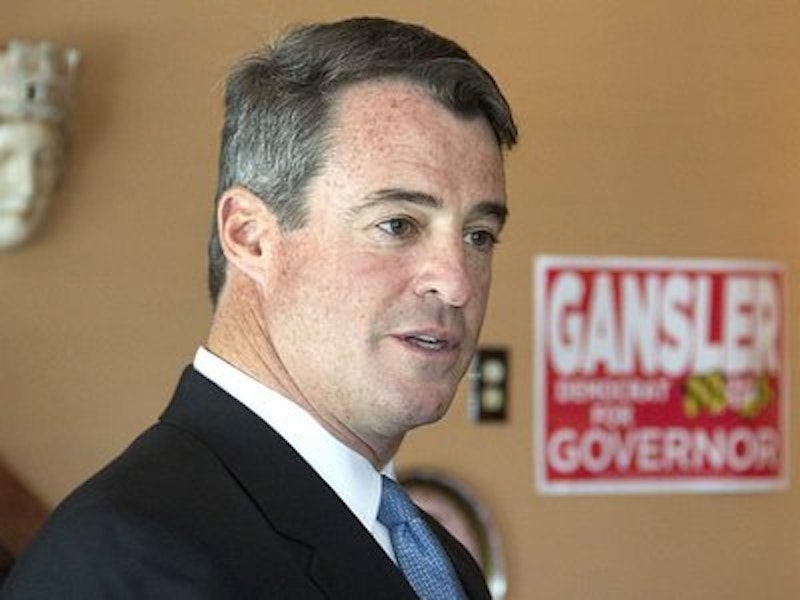 Douglas F. Gansler did exactly what he promised. The Maryland attorney general announced his candidacy for governor on a fine autumn day to avoid the distraction, clutter and inattention of an earlier summer pronouncement. So now he must deal with the distraction, clutter and inattention wrought by the Ravens, Halloween, Thanksgiving, Christmas, Hanukkah, Kwanzaa and New Year’s.

And after the calendar flips to 2014, Gansler, like other state elected officials, will be prohibited for three months from fundraising during the 90-day General Assembly session. And lickety-split, it’s June 24, primary election day. Oh, by the way, despite all the other commotion around him, Gansler still has to find a suitable running mate before he can file, because under Maryland law they must appear stapled together to sign the appropriate papers. Gansler’s understudy must be black, according to his own testimony, because of the intense pressure he’s under. Thus, he has devalued the franchise by saying what others only think.

Nonetheless, he has a list of possible side-kicks, short or long, nobody really knows except him, that includes: Baltimore Del. Keiffer Mitchell, Comptroller Joan Pratt, Former Rep. and NAACP honcho Kweisi Mfume and Prince George’s Del. Jolene Ivy, to name the known. Gansler has said he will announce a running mate sometime in October.

So what’s a candidate to do? Maryland primaries had been held in September for the past 60 years when they were switched from May. That shift was executed for the cynical purpose of compressing the time between the primary and November general elections to deny Republicans enough time to regroup for the big showdown with Democrats. The primary was moved to June this year to accommodate the new federal requirements for absentee ballots.

Though Gansler did not formally announce until Sept. 24, he had a slow but steady informal rollout of his campaign over the past couple of months, hitting the high notes of issues he’s committed to as well as topicality ripped fresh from the headlines—an expansion of high-speed rail transportation, increase in the minimum wage, increased minority employment, reduction in the corporate tax rate and supplying tablets to prison inmates. Huh?

But above all, Gansler has planted his flag and staked his claim as an outlier candidate. He was reported as saying: “I’m not your candidate if you want the status quo… The entrenched political establishment, the machine, the special interest groups, the Annapolis lobbyists would like to make that choice for you. But it is the people who actually decide who will be the next governor.”

Every candidate says that, but few actually mean it. Those who proclaim it the loudest are those who don’t have the support of the political establishment. Nonetheless, Gansler’s statement was pointed like a stiletto directly at his principal Democratic rival, Lt. Gov. Anthony Brown. While Gansler was lollygagging though the summer, Brown was busy toting up an impressive list of endorsements that embraces nearly all the Maryland Democratic party’s ministers of influence.

There was a remarkable quote attributed to Todd Eberly, a political science professor and blogger at St. Mary’s College, in Southern Maryland, in The Sun’s early online story about Gansler’s announcement. It later vanished from the screen as well as the next day’s printed version. Was somebody embarrassed? Reconstructed, it went essentially like this: “Every political scientist who has studied the value of endorsements has concluded that they mean nothing.”

Politics is a form-follows-function kind of business. Argue, if you will, but it’s still better to have endorsements than not. And politicians who make such statements are usually those who can’t get endorsements. Endorsements are a source of their own momentum. They supply energy and confidence to a campaign not to mention the headlines they produce. Endorsements spread like contagion and influence others. There’s nothing as compelling in politics as looking like a winner. And most voters like to be with a winner.

But more than that, endorsements convey an appearance of invincibility that, in turn, generates money and support and ultimately a voter network and support system on election day, when endorsements really count. Or else why would Gansler, Brown and the third declared Democrat, Del. Helen Mizeur, of Montgomery County, be maneuvering frantically to win the endorsement of the AFL-CIO? Or Gansler claiming he’ll have his share of endorsements? There have actually been instances where a pile-up of endorsements by one candidate helped to drive challengers out of a race.

Eberly, with all due respect, may never been on the inside of a major campaign on the days when sample ballots are designed and walk-around money is dispatched. They are the days when endorsements spring to life and translate to votes. Each one of the endorsers—Gov. Martin O’Malley, Sen. Barbara Mikulski, Mayor Stephanie Rawlings-Blake, Rep. Elijah Cummings, Rep. John Sarbanes, Sen. Thomas V. Mike Miller—and all of the other Democratic big cheeses who’ve endorsed Brown, have political organizations and loyalists of their own which they’re expected to deliver for the candidate of their choice on election day.

O’Malley has an efficient statewide organization which has proved its toughness and skill in two elections for governor and on several occasions that involved ballot questions. And Rawlings-Blake commands a loyal following among the black matriarchy, which has evolved as the bedrock of Baltimore City’s vote.

The professorial Eberly might instruct his classes to dismiss such observations as political taxidermy or a lament for the good old days, but getting out the vote is what primary elections are all about. It’s flabbergasting to learn how many of those who practice, teach and write about politics don’t understand the difference between primary and general elections.

Triangulation is the watchword for this Democratic primary if all the starters remain in the race. Montgomery County will be the key battleground for Gansler and Mizeur. Both Gansler and Mizeur are from MoCo, where voter turnout could define the face-off between the two and influence the outcome of the primary. Gansler has left a paper trail of missteps from his two terms as MoCo state’s attorney

Anyone who needs Cliff’s Notes for the 2014 election ought to consider the 1978 contest. It was back then that Montgomery County, Gansler’s homestead, turned against, one of its own, Lt. Gov. Blair Lee 3d. Lee was the closest MoCo has ever had to a governor. He was, in fact, acting governor for a brief, besmirched time. But MoCo’s voters are a persnickety bunch. Rather than vote against their native son, MoCo voters avoided the polls in large numbers and while Lee didn’t lose his home county the low voter turnout contributed to his narrow defeat.