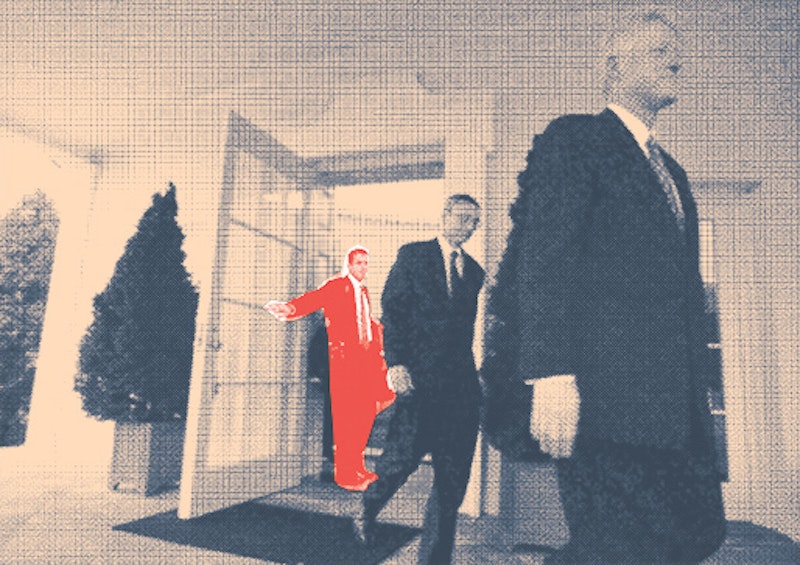 One of the best stories I’ve read in the past couple of months was in the Oct. 7 New Republic, a very lengthy (by today’s standards—which means it’ll be all but ignored) profile of Doug Band by Alex MacGillis, a rip-snorter that came to fruition after nine months of work by the author. I wouldn’t be surprised if it’s the first draft of a book, and that’d be one I’d buy right away. Briefly, MacGillis takes the reader through Band’s ambitious, kind of creepy career, which began at the lower echelons of the Bill Clinton White House, accelerated to becoming the President’s “body man” (or “butt boy” as more imperious aides joked), and, after Clinton left office, reputation in tatters, sticking with him when others wouldn’t return his calls, helping establish the philanthropic Clinton Global Initiative, and becoming a wealthy man in the process. Band, now 40, is exactly the kind of insider who would’ve fit into Mark Leibovich’s This Town, but for the fact that he’s a resident of Manhattan, or, as Band would say, the world.

Here’s the problem: The New Republic, in its rush to remain relevant and in “the conversation,” splashed MacGillis’ story on the cover, with this juicy headline: “Scandal At Clinton Inc.: How Doug Band Drove a Wedge Through An American Dynasty.” (Inside, the story has a more modest headline, “The Body Man.”) It’s not quite a BuzzFeed tactic, but clearly wading in those filthy waters. A couple of thoughts. First, though Band is certainly avaricious, self-aggrandizing, not averse to mixing with dubious millionaires, and shamelessly capitalizing on his relationship with Clinton, he’s never been arrested, and though Clinton associates now keep him at arms-length (for now, since he’s a prodigious fund-raiser), there is no “scandal.” Second, if the political careers of Bill and Hillary Clinton constitute an “American Dynasty,” it simply demonstrates the shallowness of today’s mixed-up media. In addition, although MacGillis devotes little space to Hillary Clinton’s possible 2016 presidential run, the implication—the “currency peg” for zealous New Republic editors—is that Band will be a huge problem for the former first lady, senator, secretary of state and failed ’08 contender to overcome.

I’ve no idea whether Hillary Clinton will run for the Democratic nomination—and routinely ignore the daily stories about her aspirations—but if so, she has bigger hurdles than the Band connection to surmount. She’s now 65, looks it, and like it or not, there remains a double-standard for “old” politicians. Ronald Reagan got away with it. But Hillary, once candid photos start appearing, will have a problem. Also, she was completely out-maneuvered by Barack Obama in ‘08—no thanks to her husband and Band, who advocated aggressive tactics against the freshman senator—and there’s no public evidence that she (and her staff) have adapted to modern campaigning. She’d knock off Joe Biden, but so could my postal carrier in North Baltimore.

All of this obscures MacGillis’ portrait of a man on the make (and there are any number of them), someone who parlays his “sweat equity” into personal riches and power. Band, who now runs Teneo, a “corporate advisory firm,” with Irish businessman Declan Kelly, is, by MacGillis’ telling, a sleazy entrepreneur who spun his card games and Blackberry communications with Clinton into gold.

He writes: “In Band’s early days in New York, a night out meant pizza and beer with old White House pals. Now, he was a regular at Cipriani and frequented A-list nightclubs like Bungalow 8. He wasn’t much of a drinker—he just liked being on the scene. For a while, he had dated super-model Naomi Campbell… He had been known to carry cash in rolls of $100 bills.” Band would also make reservations at swank, trendy restaurants under Clinton’s name and then arrive with his own entourage, but not the former president.

Good stuff. Great stuff. But a “scandal”? Taking advantage of connections with popular politicians and making money off that relationship is so commonplace that MacGillis could write a weekly column for TNR on that very subject.