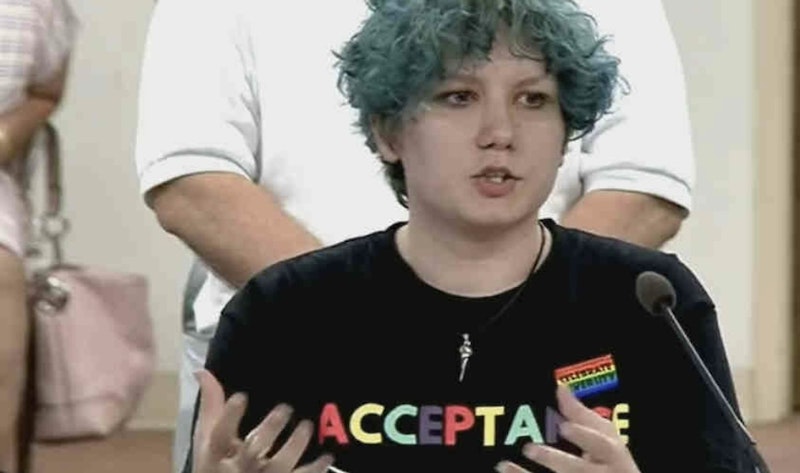 This weekend I attended my first Pride festival. Even here on Maryland’s rural Eastern Shore, our community put together a festival filled with good music, food and my favorite, talented drag performers. Meanwhile, other parts of the state are suffering in the Pride department. In Baltimore, police are investigating arson at a home where a pride flag was displayed for a possible hate crime and to the west, schools are banning pride flags.

It’s maddening, but it happened here in Maryland during Pride month. Carroll County school board voted 4-1 (thank you for your dissent and support of teachers and students, Dr. Patricia Dorsey) to outlaw the display of Pride flags in the school system. They didn’t specifically use those words in the policy, choosing much more patriotic, heavily nationalistic (bordering on YMCA-playing MAGA-hat wearing) language stating that “the love of freedom and democracy, shown in the devotion of all true and patriotic Americans to their flag and country, shall be instilled in the hearts and minds of the students attending Carroll County Public Schools.” (What is this, the War of 1812?)

When the policy was approved that essentially forced teachers who’d hung Pride flags in their classrooms in support of marginalized, bullied students to remove them, I posted to social media. I’m a newly minted member of the LGBTQIA+ community myself, having only posted a coming out article and video last month at age 53, so it’s a very freshly-constructed soap box over here, but as a journalist it’s impossible for me to remain quiet when idiot behavior is happening around me—even as an ally I’ve written in support of the community, and in coming out posts recently my favorite messages were the ones that simply said “Welcome to the family.”

An apparently-concerned social media follower of mine who attended the school board meeting took the time to write to me to defend the board’s decision when I posted opposition to what I consider the outrageous, passive-aggressive, poorly-timed policy by the board, a blow to students attending the school who might be experiencing bullying, and had felt welcome in classrooms where teachers displayed the flag. The follower informed me that she’d attended the meeting and that the policy was “not about Pride flags,” the press was making a “gross misstatement” and the issue is “not intended to be an anti-LGBTQ issue at all” but is “meant to keep school politically neutral.”

Hmm. Politically neutral. Interesting choice of terms, in addition to denying the fact that the vote was held to outlaw Pride flags (they sure weren’t voting to have confederate flags removed), the vote was taken after student board representatives like Emilie Tedeschi voted against and opposed the measure, making a plea about the bullying mental health crisis in the school system and stating that the presence of the flags was a sign of acceptance for marginalized students.

Dr. Patricia Dorsey, who was the singular vote against the exaggeratedly nationalist, homophobic policy change made statements about stopping the bullying and making LGBTQIA+ students feel seen, and non-voting Carroll County superintendent of schools Steven Lockard agreed with her, stating that the board’s decision was a “step back,” taking a support symbol away from students.

My alma mater Western Maryland College (now McDaniel) is in Carroll County, and as a private college isn't subject to the ban, but having spent some time in that county, and living now as I do on the Eastern Shore of Maryland (another red part of the blue state in which we live), I think it’s a disgrace for anyone to have to live in a place where they’re made to feel they aren’t accepted for any reason whatsoever—skin color, sexual identity, gender, religion and beyond. For anyone to defensively act like a measure is taken on behalf of the American flag as though its display was ever in question at the expense of marginalized, bullied children is inexcusable.

The blogger who wrote to me said she was aware this “was a sensitive subject.” It needn’t be. It should simply be common sense that a school system should want to support all its students—that’s not politics, it’s education.