Solving the student debt crisis in our country. 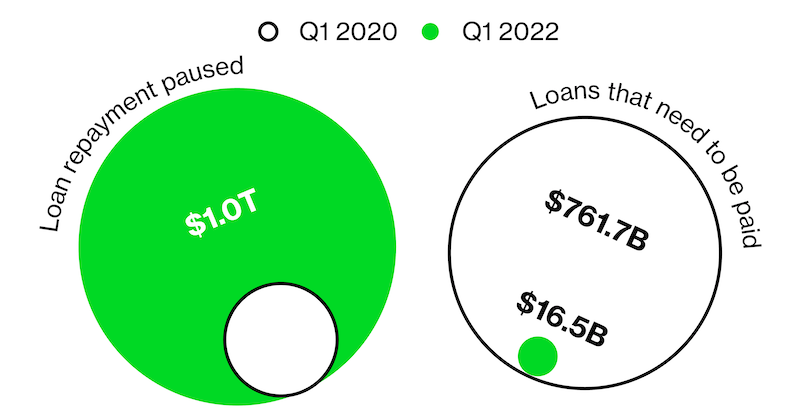 Student loan debt is a problem in the United States. American borrowers carry about $2 trillion in debt. The higher education system is a mess. The societal obsession with credentialism is nuts. And it’ll take massive reforms to the system to come anywhere close to combatting this problem. One issue worth addressing, is perhaps the most pernicious form of student loan debt: debt amassed by college dropouts. That’s why high dropout rates need addressing.

The media screws with the public perception of who we think of when we think of student loan debt carriers. We see stories about people with bachelor’s degrees with more than $200,000 in debt; sometimes, it’s someone who went to school for a low-paying major and works a low-paying job. Other times, it’s the medical school student who graduated with $450,000 in debt. Medical school students graduating with debt aren’t the biggest problem; they’re earning degrees that let them make a lot of money. There are ways to reduce costs there. Having six-year programs like the rest of the world instead of eight years is a start. However, the country faces bigger problems when it comes to student loan debt.

The more pressing issue may look more like the following scenario. Someone goes to college. For some reason, they drop out. Therefore, they’ve spent money on higher education and receive nothing in return. They obtain no degree . However, they accumulate some student loan debt and are theoretically worse off than when they started. About 40% of college students don’t graduate in six years, so this describes a lot of people. The lack of a piece of paper still makes it difficult for them to obtain certain jobs in a field of their interest, they’re poorer when they started, and there’s an opportunity cost to attending college. That's time one could spend working and making money.

As I learned from attending one year of college, many people drop out for non-academic reasons. I got all As and Bs in the year I went to Emerson College but was thrilled to quit. People drop out for various reasons. Cost is one reason. Many people work when they go to school. Some have family issues they need to attend to—including pregnancies. And some just hate school—especially when they’re surrounded by a bunch of whiny white-privileged snowflakes all day and have a 90-minute commute to school both ways.

Work-life balance (54 percent) and high costs (31percent) are the top reasons people cite for dropping out, according to Public Agenda. Those two issues seem preventable. Scheduling is an easy one. If people need to work full-time or close to full-time, consistent schooling hours may present a barrier to obtaining a degree. Online schooling exists, but it’s usually rigid like in-person classes. Online college that one can complete at their own pace could help combat this problem. Perhaps they give students six months or so to finish a specific class, and they can work on it at their own pace. The point of higher education should be to gain the skills necessary to get a job.

If the only time someone can fit that in is at three a.m. on Wednesday mornings and nine p.m. on Sunday nights, why deny them the opportunity to learn?

Some people might worry about cheating in online education, but an easy answer exists. If someone cheats their way through school and is entirely incompetent and unqualified for a position, the employer will find out. Plus, it is hard to wing your way through a job interview.

How much would it cost for a community college to administer something like this? A class of pre-recorded lectures, PowerPoint presentations, assigned readings, and so on? Maybe programs like this need a few people to grade a few assignments, but self-grading tests exist. If schools cut bloat from other departments, they'd have no problem paying for this program. The great thing about such a program is that a community college could let anyone of any age take these classes. If a bright underclassman in high school wants to earn some credits, great; they can earn a college degree by the time they finish high school.